Your enjoyment of Prometheus ultimately hinges on what you are looking to get out of the film. If, like the crew of the titular spaceship, you are looking for definitive answers or a thoroughly satisfying conclusion to the outing, you are going to walk away disappointed. But if you can simply be content to watch a beautifully-shot, well-acted suspense film with a story full of plotholes and underwhelming revelations, you’ll feel like you got your money’s worth.

Ultimately, I think I fell somewhere in between disappointed and satisfied. There are parts of the film I loved and parts that left me shaking my head.

Ridley Scott is a great director and he is able to sustain that wonderful foreboding feeling and sense of mystery established in the trailers. The main characters in this film are archeologists searching for mankind’s root deep in outer space, but the film establishes a sense early that they will not like what they find. Also, while Elizabeth Shaw (Noomi Rapace) and Charlie Holloway (Logan Marshall-Green) are there simply looking for answers to life’s greatest mysteries (Where did we come from and why are we here?), there are others on the ship with ulterior motives. Meredith Vickers (Charlize Theron), who represents the company bankrolling the operation, is looking for ways to monetize this newly-discovered planet. And David (Michael Fassbender) is a human-like android with a much darker and more mysterious hidden agenda.

The film is a slow burn. Scott is able to ratchet up the tension as the team explores the gloomy, desolate rock planet, which features a labyrinth of underground tunnels. As the film goes on, you don’t know what the team will discover, but you know it won’t be good. The sets are all lavishly created and full of little nuances that help to build and sustain that tension. 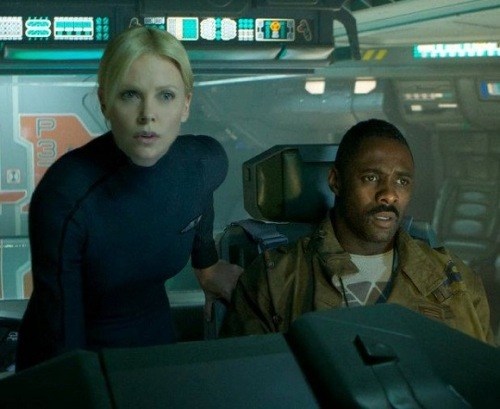 And once the film starts delivering on the terror, it’s a joy to watch. There is a truly disturbing and heart-pounding scene featuring Elizabeth Shaw alone in a medical chamber attempting to perform a procedure on herself. And there are plenty of other great moments where our band of explorers must battle against things they are wholly unprepared for.

The problem is that while the film is able to reel you in with its beautiful scenery and well-crafted pacing, the story itself doesn’t make much sense if you stop to examine it too closely. Like Weezer’s proverbial sweater, if any plot thread is tugged on, it quickly starts to unravel. So many things that happen in the film seem conveniently manufactured to advance the plot. Characters act in ways that defy logic in order to get them where they need to be. The ships ability to track the whereabouts of characters only seems to work when it isn’t needed. And events play out in a very specific way that seems to defy the odds of probability in order to manufacture a very specific ending.

Making matters worse is that most of the film’s “big reveals” are rather underwhelming. There is a revelation about Peter Weyland (Guy Pearce), the entrepreneur bankrolling the project, that is telegraphed rather early in the film. There’s also a reveal about Meredith Vickers late in the film that elicited more groans and eye rolls in my theater than actual surprise or enjoyment. The developments about the mysterious beings that Shaw and Holloway believe created mankind and their ties to the larger Alien mythos are more likely to leave you scratching your head than anything else.

Also, the film is rather heavy handed with its religious overtones, though it can’t seem to decided whether it is undercutting religion or supporting it. So it just ends up presenting the viewer with several ham-handed religious discussions that don’t seem to have much of a point. If the goal was ultimately to leave it up to you to decide, it would have been best to dial back the religious talk to maybe one or two quick conversations to establish the theme without beating you over the head with it.

The performance all around are quite good. Michael Fassbender owns every scene he’s in, making David seem robotic, but also filling the character with something deeper, perhaps a longing to understand what it’s like to be human. Noomi Rapace and Logan Marshall-Green do a good job carrying the film. Charlize Theron is also quite enjoyable, though her character is fairly one-dimensional.

The only two distracting bits of casting involve Guy Pearce as Peter Weyland and Idris Elba as the pilot Janek. Pearce is playing a very elderly man and the age make up he is given is unconvincing to the point of distraction. I can’t understand why Scott didn’t simply cast an elderly man in the role, which would have worked much better. And Elba has a rather unconvincing and spotty Southern accent, which detracts from an otherwise solid performance.

Still, the film has its pluses and minuses. I doubt you will be blown away by it, but if you are able to check your expectations, then you may enjoy it as the beautiful and fun, though ultimately not very deep, film it is. 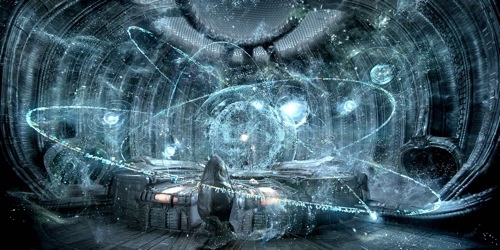