Let’s be honest, these days the key to success in Hollywood is finding ways to take something someone else came up with and simply rehash it. It’s the Family Guy approach to screenwriting. And since a wise man once said “If you can’t beat ’em, join ’em” I decided to throw my hat into the lazy screenwriter ring.

So, after spending 20 minutes on Wikipedia, I have written Hollywood’s next great summer blockbuster. So please enjoy these selected scenes from William Taft: Werewolf Wrestler while I practice my Academy Awards acceptance speech in the mirror …

However history remembers me before I was a President, it shall only remember a fraction of the truth. For whatever else I am – President, Chief Justice of the Supreme Court, Solicitor-General – first and foremost I will always be … a wrestler.

TAFT: You wanted to see me, Mr. President?

ROOSEVELT: Yes, Bill, have a seat.

ROOSEVELT: I’ve been watching your work in the Philippines. Impressive stuff. McKinley was wise to choose you.

ROOSEVELT: I have a new assignment for you, Bill. I’m going to appoint you Secretary of War. I need you to be my front line, traveling the globe to root out evil before it reaches American soil.

TAFT: Sir, I’m flattered, but why me? My expertise is in the law and in governance. Surely there must be a general more suited to the task.

ROOSEVELT: I don’t need a general. And I don’t need William Taft the judge or William Taft, Solicitor-General. There’s a darkness rising. I need a light in that darkness. And there’s only one man for the job …

Roosevelt pulls out an old tattered poster from under his desk. On it is a young William Taft in a wrestling singlet with USA embroidered on it. On his shoulder is a large, gold-plated leather belt with an eagle clutching an American flag in the center of it. Under that, there’s an inscription that reads: “Yale Intramural Heavyweight Wrestling Champion.”

TAFT: What exactly am I going to be fighting?

The duo is surrounded by an army of snarling werewolves. A magnificently-choreographed fight sequences ensues, complete with slow motion effects and dramatic music. Taro uses his blade and martial arts training to take down the werewolves, who are kindly attacking him one at a time. Taft uses his wrestling expertise to clothesline, piledrive and gorilla press all werewolves in his path.

For some reason, a large explosion erupts in the background. Lightning dramatically crashes in the distance as Taft German suplexes the final werewolf into Taro’s waiting blade. Both men survey the carnage, absolutely spent.

William Taft is seated at a large round table. Surrounding him are a dozen warriors, men and women, all clutching various weapons.

TAFT: A Great War rages in Europe. Kaiser Wilhelm’s werewolf army looks to be unstoppable. That’s why I’ve called you all here today. You are a collection of the world’s greatest fighters. I’m calling on you to form the world’s most elite fighting squard – the League to Enforce Peace. Together, we will bring Wilhelm and his hell hounds to their knees and bring freedom to the the globe.

A statuesque redhead clutching a mace and wearing a skin-tight leather jumpsuit stands up. She approaches Taft, who looks on curiously.

REDHEAD: It’s a lovely thought, you Big Lub. But I’m afraid it will never work.

TAFT: And why’s that?

REDHEAD: Because Wilhelm’s werewolves got to us first.

Before Taft has a chance to react, another of the soldiers at the table springs up and throws open the blinds, revealing a full moon outside. Before Taft’s stunned eyes, the 12 warriors begin transforming into werewolves. They surround Taft, whose back is literally against the wall.

TAFT: You didn’t really think I’d come here without a back up plan, did you?

Right on cue, Theodore Roosevelt and Katsura Taro burst through the windows in matching leather jumpsuits. Taro has his trusty blade. Roosevelt is armed with an old hunting rifle loaded with silver bullets.

ROOSEVELT: Catch you fuckers at a bad time?

Roosevelt mows the first werewolf down with a shotgun blast. Taft rips off his suit, revealing his wrestling singlet underneath. The three heroes stand grouped together, the werewolf hoard once again surrounding them.

Cue the new Linkin Park cover of “Werewolves in London” as the credits roll. 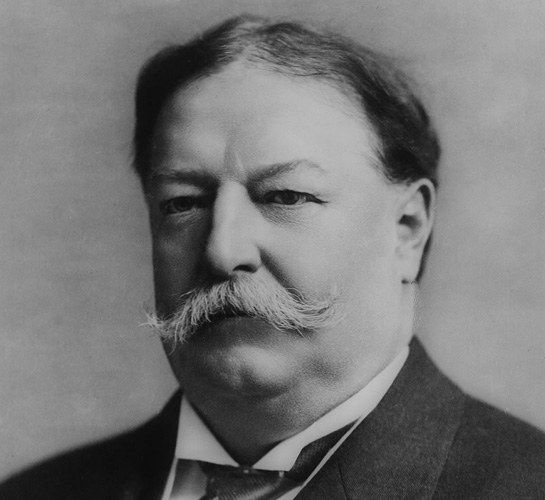