Hail, Caesar! might be a brilliant musing on the power of belief and the importance of following your true passion. Upon careful examination, the events of the movie seem to intentionally mirror the events of the titular film-within-a-film in unexpected and fun ways. It is, however, equally possible that the whole thing is just a silly skewering of classic Hollywood featuring lavish, colorful set pieces.

I’ve spent days thinking about it and honestly I’m still not sure if it is an incredibly deep film or if its just so much fun that I’m reading tea leaves looking for a deeper meaning. All I know is that I can’t stop thinking about it, which is reason enough to recommend you see it for yourself.

The movie, which has been misleadingly marketed as a rescue caper film, is essentially a “day in the life” of Eddie Mannix (Josh Brolin), a Hollywood fixer at Capitol Pictures. Mannix attempts to convert cowboy actor Hobie Doyle (Alden Ehrenreich) into a suave leading man, much to the chagrin of pretentious director Laurence Laurentz (Ralph Fiennes). He also has to help actress DeeAnna Moran (Scarlett Johansson) hide a secret pregnancy. And his biggest star, Baird Whitlock (George Clooney), goes missing from the set of the studio’s prestige picture, Hail, Caesar! All of this takes place while twin gossip reporters (both played by Tilda Swinton) are sniffing around the studio looking for a scoop. 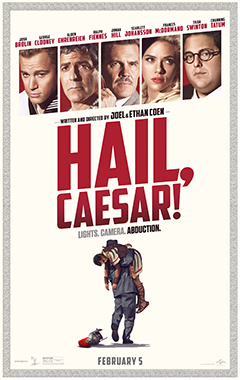 The film opens with Mannix in a catholic confessional. His confession is that he has been sneaking cigarettes behind his wife’s back. As the film progresses, Mannix does countless horrible things in the service of Capitol Pictures. But none of those actions cause him any internal conflict; only lying to his wife does. It was this compartmentalization of guilt that I kept obsessing over after the film as I formulated my theories on what it all means. But even if its ultimately just a fun character trait, it informs Mannix’s character and makes him an enigmatic protagonist.

Unsurprisingly, Clooney does some wonderful scene-chewing as Whitlock. Without revealing too much, I’ll say that is kidnapping turns out to be much more low key and low stakes than the previews imply. Johansson also does a great job playing Moran as a full-formed character with an odd set of morals and life choices. And Swinton, while mostly used for comic relief, managed to make Thora and Thessaly Thacker as two completely unique and complex characters.

But the film’s breakout star is Alden Ehrenreich. Hobie Doyle is a real-life cowboy scooped up by Hollywood because of his boyish good looks and wonderful singing voice. When Mannix decides to reinvent him as a smooth-talking sex symbol, it leads to a predictably-hilarious transitional period. But Ehrenreich makes the character so ridiculously charming that you become invested in him and want him to succeed. I could have spent hours watching him use his spaghetti as a lasso while on a date with his studio-appointed love interest Carlotta Valdez (Veronica Osorio).

Hail, Caesar! also gets maximum use out of Channing Tatum, who plays Burt Gurney. I have mixed emotions overall about Tatum as an actor. I feel like he flounders a bit in action and more dramatic roles. But he’s a tremendous dancer with solid comedic timing, which serves him well as a vaguely-Rock-Hudson-esque actor with an elaborately-choreographed, blatantly-homoerotic dance number with a bar full of sailors. This is easily the most I’ve enjoyed Tatum in a film and the one time I felt like he was the only person who could play the role.

While I continue to go back in forth in my head on what Hail, Caesars! message or driving theme is, I’m mostly just happy that there’s a film out there that can make me think this much. Hail, Caesars! is, in many ways, a love letter to a bygone era of Hollywood film-making. But what I enjoy most about it is that the film itself feels original and complex and quirky, which sadly too feel like bygone traits in what has become an increasingly homogenized cinematic landscape. 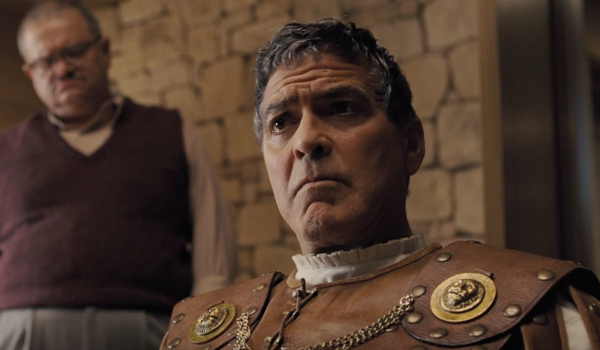