I’m not going to try to add anything new to the whole sordid Sandusky-Paterno-PSU administration affair. What sickens me now is all the accolades being heaped on the PSU players and recruits for choosing to remain with Penn State football, as if what they’re doing amounts to something heroic or sacrificial. Those players will feel barely any impact from all that has transpired in State College over the past nine months, so spare us the laudatory tributes to the fortitude and loyalty of all those poor, poor players.

Let’s start with that handful of players who will get drafted next spring or the year after. They have two options: Stay at PSU, or transfer to another Division I school. Either way, nothing changes in terms of their potential draftability. If pro scouts already have their eye on a kid, he’s hardly going to disappear from their radar by transferring. If he’s playing for Penn State, he’s not going to move to Shippensburg. He can choose the D-I school where he’ll get the most playing time against the highest quality opponents and, come April, he’ll still be putting on some NFL team’s jersey as one of those smarmy owners with disturbingly coiffed hair stands beside his new hunk of grade-A prime, which he’ll own for at least the next five years. No matter which route the PSU football stud chooses, he’s still going to get drafted.

If a kid does choose to transfer, it’s not like he has to uproot a family, sell a house and change his livelihood. He’s just going from one free college ride to another free college ride. He can load up his State College belongings in a U-Haul trailer and be set up in Blackburg or Lincoln or Tuscaloosa by the end of the weekend. How much emotional attachment can he have to a place he’s lived in for all of two to three years? He’s 21 years old, for chrissakes. He’ll adjust to the change and be just fine after ten minutes of crying on the Pennsylvania Turnpike.

But if a kid is one of the vast majority of Nittany Lions whose football career will end after the last game of his senior year, he’s certainly not making any sacrifice by staying at PSU. Sure, the kid signed on to play for the legendary Joe Paterno, but it’s not as if he was playing for the 1984 JoePa. He was playing for a doddering old man who had to coach from the press box and spend increasing amounts of time in hospitals … and grand jury rooms. If he opts to stay, he now gets to be coached by a younger, hungrier and no doubt much more energetic coach fresh from playing a pivotal coaching role on one of the greatest teams in NFL history. I don’t see why a kid who chooses to stay in that cushy situation should get Wounded Warrior-worthy accolades.

He’ll also have a Saturday afternoon home game situation like few others in the country. Over 100,000 people pour into one of the biggest stadiums in the western hemisphere six times per year and scream their fool heads off for him. His away games are played in other rabid, Rockwellian, full-house atmospheres like those in Columbus and Ann Arbor. He gets to walk the Penn State campus with the same swagger he had before the scandal, because not a person with a working frontal lobe blames the players for what happened there. (Of course, that’ll all change bigtime if it ever comes out that the Sandusky crimes were known about but not talked about by the good fellows in blue and white.) They’ll still be lords of the campus who get to bask in the adulation of the football-obsessed PSU student body. They’ll have access to the best food, medical care and alumni cash payments. (Okay, that last one is just a guess, ahem.) If they choose to, they can walk away with a Penn State diploma, something that still has some currency to many personnel departments in the business world. I don’t see how a kid is making a heroic decision by choosing that.

Don’t tell me about how altruistic and selfless they are by willingly staying with a team that will start to lose more games. Trust me on this one: You, the season-ticket holding fan with $500 worth of PSU merchandise in your house, are affected much more acutely by the losses than the players are. Fans see their team lose and they obsess about it for the next seven days. But the average player? Win 13-7 or lose 45-10, he’s going out that Saturday night and having a great time. And that’s as it should be. Sure, he’ll have a harder week of practice, but these guys love practice. That’s part of the whole football experience for a kid, all the time spent with the team in the weight room, the film room, the locker room, the dining hall. Of course a kid would much rather finish a season 11-1 and play on New Year’s Day, but he’s still going to have a rich, rewarding and unforgettable football experience at Penn State even if his teams wins only four to six games per year.

Finally, about bowl game ban. Okay, the bowl game experience is something that a players is losing out on through no fault of his own, but that hardly qualifies as a tragedy or a grave injustice. I’d file it under a more appropriate heading, something along the lines of: Bummer.

Big deal if a PSU player won’t get his week in Tampa or Miami for the next four years. It’s not as if the kids get a spring break-style vacation during bowl week. Every minute of every day is structured for them, so they’re not exactly out on the beach chasing Miami Beach tail all week. If a bowl game is that important to a player, then he has the right to transfer to any of the other 114 D-I schools who play in bowl games, or so it seems. Go ahead and give up the PSU experience and transfer to the University of Maryland all for a December week in Mobile or Nashville or Shreveport or wherever else the rest of those unwatched garbage bowls are played. The schools oversell the whole bowl game experience to players anyway. Those games aren’t to reward the kids. They exist only to add more money to the fat football coffers at D-I schools.

So let’s all just scale back the tearful odes to the poor, put-upon young men of Happy Valley and how they are sacrificing and doing something noble by remaining a Nittany Lion. Regardless of what they choose, their college experience will allow them a better four years than most of us had between the ages of 18-22, whether you went to college or not.

And for any PSU fan who has bemoaned the unfairness of these players paying for the sins of others, you are granted the right to act sympathetic only if you held the exact same sentiment for the Ohio State and USC players who ended up in the same situation. But if you didn’t care a whit for them when their sanctions were handed down, then your deep, abiding concern for those poor, poor PSU fellows is disingenuous bullshit. The only person you truly feel sorry for is yourself and the lower quality PSU football you’re going to see for a while, but you don’t dare admit that, what with a passel of molested kids out there suffering in the wake of all this. 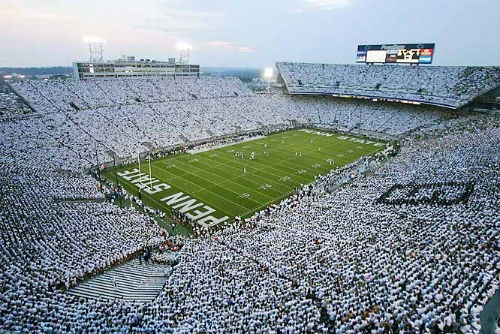