I’m flipping between four different games on college football’s biggest weekend, and instead of basking in the intensity of some of sport’s most intense rivalries, I’m sad.

No, I’m not sad because the Biting Irish are ranked number one. I know that will last only until some SEC team gives Touchdown Jesus a good, swift redneck kick in the balls in the National Championship Game.

I’m sad because I’m reminded that my favorite aspect of college sports is going to end in 2014. That’s the year when the four-team college football playoff format goes into effect, thereby ending what I love most about college football: all the pissing and moaning about the season-ending rankings by too-old-to-care-this-much assbags who take their college football way too seriously.

Nothing in sports gives me more pleasure – or boosts my self-esteem more – than listening to grown ass adults scream about the epic unfairness of a ranking system that keeps their favorite college football team from its rightful place in the rankings.

I’m not talking about the actual students. Their tears and torment make a little sense, as they, you know, still attend the college and see the athletes are their classmates. (Yeah, I could hardly write that line without laughing, too, but I have no problem with bigtime college athletes not being actual students. But that’s another column.)

I take an obscene pleasure in listening to adult males wax apoplectic about the unfairness of the BCS ranking system. Veins pop. Neck muscles strain. Hands and arms gesticulate like a constipated Mussolini. All over the fact that their beloved group of 18-22 year olds won’t get a chance to be ranked number one at the end of another college football season.

The upcoming playoff system, set to start in 2014, takes away so much of this annual December rage-a-thon that is in effect that only thing that makes me enjoy college sports. With an actual four-team tournament, I’ll no longer be treated to vitriol-filled accusations concerning Dealey Plaza-level conspiracy theories concocted by a nefarious BCS that just won’t allow Tulsa or Oregon or Boise St. or one of those Texas universities not called the University of Texas to play for all the marbles, as some soul-crushingly unoriginal network announcer (I’m lookin’ at you, Brent) will undoubtedly call the title game.

Once the playoff format starts, I won’t get to savor an entire off-season of listening to still simmering and eternally resentful fans talk about how the BCS kept their boys out of their deserved number one ranking because the damn networks needed Ohio State for the ratings. West Virginia fans will have to settle for another easy Florida-based bowl win against some other 6-6 mass of mediocrity instead of making their case for why their 7-5 ‘Eers were really the best team in the whole damn land again this year.

All those redneck fans of schools not in the SEC will no longer be able to rant and rail about how their good ol’ boys can play as good as them boys from Ala-goddamn-bama, because Alabama (or LSU … or Auburn … or …) will have won out in the playoff format these foaming-at-the-mouth fans have clamored for forever.

That’s why I was so upset that USC lost to Notre Dame this weekend. (Okay, a lifelong hatred of Notre Dame was the main reason I was upset.) Had USC won, then the fans of about five other one-loss schools could have entertained me for six weeks with ineloquent, spittle-laced diatribes about the gross unfairness of their team not getting the nod to play for “all the marbles” on January 7. Then they’d carp all spring and summer about it, and this would make me immensely happy.

But those days are coming to an end. You think your team is hot shit and should be number one? Then they should have won their first-round playoff game. They lost in the championship game? Guess that makes you a rightful number two, as you just went through the playoff system you hollered for for years.

So if rabid, grownup college football fans are high on your hate list as they are mine, savor this last year or two of bitching, because in the future, the national champion will have earned their place by besting two of the other top teams in the land, and all these bozos I love to hate will no longer have the BCS to kick around.

Instead, they’ll have to adopt a saner, more adult, more mature outlook on the situation and take a tack that we more enlightened sports fans follow: they can blame the refs. 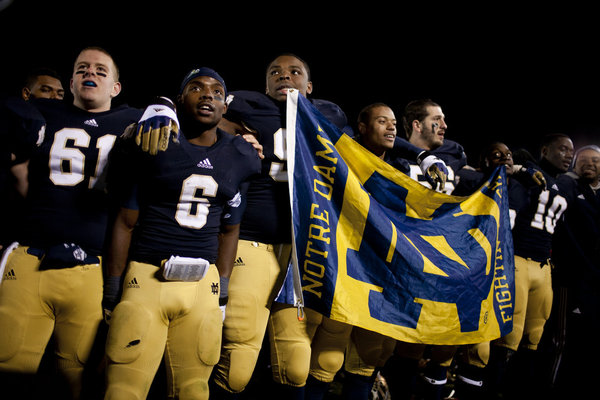