Of all the villains that Stetson-sporting U.S. Marshal Raylan Givens has squared off against on Justified, none have been as fascinating, brilliant or unnerving as Mags Bennett. Margo Martindale came into the show in season two and, like a true force of nature, completely dominated the series, eventually earning an Emmy for the role.

She has a new film out today on DVD and Blu-ray called Scalene, so we took the opportunity to sit down with Martindale to discuss her award-winning role, her experience working with Clint Eastwood and life after Justified. It’s a chat as pleasant as one of Mags’ Apple Pies.

How did you get into acting? When did you decide it’s what you wanted to do for a living?

In high school – doing the musical in my small town in Texas. Looking back on it, I had probably been acting since all of the play games in the backyard when I was a child. But knowing it’s what I wanted to do, I was 16 years old.

Did you go to college for acting?

I did. My aptitude was for the sciences – math and biology and all that. But my talent was in, I guess, acting. I got a scholarship to a small college in my hometown, which specialized in acting, though it was a little Methodist school called Lon Morris college. From there I got about 23 scholarships to universities. Lon Morris is a two-year school. I went to the University of Michigan on a full two-year scholarship.

Did you pursue a career in acting right out of college?

I think I had my first paying job in Michigan. Then I went to Harvard and had a paying job doing the A.R.T. theatre there at Harvard. After Harvard, I moved to New York. And then it was a rocky road through the 70s. I think in 1979 it kicked in for me. Jim McLure wrote a play for me called Laundry and Bourbon. All theatre.

I finally, in 1987, did a play that was an extremely huge hit. Though I’d done some other hit plays before that, but not like this one. And people in Hollywood came. It was Steel Magnolias. I was still working during the day as something else and doing the play at night until we moved from the small theater we were in to another theater. Then it was off and running and an enormous hit for three years.

Before that, off and on, I could stop doing other jobs, but 1987 was the first time I actually stopped completely having to – my husband supported me much of the time – do an extra job to pay the rent.

How did Million Dollar Baby come about and how did that change your career?

I was doing a show on Broadway – Cat on a Hot Tin Roof – and had just been nominated for a Tony. During that summer after Cat, 2004, I auditioned for Million Dollar Baby. I had auditioned for Clint [Eastwood] many times. He’d always been interested in me. He had offered me a part in something else, which I turned down and thought, “That’s the end of me with Clint Eastwood.” It was a tiny part and it was something I didn’t want to do.

I did the entire part for him. You don’t meet him, you just do it on tape. He told me unanimously everyone in the group said, “That’s it.” When I got there to do it, he said, “Just do what you did.”

That has to feel great, especially coming from someone like Clint Eastwood.

It was very freeing. He’s pretty laid back and fantastic.

After that, you went on to play Mags Bennett on Justified. How did that role come about?

I was out for a premiere of Secretariat, the Disney movie I did, which was fabulous. My agent said, “Do you want to go audition for this Kentucky …”

And he said, “They want to hear you say the words.”

So I went and read it and said, “This is fabulous. It’s an incredibly part. I’ll go wherever I have to go to audition for it.” I did and I went on tape in a casting director’s office and in an hour they called and said, “You got it.” It was fast.

I was only contracted to do, I think, four episodes and then I got the whole season after they saw the first one. It was great. It was a wonderful, fabulous, fantastic part.

Did they give you any indication that they had plans for the character for the whole season or was it really just like, “We’ll hire you for four episodes and see how it goes”?

No, it was just I was hired for four episodes. And I think before Christmas they told me I was doing the whole season. I knew about a month in that it was the whole deal. Did I know I was going to be killed? No.

What is that like? When did you find out that you were going to be killed off?

Graham [Yost] had called most people when they were being killed off. He would call them and tell them. And I got the script and I sat down next to Tim [Olyphant] and he said, “How are you?”

He said, “Graham didn’t call you?”

And Graham, of course, it’s a huge joke between us. He said, “I’m so sorry I forgot to call and tell you.”

I think that they were really contemplating could we not kill me. But you know, they really had to kill me. Or I had to kill myself.

As an actor when you read it, can you just appreciate the story and understands why it needs to happen or is there a part of you that goes, “No, but I could live”?

I can tell you that when I read it, I thought it was the absolute perfect ending for that character and that show. She was too much, too big – the dramatic arc of that character had nowhere to go but out like that.

But when I started to shoot it, I broke down sobbing and crying. It was so emotional. I had no idea. It came out of the blue to me. I said, “You have to give me some time here. I’m so sorry.”

Was it just you and Timothy Olyphant on set at that moment?

It was almost everybody. Then the director said, “Get everybody out. Give Margo some space.”

But it surprised me.

Did you keep up with the show during season three?

I watched the first two or three episodes. Then it kind of got too hard. It’s such a fabulous show and everybody on there is so incredible, but I guess it was a little painful for me. Isn’t that terrible? It’s so small of me.

As you mentioned, Mags was such a force of nature on the show. What was it like as an actor who had been in the business for a long time to land a role like that and to prepare for it?

Honestly, there was no preparation. It was the easiest thing I’ve ever done. It was as if I was flying. It was so easy for me to find and so liberating.

Did you feel like this was a character you had been waiting for?

Yes, absolutely. I did a play once in the 90s called The Sugar Bean Sisters and my role model in my head was Robert Mitchum. So it was almost sort of like that because Mags Bennett is really smart. I think there had been some things brewing for me for that kind of character to come along.

What is it like on Emmy night when you’re sitting there and your name gets called out?

Did it go by really quickly?

When and how did your role in Scalene come along?

I did Scalene the spring before the fall of Justified. Scalene, that had a complicated character in it. I’m very drawn to complex and complicated. I was drawn to the mystery, the psycho bit of that. I thought [writer/director Zack Parker] had a really great style.

You can never know exactly how something is going to turn out. But I would say that the first five minutes of that movie are pretty fantastic. I think the whole thing is really great, but stylistically fabulous.

You mentioned turning down a Clint Eastwood role. How do you decide what parts you want to do and what ones you don’t?

Well that was Mystic River and it was “Woman at Door.” That’s what I didn’t want to do. Or “Neighbor Woman.”

I want there to be enough depth to play. I need some play room in a character. Because otherwise, if I have to button myself down, it’s not so fun and so fun to watch. But if there’s play room, it’s fun to do and fun to watch.

When you say play, are you someone who prepares meticulously going into a role and then plays around when you are on set? What is your process like?

What does the future hold for you?

Well, I have a wonderful thing brewing right now and I’m very exciting about it. The negotiating is not nailed down, but it’s a movie for the fall that I’m really thrilled about.

And I’m hoping there’s a new television series somewhere lurking out there. Actually Graham wrote to me [on my] birthday and wished me a happy birthday. And I said, “Need to say your words. New show?” 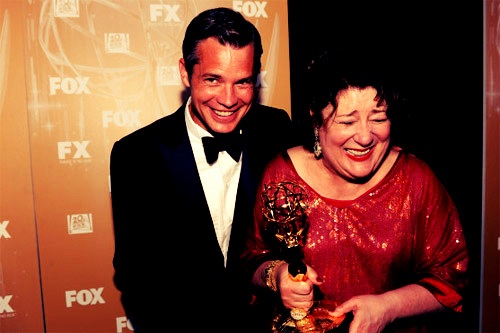 on Blu-ray and DVD.