If there was an Academy Award for subtlety, 42 wouldn’t have a chance of winning it.

It is not a film that is interested in complexity or shades of gray. You will never once wonder who is good and who is bad or wonder how you should feel in a given scene. Every emotional beat is telegraphed from a mile away. Every scene is carefully calculated and meticulously written to evoke a specific feeling in the audience.

The film, which tells the story of Jackie Robinson’s tumultuous rookie season as the first African American player in professional baseball, hits every cliché you would expect. There are the racist teammates who refuse to play with a black man. Then there are the initially skeptical racists teammates who eventually have a change of heart. There’s a horribly racist manager intent on getting Robinson to fight him so he’ll be kicked out of the league. There’s a precocious black child who will grow up to be a baseball player himself and a precocious white child who comes to the game with innocence, but is taught to hate by his racist father. And there is, of course, the benevolent white owner who brings Robinson onto the Brooklyn Dodgers and offers him sage advise along his journey.

The film has no desire to be a deep, thinking man’s film. It’s not a postmodern examination of Jackie Robinson’s life. Instead, it is a feel good throwback to a bygone era of filmmaking. (It even has a sepia hue to visually evoke a classic era of films.) It is deliberately shallow and obvious. And it absolutely works.

It works because the story it is telling is a compelling one. And it has a handful of jokes, emotionally-powerful scenes and colorful moments that audiences will love. But it works most of all thanks to strong performances by its two lead actors – Chadwick Boseman and Harrison Ford.

Boseman plays Jackie Robinson and he plays him brilliantly. Boseman’s presents Robinson as a charming, thoughtful guy who simply refuses to accept the status quo. But, most importantly, he gives a nuanced performance that hints at the emotional turmoil bubbling just under the surface in Robinson. He was a man forced to keep his emotions in check as he was constantly tested by men looking to rile him up so that he’d fight them (or otherwise slip up) and get kicked out of the league. Even as he’s presented as a quiet man who is careful with his words, Boseman’s Robinson is a rich, sympathetic character that you quickly feel attached to. 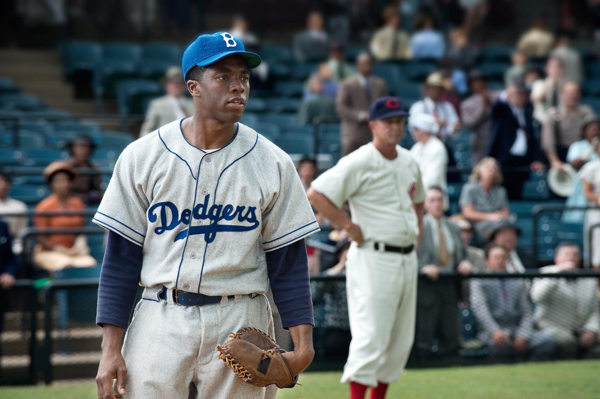 And while most of Boseman’s performance involves hinting at emotions just under the surface, the one moment when he finally snaps and lets it all come crashing out is a thing of beauty. After being relentlessly heckled by manager hurling racial epitaphs at him left and right, Robinson heads back to the locker room area – where he is alone and free to express himself openly – and lets out a primal scream while smashing his bat against the wall; finally venting all of the anger he’s been forced to hide. It’s an incredibly powerful emotional scene that Boseman absolutely sells.

Ford’s performance doesn’t have the same subtlety and restraint that Boseman’s does. But as Brach Rickey, the Dodgers owner who brings Robinson into the league, Ford delightfully chews the scenery and turns in a wonderfully amusing, broad performance. As played by Ford, Rickey is a boisterous, larger-than-life man who sounds like he gargles with rocks every morning. Somehow it works.

There are also a handful of really enjoyable cameos in the film. Christopher Meloni is fantastic as the Dodger’s unflappable manager Leo Durocher. John C. McGinley shines as stadium announcer Red Barber. And the normally charming and funny Alan Tudyk instantly makes you detest him as the racist opposing manager Ben Chapman.

42 knows exactly what kind of film it is and what beats it needs to hit to succeed. It isn’t a terribly sophisticated film or a terribly deep one, but it is a film that confidently tells the story it sets out to. It may not blow you away with its subtlety, but it will leave you solidly entertained. 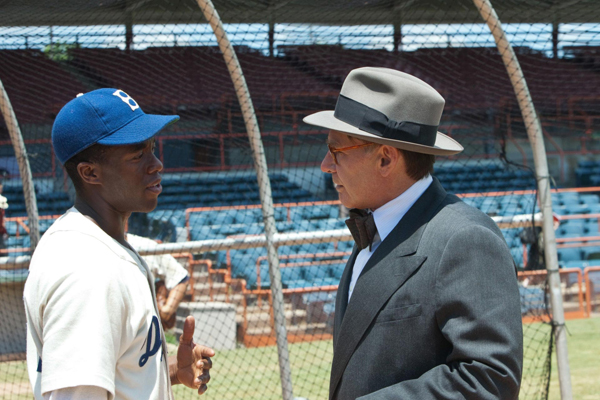