There was much discussion of the reported $50 million Robert Downey, Jr. was paid for his role in The Avengers. That’s a staggering amount of money to pay an actor, regardless of how talented he is. But after seeing Iron Man 3, I can officially tell you … he’s worth every penny.

There were a variety of factors that went into the success of Marvel’s various Avengers movies. But the entire franchise was launched on the strength of the original 2008 Iron Man film. And that film was a joy to watch in large part because of Downey, Jr.’s charismatic portrayal of Tony Stark.

I bring this all up because it’s Downey, Jr.’s charisma that carries Iron Man 3. It’s a film with a bizarre and slightly convoluted plot that never comes close to reaching the heights of the original Iron Man or of The Avengers. But Downey, Jr. is such a joy to watch in the role that I was willing to forgive many of the film’s flaws and simply enjoy it for what it is.

At the beginning of the film, we discover that Tony Stark is still reeling from the events of The Avengers. The once cocky superhero is now filled with doubt and suffering from panic attacks. He came close to death while facing an enemy from another world. He’s having trouble shaking it all off and returning to his “regular” life.

A new villain surfaces – The Mandarin (Ben Kingsley), a flashy terrorist who hacks into television feeds to give long, poetic speeches after he bombs his targets. It’s difficult to pin down where he will strike at any given times, since his attacks seem to happen at random.

Meanwhile, an entrepreneur named Aldrich Killian (Guy Pearce) and a researcher named Maya Hansen (Rebecca Hall) hope to convince Stark Industries to invest in their cutting edge new research, which allows humans to regrow missing limbs. But all is not quite what it seems with their project.

The plot is full of twists and turns, some of which work better than others. At times, it seems like Black is misdirecting the audience just for the fun of it and his overuse of bait-and-switch tactics starts to wear thin after a while. However, I really enjoyed the surprise development about The Mandarin, a role which Kingsley is fantastic in.

There are a few moments that seem ridiculous even by comic book movie standards. For example, we learn at the beginning of the film that Stark is up to Iron Man Mark 42 – an experimental and yet-untested new suit. After an attack on Stark’s home, all of the other suits are buried in the rubble and he’s left with only Mark 42. Then that suit malfunctions and he’s left costume-less. So apparently we are supposed to believe that a genius crimefighter with 42 different Iron Man suits didn’t think to leave a couple of them somewhere besides his palatial and easily-targetable home. In Iron Man 2 he had a suit he carried around in a briefcase, but apparently he didn’t think to store that one at the office or in the car or anything.

Still, in spite of a few clunky plot developments, the film is still quite enjoyable. In addition to Downey, Jr.’s fantastic performance, there are also many great comedic moments in the film and some truly enjoyable action sequences.

The best action sequence involves a number of innocent bystanders getting sucked out the side of a damaged airplane. Iron Man must figure out a way to save all 12 of them as they are quickly plummeting to their doom. The scene is shot and executed beautifully and the solution Stark comes up with is a very clever and fun one.

Ultimately, Iron Man 3 is weakest installment in the Iron Man franchise. But it’s still a fairly entertaining film that works thanks to another strong performance by Downey, Jr., a handful of great action sequences and some really funny scenes. If you have enjoyed the previous films, chances are you’ll at least be moderately entertained by this one. 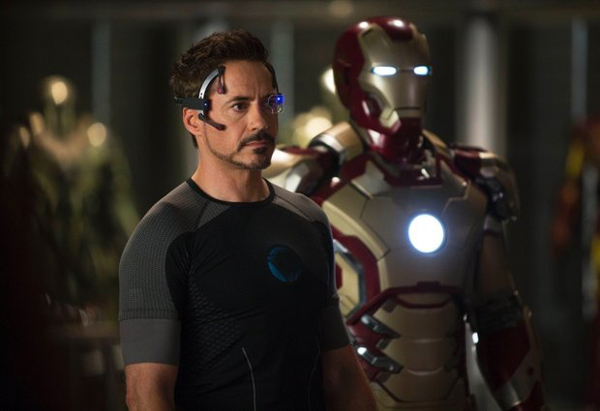