It’s that time of year when the stores start playing Christmas music, TV shows take a break, Illinois gets destructive tornadoes and snow in the same week and stores close for a few hours in the morning to gear up for the night’s corporate-mandated insane re-enactment of The Hunger Games. Yes, it’s Thanksgiving again, but don’t worry if you forgot and commercials lulled you into thinking it was already Christmas four weeks ago – it’s just modern life!

But before Thanksgiving Day rolls up and my apathy kicks in completely, it’s also that time of year when I give thanks for all that 2013 has begrudgingly given me.

I’m thankful that this year I’m not going to make another cynical joke about not spending time with my family. I mean, I’m still not going to, but isn’t this annual header a little bit played out? It’s starting to get sad, dude. They get it, you’re a shut in.

I’m thankful for my parents, who are getting conservative as they near their sixties. One gets more and more openly racist, the other is clinging more and more to guns, and they are providing me with excellent examples of how not to age gracefully. Important reminder as I go through life: don’t be like them.

I’m thankful to my best friend Carl for getting me that copy of 50 Shades of Grey, for now I truly know what hell is.

I’m thankful to the two other people I know who didn’t like “The Day of the Doctor,” Steven Moffat’s epic 50 year-celebration of the last couple of seasons of the show. You make me feel slightly less alone in my cynicism.

Thanks to Brian Jay Jones, who wrote the great Jim Henson biography that we’ve been hoping to read for the last 25 years.

I’m thankful for Idris Elba, because damn. I mean … damn.

I’m grateful to DC Comics for publishing the fantastic web series Batman ’66 and Batman: Li’l Gotham, currently the only two series DC actually publishes where any fun is allowed. Someone needs to surgically remove that stick of gritty edge from the rectum of that company. And bring back Plastic Man already!

Thanks to Robin Thicke for making casual good-time misogyny look as ridiculous as it actually is. Yes, you dope, a song about blurring the lines of consent is totally about feminism. At least that song had a decent beat. Oh, wait? That was ripped off from Marvin Gaye all along? In that case, I’m thankful to Marvin Gaye for writing music so great it’s still being stolen by sexist hacks. Everyone, listen to some Marvin Gaye this Thanksgiving. It’s good for your soul.

I’m thankful that this twee, joyless mess is the final season of How I Met Your Mother and I won’t have to watch it anymore.

I’m thankful for John Boehner for voting for the fourth year in a row to reduce funding to embassy security, even as he tries to blame the President for the lack of security in Benghazi, for pretending to be totally unaware of the IT problems with the ACA website even though Kathleen Sibelius testified to Congress seven months ago that they needed more money to smooth it out and make it run better, and for being a whiny baby and shutting down the government when he couldn’t defund a law that was already passed by Congress, signed by the President and upheld by the Supreme Court, because it was very important that low level government employees take the hit for his inability to understand how government works. Oh, and for whining about how wrong it was that national parks were shut down during the government shutdown, because he apparently doesn’t know how a shutdown works, either. Anyway, I’m grateful to him for showing America just why they shouldn’t vote for Republicans ever again. It’s not that they’re evil. It’s that they’re unbelievably stupid.

I’m thankful for NASA’s Chris Hadfield. That dude was the most inspiring person of the year! The amazing videos he made from the International Space Station were not only informative, personable and incredibly enjoyable, but they were reasons to hope when it was too easy to look around and despair over the direction we’re not going in.

I’m grateful for state-subsidized mental health care, because I’m finally getting the help I need. It’s important to feel supported and secure, and I still really, really don’t, but I feel like I have more access to help than I have in a very long time. That’s tremendous.

And I’m grateful for my very patient and lovely wife, my pet rabbit (even on days when she’s ripping up the carpet), my littlest sister who is now in her freshman year of college, my other sister who is about to give birth to my first niece or nephew, household chores for giving me more time away from the computer and baking for giving me a new sense of confidence.

I hope all of you have a safe and happy day, Thanksgiving or no, America and every other part of the globe. Stay warm, maintain, and really think about the fact that in order to shop on Thanksgiving Day, you have to make someone work rather than, say, taking the day off to be with their family. And if you’re going to be a dick about it, well, may the odds of taking a cleat to the face from some other schmoe-dinks scrambling for the cheapest laptop charger be ever in your favor. 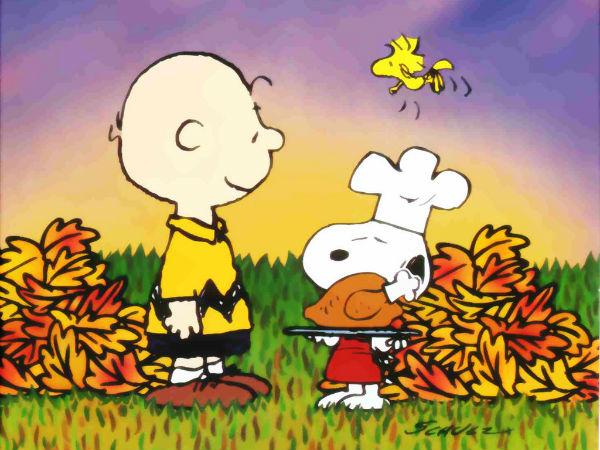