Malaysian Flight 370. A passenger flight that went missing over ten days ago. We have 26 countries who have joined the effort to locate any possible wreckage, with no luck as of yet. The flight had 12 crew members and almost 300 passengers from 15 different countries. Diverse, right? Like, almost as if they were chosen by a casting director?

There was a report that there had been communication with the Rolls-Royce monitoring center (the manufacturer of the engine) for five hours … from a flight that had lost communication after only one hour. Implying that it was in the air for five whole hours. Though that fact has been denied. Perhaps a wealthy executive from Rolls-Royce, a Charles-Widmore type if you will, had his hand in this debacle. Someone should keep an eye on any of the employees that own their own freighters or anyone that has recently purchased a spare Boeing 777-200ER fuselage.

The plane’s pilot, Zaharie Ahmad Shah, has been a pilot with Malaysia Airlines for 23 years. The first officer, Fariq Abdul Hamid, for almost 8 years. Coincidence? 4 8 15 16 23 42.

Two of the passengers have reported their passports stolen … and weren’t actually on the plane. This could be suspicious or it could just be a sign that this sort of crime happens all the time. It’s hard to say. What is clear is that it’s a case of two criminals aboard this plane who have used false identities. Maybe … just maybe … they are going by the names of Sawyer, or James Ford, or Jim LaFleur and Kate Austen, or Monica whatever-her-name-was. Maybe they are on the run because of deep-seeded family issues that lead them to a relatable and lovable life of crime.

I’ll stop there, though I’m sure I could keep going. I mean, I’m not blaming J.J. Abrams for the disappearance of this plane or anything … I just think it’s playing out as awfully coincidental.

I just hope that the passengers of Malaysia Flight 370 don’t encounter a vicious smoke monster security system on whatever island they have landed on. Or that there isn’t a couple of feuding brothers making a mess of things in biblical proportions. I DO hope that there are awkwardly laid out Star Trek references and hot cage sex.

Too soon? Don’t you dare. It’s been almost four years since we lost that show.

If you’re feeling nostalgic in the light of recent news, feel free to pop in a DVD (preferably season two … and stop midway through season three) and whip up a batch of these Dharma Initiative cookies.

Combine chocolate wafer ingredients in a bowl until well mixed.  You may need to get your hands in there!

On a surface lightly dusted with flour, shape dough into two logs, about 1 1/2 inches (or about 4 cm) in diameter.

Wrap in plastic wrap, waxed paper or parchment and freeze for at least 1-2 hours, until dough is very firm and can be sliced into wafers.

Slice dough into rounds not more than 1/4 inch thick – if they are too thick, they will not be as crisp – and place on a parchment lined baking sheet.

These cookies are firm and will not spread very much, so you can put them quite close together.

Bake for 13-15 minutes, until cookies are firm at the edges. Cool cookies completely on a wire rack before dipping in chocolate.

Combine chocolate chips with peppermint extract and shortening in a large microwave-safe glass or ceramic bowl.

Heat on 50 percent power for 2 minutes, stir gently, then heat for an additional minute.

Stir once again, and if chocolate is not a smooth consistency, continue to nuke in 30-second intervals until smooth.

Use a fork to dip each wafer in the chocolate.

Tap the fork on the edge of the bowl so that the excess chocolate runs off, and then place the cookies side-by-side on a wax paper-lined baking sheet.

Drop from an airplane.

In a stand mixer, cream the butter, then slowly add the remaining ingredients until mixture sticks together when pressed into a ball.

Roll the dough until 1/4″ thick.  Cut out with a small cookie cutter.

Transfer to a baking sheet and bake in an oven preheated to 375 degrees for 11-14 minutes, or just until the cookies have set.

Serve with a sprinkling of lemon zest and sparkling sugar, if desired.

Keep away from Hurley.

* The seed of this column was the brainchild of Whitney, a fellow Philadelphia lady nerd! Thanks, Whit! 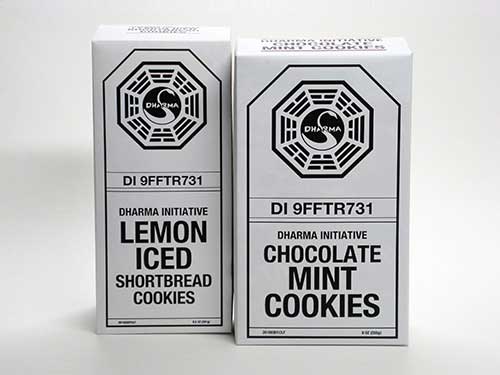