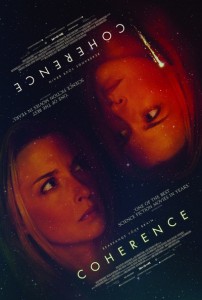 Recently, HoboTrashcan’s editor-in-chief Joel Murphy saw the indie movie Coherence and he was blown away by it. So much so that he wanted to give all of you a chance to see it.

Through a crowdfunding site called Gathr, which works like Kickstarter to bring independent movies to local theaters, the Landmark Harbor East in Baltimore has offered to screen the film if we can presell 93 tickets.

We have until Oct. 13 to sell the tickets. If the funding goal is reached, the screening will take place Oct. 23 at the Landmark Harbor East at 7:30 pm. Tickets are just $12.50 and must be purchased before Oct. 13 to make this happen.

If you are unfamiliar with Coherence, here’s the official synopsis:

On the night of an astronomical anomaly, eight friends at a dinner party experience a troubling chain of reality bending events. Part cerebral sci-fi and part relationship drama, Coherence is a tightly focused, intimately shot film that quickly ratchets up with tension and mystery.

You can see the official trailer here:

To buy tickets, follow this link to the official Gathr site:
http://gathr.us/screening/8802