[Editor’s Note – The following article contains many, many spoilers for Jurassic World, so proceed with caution.]

A InGen Security officer stand inside the Jurassic World control room watching the monitors as the climactic battle unfolds. Just as things settle down and he sees the Indominus Rex killed and Claire Dearing, Owen Grady and Claire’s nephews finally getting to safety, his senior officer walks into the control room.

All business, the senior officer walks right up to him and demands a status report.

“We did it, sir! The Indominus Rex has been killed! The island is safe!”

“Well, yes. Claire Dearing let it free in order to take down the Indominus.”

“Jesus, Simmons. So the T. rex is roaming free in the park? We’ve got to stop it before it hurts someone else.”

“I think it’ll be fine, sir. The T. rex seemed to enter into an alliance with Ms. Dearing and the raptors in order to take down the new predator.”

“The raptors? They are free too? Good lord.”

“They’ll be fine, sir. Owen Grady shared a meaningful glance with one of the raptors before it scurried off into the woods.”

“A meaningful glance? Is that what you are going to tell Hoskins when he gets here?”

“By the raptors? This is what I’m talking about! They are a menace.”

“Yeah, but, sir … they didn’t agree with Hoskins ideologically. They decided to team up with Grady. They are on his side. The side of justice.”

“Simmons, are you fucking high? These are killing machines! They aren’t making moral judgements. They are oversized lizards looking for their next meal. We need to round them up immediately.”

“So that we can get them ready to deploy in war situations?”

“War situations? Jesus, Simmons, you want to send these predators into a war zone? I think our soldiers have enough to worry about with having to fight a pack of hungry, confused dinosaurs they’ve been holding in cages for hours that had trouble telling the difference between them and the enemy?”

“And how did that work out for Hoskins?”

Just then the two officers watch as a flock of Pteranodons dive bomb the park’s entrance, looking for scraps.

“And what about them, Simmons? Did any humans enter into an alliance with them?”

“No, sir. They’ve actually been wreaking havoc everywhere. They even attacked Ms. Dearing’s personal assistant, which seemed … gratuitous. It’s not like she was a snarky lawyer taunting kids or anything. She was just a sweet, underpaid assistant who got stuck watching Ms. Dearing’s whiny little nephews. She never harmed anyone.”

“That’s what I’ve been trying to say, Simmons. You’ve anthropomorphized these creatures, but they don’t operate with the same moral compass you do. They don’t share meaningful glances with humans or enter into alliances with the T. rex. That would be ridiculous. They are ferocious animals with tiny brains acting on instinct that take down threats and hunt for food.”

“I’ll tell you exactly what we’re going to do. We are going to get everyone off of this island. Then we are going to firebomb it until every last dinosaur is dead. And when that’s done, we are going to polish our resumes and find a nice, quiet security details in sleepy towns where there is no crime.”

“We can’t do that, sir. This franchise is too valuable. It’s a gold mine. No matter what happens, however implausible, we must find a way to plug along. Even after the original Jurassic Park ended in disaster and these creatures got to the mainland, we inexplicably went ahead with opening Jurassic World. And it made a fortune. People came, even though it made no sense. We are fated to do this forever, no matter what unfolds here.”

The senior officer lets that set in for a minute. He’s crestfallen. Silently, he starts heading for the exit.

“Where are you going, sir?”

“I’m going to head outside and wait for one of the raptors to eat me.” 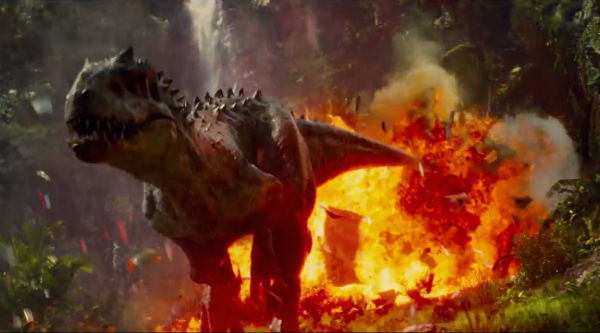