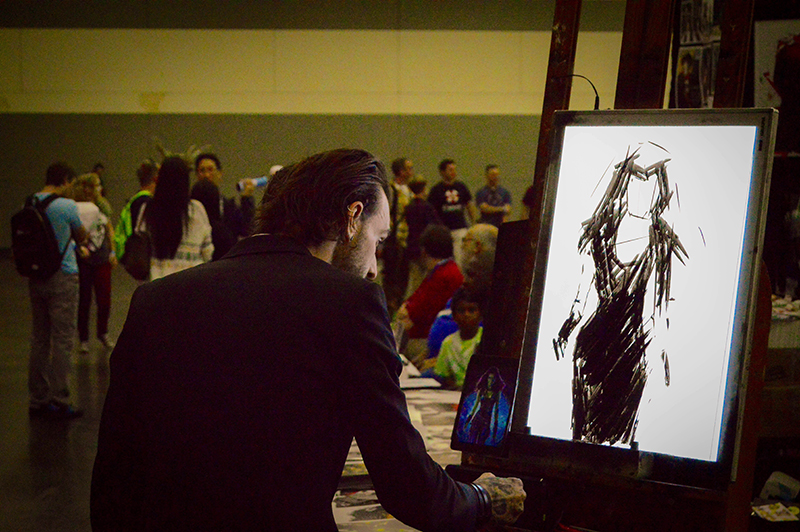 Putting comics first and allowing fans easy access to the creators they love has been a proven recipe for success for the Baltimore Comic-Con. Fans and creators alike love coming to the convention because it puts the comics first.

Last year saw the annual convention move into a large space at the Baltimore Convention Center and saw the con expand from two days to three. This year, at the 16th Baltimore Comic-Con, which took place September 25-27, things continued to get bigger and better.

While Baltimore is still much more comic-centric than the infamous convention in San Diego, the last few years have seen an influx of celebrity guests. While previous conventions have hosted celebrities like Kevin Smith, Peter Mayhew and Jerry “The King” Lawler, this year had a bigger emphasis on big names, which included Edward James Olmos, Katie Cassidy and Paul Blackthorne of Arrow and WWE Diva Melina Perez.

In years past, the celebrity guests were still just seated at tables that fans could easily approach. But this year, Olmos and Co. were sectioned off in one remote corner of the convention center. Fans had to wait in long, roped off lines to get autographs or go to a special curtained off area and pay around $50 to have a portrait taken with their chosen celebrity.

It was a bit jarring to see this new celebrity corner. In some ways, it took away from the quaintness and charm of the event. (Though, in fairness, these celebrity photo and autograph sections have become commonplace at most conventions. It just still feels odd to see the practice make its way to Baltimore.)

But while the celebrity section was distracting, it still felt very separate from the rest of the convention, which, like always, allowed fans easy access to the creators they love. While it wasn’t easy to approach Edward James Olmos, fans could still walk up to Neal Adams or Frank Cho or Scott Snyder to have a personal conversation.

Hopefully, Baltimore can find a way to keep this personal touch intact as the convention continues to expand, since it is what makes the Baltimore Comic-Con so special.

Photos and article by Joel Murphy. Check back tomorrow for an interview with comic book writer Greg Pak.