It’s that time of year again where all the nerds step from their dark doorways, blinking into the bright summer sun, donning their bestest cosplay gear and nicest camera equipment, thrusting themselves into the sweaty world of comics, film and television with other like-minded individuals and the actors/writers/illustrators that turned them into the fanboys and fangirls that they are.

San Diego Comic-Con. The biggest con this country has to offer. So big … that it is being infiltrated by non-nerds. The offerings of the SD Comic-Con are getting so expansive that for years, it has become bigger and bigger, bringing in a wider audience and blending our lovely little segregated community into a conglomeration of nerd-diversity.

Nerds all over the country are getting their panties in a bunch over the purity of geekdom and Comic-Con is a huge catalyst for a lot of these rants. I’d like to take the opportunity to have my own little rant.

You. Hey you. Guy with the Death Star tattoo, Kitty Pryde graphic tee, Lord of the Rings replica ring on a chain around your neck and the TWO “You Can’t Take the Sky from Me” buttons on your ratty-ass messenger bag. Yeah, you. Chill the fuck out.

I get it, Comic-Con is crowded now and it blows balls. Cons all over the country are crowded now. Nerd culture has come forth into the light and is much more mainstream than it ever was before. But instead of complaining about, instead of being this Hipster of Nerds, how about you embrace it? Does that bro over there in the corner cosplaying as Angel have a crush on Sarah Michelle Gellar? Does that quiet girl really love the Hobbit, but has no idea who the fourth Doctor was? Who the fuck cares?

Guess what. These cons have been bringing in SO MUCH revenue that they’ve been able to grow in not only size, but also reputation. This brings in bigger names. So, while Angel over there would rather play Call of Duty than Skyrim, the money he brings in is helping pay for the entire Arrow cast to come and do a panel right in front of your faces. Yeah, you have to be in the same room as the guy who probably farted on your doppleganger’s face in high school. But think of all the good that is coming from it.

If the fanboy’s intentions are pure, albeit shallow, leave him alone. Embrace the diversity. Dont be a dick. You can even go home content in knowing that you could out-trivia him on anything sci-fi and fantasy related. Or feel comforted by knowing you’d have more to say to Leonard Nimoy if you both bumped into him. He might not even recognize Nimoy. (Though he’d probably recognize Zachary Quinto … seriously, I’m not trying to egg you on.)

I know you probably won’t go start a fight; chest bump Angel and tell him to get off your turf. But you will take to your Tumblrs, your Twitter accounts and your LiveJournals to bitch and moan about it. But it’s wasted energy and you need to get over it and appreciate the good that has come from it.

Everyone take a deep breath.

Are you going to SDCC2014? Awesome. Enjoy. Get lots of autographs, merch and fun pics. Post them on Instagram and hashtag the shit out of them.

Are you watching YouTube coverage of panels and buying exclusives online? Awesome. I am too.

Should we all just relax and make the best out of our lives and what we can’t control? We sure as hell should!!

Now that that’s off my chest: in honor of Comic Con, I’m giving you guys a Comic-Con exclusive version of one of my classic Bacon and Legs/HoboTrashcan recipes. Remember It’s Always Yummy in Philadelphia? Yeah, I didn’t think so. Well let me tell you about it!

To celebrate the season premiere of It’s Always Sunny in Philadelphia, I had created a cheesesteak and soft pretzel strata recipe. For Comic-Con, this recipe is getting transformed into the Sweet Dee’s Drunken Christmas Strata … a sweet soft pretzel and boozy eggnog strata. Eat it, bitches.

In a large bowl, whisk together eggs, sugar, milk, half and half, bourbon, cinnamon and nutmeg.

Dump in soft pretzels. Toss to combine. Pour into baking dish.
Cover and refrigerate. Be patient. Wait at least an hour (or up to overnight if you can) so the pretzels can absorb the custard.

Meanwhile, melt butter and toss with oats and brown sugar.

After 45 minutes, remove from oven and discard the foil. Crumble the brown sugar mixture over the top of the strata. Return to oven and bake another 25 minutes.

Serve warm with whipped cream and a sprinkle of nutmeg. Don’t let Frank and Artemis near it. 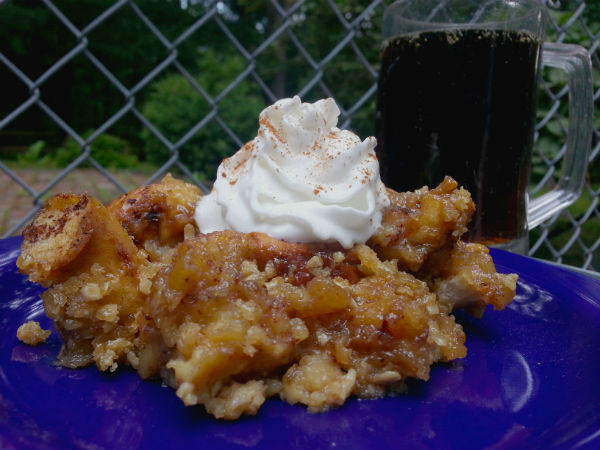