When the first Hunger Games film was released, I remember many dismissing it as a Battle Royale ripoff looking to capitalize on cinema’s young adult craze.

Watching the fourth and final film of the franchise, I’m amazed at how little I cared about the gimmick of teens hunting each other for sport. That might be the hook that initially brought people in, but the story has evolved past those savage battles into something much more fascinating – a battle for the soul of the dystopian world of Panem. In fact, when this final movie found a (fairly clever) way to still include the trappings of the games, I was surprised they hadn’t just abandoned that conceit altogether.

It may be a YA film with a PG-13 rating – and a blockbuster to boot – but I’m impressed with writer Suzanne Collins refusal to take the easy way out. Katniss Everdeen (Jennifer Lawrence)’s story is a fairly traditional hero’s journey, yet Collins adds a level of bleakness and moral ambiguity that elevates this saga from the standard action fare. Even as this movie builds to the climax you are expecting – Katniss storming the capital to murder the evil President Snow (Donald Sutherland) – she begins to have doubts about her own side’s morals, wondering if she may just be trading one sadistic regime for another. I was captivated by this final film’s look at these disturbing shades of gray. 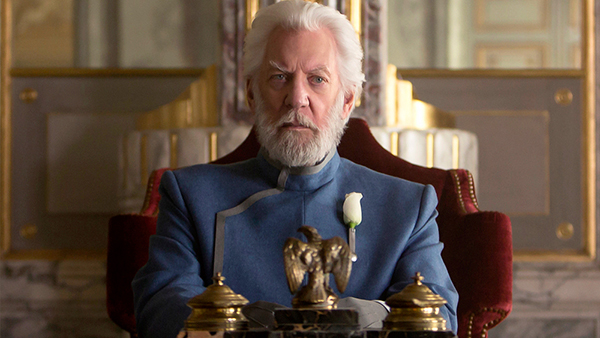 As a quick refresher, Katniss rose from a reluctant participant in Panem’s annual Hunger Games to the face of a revolution looking to put an end to the Games and to President Snow’s reign. Hiding underground in District 12, the rebels use Katniss’ popularity to sell their cause through a series of propaganda films aimed at winning hearts and minds. But the capital responds by using Katniss’ partner in the Games/romantic interest Peeta Mellark (Josh Hutcherson) as the face of their side, torturing him in order to get him to toe the party line.

As Part 1 concluded, the rebels rescued Peeta and the other tributes being held captive by the capital. But it soon becomes clear that President Snow allowed this to happen, having so deeply tortured Peeta that his brain has been rewired to believe Katniss is the cause of all of his problems. So the film wrapped up with a cliffhanger rivaling The Empire Strikes Back for bleakness – Peeta attempting to choke the life out of Katniss, then thrashing uncontrollably in a bed he’s strapped down to as Katniss watches from behind a two-way mirror, tears streaming down her face.

In Part 2, Peeta struggles to regain his sanity, Katniss goes rogue and leads a small band of soldiers on a mission to kill Snow and the capital defends their city by using traps from the Games hidden throughout the streets.

It feels like a suitably grande and tense finale. But again, what impressed me most was the moments in deviated from the expected script. There’s a moment toward the end where the film feels like it’s about to give us a flat, unsatisfying resolution, only to pull it all together by offering an unexpected, though ultimately more rewarding one. There was a huge smile on my face as I began to realize where things were headed and the film perfectly delivers on its climactic moment.

Which is not to say the film is perfect. There are a few missteps, most notably the death of a major character that is handled terribly. Killing a major character unexpectedly can be a compelling surprise if done well, but this character entered the scene out of nowhere and was killed seconds later, so I was left scratching my head about what exactly happened and how it happened instead of properly absorbing what I was seeing. It seemed like such a waste to kill the character in such an uncompelling and confusing way.

Also, as much as I loved the climax of the film, I felt like the actual end was a bit too long and unnecessary. There’s a very sweet scene where two major characters share a tender moment of peace that feels like it should be the end of the story. But this scene is followed up with yet another scene that shows us these two characters’ lives a few years down the line which felt completely unnecessary and was a less satisfying coda than the previous scene. It felt like they didn’t know the right moment to drop the mic and walk away.

But these small problems aside, I really enjoyed this film. The action scenes were compelling and well-shot. From Jennifer Lawrence on down, the performances were fantastic, particularly Sam Claflin (who plays Finnick Odair) and Jena Malone (who plays Johanna Mason) who both stole every scene they were in. And Donald Sutherland also deserves praise for making Snow such a compelling and charismatic villain, one I couldn’t turn away from.

It stumbles a few times along the way, but the Hunger Games franchise goes out on a high note, giving fans a satisfying conclusion to the dystopian saga. 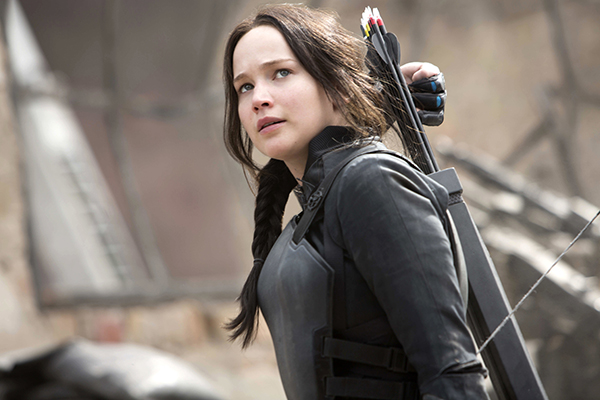