Sometimes a movie is more than the sum of its parts.

On paper, Keanu feels like a simple, unambitious comedy. The adorable kitten, wacky drug hallucination and fish-out-of-water dynamic with the two sheltered protagonists crossing paths with gangsters are all elements we’ve seen before. But the story is so charming and fun that the film coasts on the good will it builds early on and the likability of Keegan-Michael Key and Jordan Peele.

The film opens with an epic shootout scene shot with a John Woo flare that shows us two fierce assassins from Allentown, Oil (Jordan Peele) and Smoke (Keegan-Michael Key) Dresden, gunning down a cartel. In the ensuing chaos, an adorable kitten escapes.

The kitten eventually finds its way to Rell Williams (Jordan Peele), a depressed stoner who has been sulking in his house ever since his girlfriend left him. Rell instantly falls in love with the kitten, naming it Keanu. His love for this animal gets him out of his funk and gives his life new purpose. But then, while Rell is out with his cousin Clarence Goobril (Keegan-Michael Key), his place is robbed and Keanu goes missing.

Getting a lead from the skeezy drug dealer next door, Hulka (Will Forte), the two head to Hot Party Vixens, a strip club in the hood that is home base to Cheddar (Method Man) and his gang. Cheddar indeed has Keanu, who he’s renamed New Jack. Cheddar mistakes Rell and Clarence for the Allentown brothers and offers to give them back Keanu if they help his gang on a big drug run. 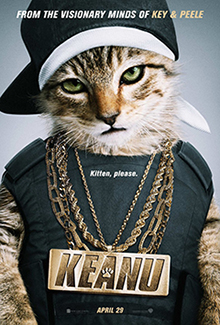 Some of the best comedic moments come from Clarence’s attempts to let loose while on this bizarre journey. He’s a married man with a child who has trouble being spontaneous or doing fun things for himself. His biggest joy in life is grooving out to George Michael tunes alone in his car. But he’s able to bond with the gangsters by teaching them team building exercises he uses in the business world and by offering them fatherly advice. Again, it’s a well-worn comedic formula, but Key plays the character so sincerely and the jokes are so silly that it works.

It’s not just Clarence though; all of the characters are fun and well-written. Jordan Peele wonderfully milks the highs and lows of the emotional roller coaster Rell is on. Cheddar feels like a fun riff on Cheese, the character Method Man played in The Wire. Tiffany Haddish gives a standout performance as HI-C, a lieutenant in Cheddar’s gang who is very skeptical of Clarence and Rell. Luis Guzmán, Will Forte and Nia Long all have fun supporting roles. And Keanu is as adorable and charming as advertised.

While silly and slightly absurd things happen in the film, the duo does a good job grounding things and putting their characters in a fairly realistic world. There are real consequences to people’s actions. Murder is treated as shocking and horrible. The story is tightly written and, outside of a slight deus ex machina at the end, it feels very organic. Fans of some of the more absurd Key and Peele sketches may be disappointed that they don’t get as crazy as they have in the sketch show, but I actually think it helped make the film work.

Of course, while most of the film is grounded, they do deliver a wonderfully surreal drug hallucination scene. Talking about any of the particulars would spoil the fun, but the scene features two really wonderful homages and a great surprise cameo. It also offers a bit of character development for the person involved.

Keanu isn’t world changing. It plays with tropes and dynamics we’ve seen in comedies before. And, on some level, it feels a bit “safe.” But it’s two leads are so charming and the titular kitten is so adorable that it all works. It has a lot of really solid laughs. If you are looking for a fun distraction, I highly recommend it. 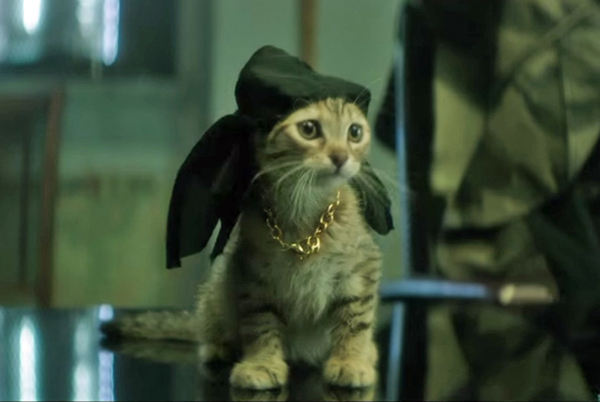