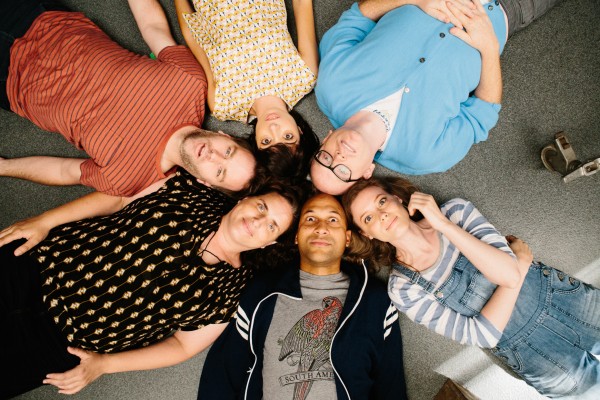 Last September, I went to an improv show in New York.

It was an invite-only show featuring a stellar line up of comedic talent – Keegan-Michael Key, Gillian Jacobs, Mike Birbiglia, Kate Micucci, Tami Sagher and Chris Gethard. I drove from Baltimore to New York one Thursday morning in September to see this special performance. They came out and introduced themselves as the Commune. Then, Birbiglia asked if anyone in the audience had a bad day. They used the audience member’s response to launch into a hilarious scene about an apartment that had a bathroom in the kitchen and two orphans living inside of it.

This scene, which they ran through several times, serves as the opening to Birbiglia’s new film, Don’t Think Twice. Like the rest of the people there, I was an extra working on the film. Birbiglia posted an open invite to his fans inviting them to come to New York to play audience members and I was one of the people lucky enough to respond first. If you watch the film, you’ll see a close up of me laughing at the end of the scene.

It was a long day mostly spent waiting in holding for them to call us to the set. It was dark by the time I got back to my car and headed home. I chalked it up as a fun experience and went on with my life. I had no way of knowing at the time how much the experience would come to mean to me. It wasn’t until almost a year later, when I finally saw the film at a press screening in Los Angeles, that I realized how closely the overall story mirrored my own improv journey. It was oddly cathartic to see the story unfold onscreen.

Clearly, I’m not the only one who feels that way. As Keegan-Michael Key explained to me and a group of reporters at a press luncheon, the first time he spoke to Mike Birbiglia about the film, he told the writer/director, “You have written a movie about my life and we’ve never met.”

By tapping into his own experiences, Birbiglia created a universal film about artists that really looks at how we define success. The inspiration for Don’t Think Twice came from his wife, who saw how communal improv is even though improvisers performing together have wildly different backgrounds and have achieved wildly different levels of success:

My wife said, ‘Your standup friends are very combative and always making fun of each other – in a fun way, but still. And your improv friends are so much more supportive and it’s all about the group, it’s all about saying yes and agreeing. The irony is that some of these people in your improv group are so successful that they’re literally millionaires. And some of them are barely paying their rent on their shared, five-person, one-bedroom in Bushwick.’ It was a very astute observation. I thought it was an interesting premise for a movie – the idea that in an improv group, everyone is equal until they’re not. The principals of art are like socialism, and life is like capitalism.

In the film, the Commune learns the will be losing the theater space they’ve been performing at for years. Further complicating things is the fact that one of the members of the troupe gets cast on Weekend Live, Birbiglia’s not-so-subtle nod to Saturday Night Live. In essence, it’s a film about an improv troupe’s time together coming to an end. As the film explains, this is the beauty of improv; that it isn’t meant to last. It only exists for a moment, then it’s gone. On a larger timeline, this is also true of improv troupes, and, well, life itself.

My fiancé, Molly, and I met through improv. We performed together in a troupe called Remote Possibilities in Baltimore. We all just immediately clicked and quickly became a family. We all celebrated together as we got accepted into festivals across the East Coast. And we were all there for each other when one of our troupemates made the incredibly brave decision to come out as transgender or when another troupemate had a crowdfunding campaign to help with overdue loans or when Molly’s health began deteriorating due to a rare connective tissue disorder called Ehler-Danlos. I honestly don’t think I could have made it through the past few years without them. 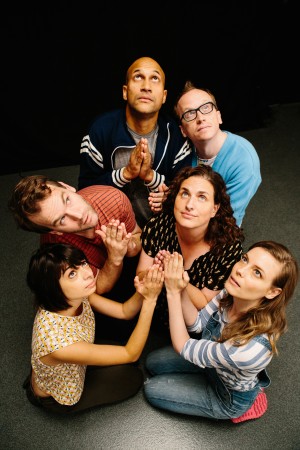 It seems the cast of Don’t Think Twice had a similar experience. As Kate Miccuci explained to us at the press luncheon: “We all knew each other a little bit. Then we got together and it just clicked. You can’t plan for it. That was just a really lucky thing that, after two weeks of hanging out, it felt like we had been together so much longer.”

That comes through onscreen. The group chemistry is so believable and their interactions ring true for anyone who has performed as part of an improv troupe. The way they make light of horrible situations or playfully bust each others’ chops are spot on. I know these people. I’ve performed with them.

In the film, two of the members of the Commune date – Jack (Keegan-Michael Key) and Sam (Gillian Jacobs). There is a scene where the two are in bed together and they can’t can’t stop making jokes. Sam pretends to throw up in Jack’s mouth when they are about to kiss. This is something Molly has done to me before. Their relationship is eerily similar to our own. (This made for a very awkward viewing experience when Jack and Sam began to have problems in their relationship. Luckily, Molly and I are doing great.)

Jack is the one who gets on Weekend Live, upsetting the status quo of the troupe. Similarly, Molly and I decided to move to LA, upsetting Remote Possibilities’ status quo. There was actually a screening in DC of the film as part of a promotional tour leading up to the official release. My troupemate (and one of my best friends) Andy invited me to the screening with him, but unfortunately it was scheduled two days after we left for Los Angeles.

It ended up being much more fitting, and much more emotional, to see it by myself at a press screening in LA a month later. I am Jack. I left my troupe behind in search of fame and fortune and I’m left to feel isolated because of it.

Ever since watching the film, I’ve been missing improv incredibly. Remote Possibilities just performed in the Baltimore Improv Festival – without us. While I’m very excited about this new chapter of my life, I can’t help having moments of doubt. But I know I never would have been content staying in Baltimore. I had to take a chance at achieving something bigger.

Of course, this is a central theme of Don’t Think Twice. What is the true measure of success? It’s something the cast members have thought a lot about. They’ve come to realize that success can mean very different things to different people.

For Birbiglia, the work he’s done has been its own brass ring. “I feel like I’ve made it now because I’ve made three one-person shows and two feature films in the last eight years, outside of the system,” he said.

Micucci had a very specific moment where she felt like she finally made it. “I love raspberries,” Micucci explained. “And that’s a more expensive fruit. And I’d always go to get apples because I could afford apples. And I remember the day that I bought raspberries and I didn’t look at the price and I thought, ‘Oh my god, I’ve made it.'”

Whatever your definition of success is, Key has specific advice on how to feel content. “Be with a group,” said Key. “Adopt yourself into a group and have a community. And then, really take the time to figure out in your mind what does it mean to be fulfilled? Then maybe you’ll tell yourself a new story. If you know what you want to be fulfilled in your heart, then you don’t have to achieve a certain thing.”

Molly and I were lucky enough to find that group, even if they’re currently 3,000 miles away. We may never perform with them again, but that’s the nature of improv. It isn’t meant to last.

Film, however, is more permanent. And, deep down, it’s reassuring to know that my image is locked inside Don’t Think Twice forever, experiencing great improv and having the time of my life. 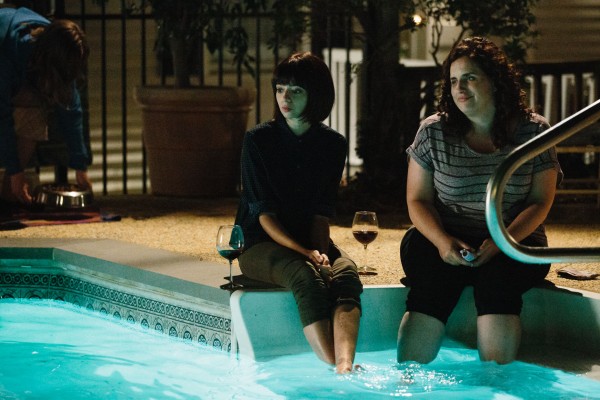