“Don’t you see the danger … inherent in what you’re doing here? [It] is the most awesome force the planet’s ever seen, but you wield it like a kid that’s found his dad’s gun.”

I’m not a very politically active guy. Unless, of course, if by “politically active” you really mean “sits around and bitches about almost everything without ever actually doing anything about any of it.” If that’s your definition, then I’m John Locke, Harvey Milk, Nelson Mandela, Ayn Rand and Martin Sheen all merged into one paradoxical Voltron of political activism.

But if you insist on the traditional definition, then me … well … not so much. It takes a lot of time and effort to go rally against or in support of stuff, and they usually don’t serve cocktails or have recliners aimed at TVs running marathons of Dating Naked at the rallies so … yeah … I’m out.

Until this year. This year I am highly motivated to support a candidate in the race for U.S. Senator for the Commonwealth of Pennsylvania thanks to this amazing TV spot produced by the fine folks at the Senate Majority PAC …

Impossibly cute! Mission accomplished, Senate Majority PAC! By highlighting this very important facet of Republican Pat Toomey’s character in this brain-worm of a commercial, you’ve tipped the scales, making my voting decision in the upcoming election this November easy and me happier than a Kardashian touring a mirror factory.

Once I saw Toomey in that video with those positively scrumptious massaging cats, he had my full support. And I am sure that I am FAR from alone on this.

A YouTube search for the term “cat” returns 57.4 million results. That’s almost one and a half times as many results as the term “Pokemon,” twice as many as “Bieber” and nearly 500 times the number returned from searches for “Toomey” and “McGinty” (his Democratic opponent) COMBINED.

And that, of course, is why they made the spot. EVERYONE alive in the YouTube era loves videos of cats doing whacky and/or sort of anthropomorphic people things like flushing toilets, playing pianos or massaging each other. Which is also why the effect of this spot on voters is probably going to be exactly the opposite of what they intended.

Do they honestly think that five seconds after YouTube Cat junkies see this spot on their televisions that their big takeaway is going to be that Toomey is a greedy, soulless Wall Street lackie, whose loyalty, like that of every other federal level politician (with the possible exceptions of Trump and Sanders), lies with: 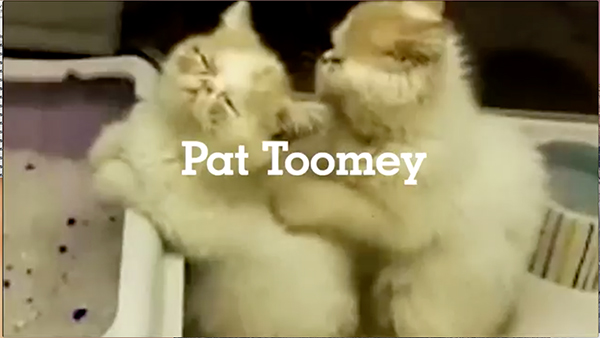 Awwwww … Too a-fucking-dorable for words!

And that’s the problem. No one but hardcore Democrats, anti-Wall Street conspiracy theorists and “dog people” will see past those darling, kneeding felines to the “you scratch my back, I’ll scratch yours” quid pro quo metaphor. The viewers that don’t immediately abandon their televisions and slip helplessly into a YouTube Feline vortex/fugue state that steals the next six hours of their lives and leaves them searching for where they can purchase massage cats to work the resulting knots out of their necks are only going to remember this simple transitive equation:

Having adorable cat videos in your arsenal is like being Charles Xavier; you have the power to hypnotize millions of people and subconsciously bend them to your will, so you must be very careful with how you use that shit.

I don’t care if the Senate Majority PAC anonymously leaks a story to Radar Online, TMZ, The Daily Mail, World Star Hip Hop and Perez Hilton claiming that the kitties in the video were illegally trafficked, unlicensed massage cats that Toomey hired through the “body rubs” section of backpage.com and paid with campaign funds, IT’S TOO FUCKING LATE – THEIR AD SCREAMS “CAT LOVERS VOTE TOOMEY, HE’S ONE OF YOU!”

So unless the Senate Majority PAC can work a co-op deal with World’s Fuzziest Videos to repair the damage, McGinty may find herself, through no fault of her own, on the outside looking in this November.

At least her defeat will serve as a lesson to every other PAC and campaign: Senate Majority PACs semi-YouTube savvy visual media producers were so preoccupied with whether or not they could, they didn’t stop to think if they should.