Suicide Squad is a bipolar film. It bursts out of the gate with energy and personality, introducing the audience to its team of antiheroes with colorful on-screen bios and peppy, yet surprisingly-on-the-nose music (which include “House of the Rising Sun” by The Animals, “Sympathy for the Devil” by The Rolling Stones and “Dirty Deeds Done Dirt Cheap” by AC/DC). But just when it seems like DC Comics may finally inject some much-needed fun into its overly-serious cinematic universe, the film switches gears to give us a series of dull, interchangeable fight scenes and a jumbled finale that disappointingly features a potentially-cataclysmic hole in the sky.

I wish I could believe the bipolar nature of the film was a brilliant nod to one of its protagonists, Harley Quinn (Margot Robbie). But the film makes it clear that it fundamentally misunderstands what has made the character beloved by fans over the past two decades. Instead, it feels like the shift in tone from playful mischief to dull, predictable Apocalyptic action is an ideological battle that happened during the filming process (and most likely lead to the film’s announced reshoots); one where the clear loser is the audience.

Suicide Squad takes place after the events of Batman vs. Superman. Amanda Waller (Viola Davis), a high-ranking government official, sees the rise of metahumans like Superman as a threat to national security. She believes our country’s best hope to protect ourselves is to assemble a group of prisoners with abilities or particular skill sets to be a part of an experimental team she’ll be in charge of. The team is lead by Rick Flag (Joel Kinnaman), a solider Waller recruits because he’s in love with June Moone (Cara Delevingne), who is possessed by the meathuman Enchantress. (I can only assume their Facebook relationship status is “It’s Complicated.”)

To keep the prisoners Flag leads in line, Waller implants explosive devices into their skulls that can be detonated by her or Flag if they step out of line or fail in their mission – making them her personal “Suicide Squad.” The team consists of a sharpshooter named Deadshot (Will Smith), the unstable Harley Quinn, skeazy Australian thief Captain Boomerang (Jai Courtney), pyromaniac Diablo (Jay Hernandez) and giant lizard-man Killer Croc (Adewale Akinnuoye-Agbaje).

Will Smith is basically playing Will Smith in the film. His version of Deadshot bears little resemblance to the comic book character. Comic book Deadshot is a gruff, heartless assassin who genuinely doesn’t care if he lives or dies. But Smith’s version of the character seems to be a misunderstood family man who just wants to raise his daughter … and kill the occasional mark in order to put food on the table. It would have been interesting to see Smith step further out of his comfort zone to play a darker, less heroic character, but I suppose “If it ain’t broke, don’t fix it.”

While I wasn’t really bothered by Smith’s portrayal of Deadshot, I was disappointed with the way the film portrayed Harley Quinn. Harley is a tricky character to get right. She is essentially in an abusive relationship with the Joker. As Harley’s creator, Paul Dini, describes it, this was his original vision for the character:

I decided to make her a funny counterpart to the Joker to maybe work up a little “Punch and Judy” attitude between them. Then, I thought, “What if the girl made jokes too, but her jokes were actually funny and the Joker looks for a reaction from his henchmen and he kind of has to scowl at them before they laugh and applaud, but the girl henchmen would naturally be funny and the guys would laugh at her more?” And the Joker would be irritated by that, but still have this strange relationship with the girl where she’d be part of the group. He wouldn’t just shoot her and throw her out.

The key to making Harley work is that she has to have agency. There has to be an empowerment to the character. She can’t simply be the Joker’s plaything or else it makes their already-unhealthy relationship extremely uncomfortable to watch. Margot Robbie seems to understand the character and plays her brilliantly. She perfectly taps into the way Harley uses her instability as power; leaving those against her wondering just how in control of her actions she actually is. She gives the character strength and nuance that doesn’t seem to be there on the page. 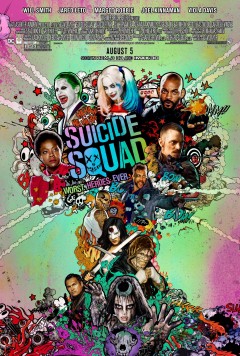 Writer/director David Ayer doesn’t seem interested in empowering Harley. He seems preoccupied with dressing her in skimpy outfits and objectifying her as much as possible. Worst of all, he seems to think that what we want to see is Harley be a doormat to an abusive Joker (Jared Leto). All throughout the film, the Joker treats her like garbage or like a sex toy (at one point literally offering her up to another man as a gift) and instead of having her grow in any way or stand up to him (something the original Harley eventually did in Batman: The Animated Series), Ayer seems to think we should be rooting for her to go back to the Joker for further abuse.

Making matter worse is pretty much everything about Leto’s portrayal of the Joker. Leto, who seemed to spend most of his time on set harassing his coworkers with his abusive version of “method acting,” plays the Joker as a Juggalo pick up artist with zero charisma or nuance. Heath Ledger’s iconic portrayal of the character was always going to be a tough act to follow, but Leto’s effort is so laughably bad that I can’t understand how anyone thought it was going to work.

Harley’s lack of growth is symptomatic of a larger problem in the film. All of the characters are static. None of them grow or change. There are no character arcs. That’s just bad storytelling. If none of your characters are at all changed by the events of your film, what is the point?

I was particularly disappointed with how badly they botched Diablo’s storyline, which came the closest to having a arc. Diablo isn’t a character I have any strong attachment to, but Jay Hernandez’s portrayal of him was so compelling that I found myself really invested in the on-screen character. We learn that he is the most powerful member of the team – he can summon fire out of thin air and use that fire to incinerate a room full of people. But he’s become a pacifist because of how troubled he is by the ways he’s used his powers in the past. So clearly he needs to come to terms with his past and use his powers for good. With the compelling performance Hernandez gives, this story arc should have been a slam dunk. Yet somehow, Ayers botches it. Badly.

Speaking of botching things, all of the action sequences are shockingly dull. They feel like really boring video game levels where you’re forced to fight wave after after of indistinguishable bad guys. After the bright, energetic intros we get for the team, the actual action scenes are all dimly-lit and lack any personality or fun. It feels like the work of two completely different directors.

Then there’s the climax, which is a complete mess. The film’s villains are dull, badly-rendered CGI monsters and their plan is nonsensical. It seems to revolves around wiping out humanity though rhythmic dancing and a giant hole in the sky. Plus, in some of the film’s sloppiest writing, the climax centers around the team needing Diablo to use his fire-starting abilities to lure the villain to a bomb. You know, a bomb, which is essentially a device that unleashes an explosion of fire. This seems to be something Diablo is more than capable of doing. For all intents and purposes, he is a bomb. Why he couldn’t just focus his powers to release a powerful controlled burst of flames is beyond me.

Ultimately, Suicide Squad ends up be a frustrating addition to the DC cinematic universe. It could have worked, but it can’t seem to get out of its own way. Margot Robbie and Jay Hernandez’s performances truly are delightful. And I enjoyed the film coming out of the gate strong with a bright, confident tone. But ultimately, shoddy writing, terrible villains and dull action scenes end up weighing it down. 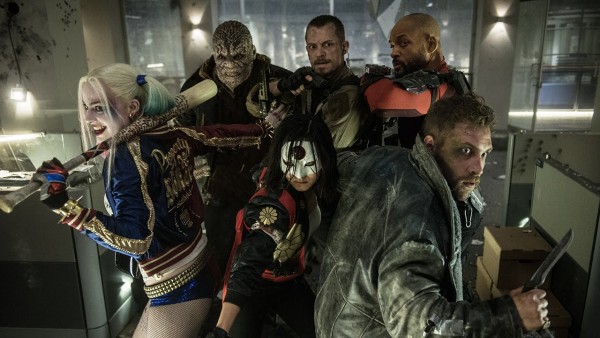