It’s been said that you should never meet your idols. At Stan Lee’s Los Angeles Comic-Con, they seem to take this sentiment to heart. At least, I assume that’s the case, since they did everything in their power to keep me from meeting the convention’s titular attraction.

I should start by saying I was given a three-day media pass to cover the event, which was held this past weekend at the LA Convention Center. Having been unable to attend San Diego Comic-Con this year, I thought it would be fun to check out this local convention. Though, if I’m being honest, a large part of what drew me to the event was the promise of seeing one of my childhood heroes, Stan Lee.

For weeks, I had been telling anyone who would listen how excited I was to finally meet Stan Lee. (Long before that, I have been subjecting anyone unlucky enough to get seated next to me at a social gathering how I think the reveal of Mary Jane Watson in Amazing Spider-Man #42 – with the iconic opening line, “Face it, tiger … you just hit the jackpot!” – is one of the most brilliant moments in all of comics.) I was willing to fight through the crowds, stand in endless lines and spend obscene amounts of cash for the once-in-a-lifetime chance to get a photo of me standing next to Stan.

Luckily, the convention’s 2016 Survival Guide had this helpful tip:

Wanna meet Stan Lee? Cool! Any ticket holder has a chance to get to purchase an autograph or photo from the man himself. All you gotta do is go to Stan’s Booth on the show floor. We recommend making this your first priority and arriving early. Just keep in mind Stan’s lines do get long but he is worth the wait!

I showed up early on Friday so that I could be one of the first people through the doors when they opened at 5 pm. My plan was to head straight to Stan Lee’s booth, which I had already located on their online floor plan. I figured I would try to secure my photo first, then I’d be free to take in the rest of the con. Little did I know that most of my time would be spent trying, in vain, to get my photo op.

The convention started on shaky ground when Friday’s opening was delayed by 25 minutes. It was never made clear to fans why they were being held at the doors. In fact, at one point, they let a handful of fans in, only to abruptly cut off the line. Security then spent the next 10 minutes rounding up the people who had gotten through and sending them back out.

Still, it was a minor hiccup. Once the doors finally did open, I headed straight to Stan Lee’s station. Of course, so did a lot of the other attendees. We all began forming a line at the empty booth. Then we waited. And waited.

At almost 6 pm, an employee headed over to us to let us know that Stan Lee wasn’t going to be at the convention that day. He would only be at comic-con signing autographs and taking photos Saturday and Sunday. However, we could purchase advance tickets for one of those two days so that we could secure our spot in line. There was just one catch … tickets were being sold at the exact opposite end of the convention center. We all raced over in a chaotic throng to line up once again.

I spent the next two and a half hours waiting in that line. It was a painfully slow process as the clearly-disorganized staff secured cash boxes and credit card readers. Eventually, they began working their way through the line. It was close to 8:30 pm when I purchased my photo ticket for Saturday. There was only 30 minutes left in day one of the convention.

I took photos of cosplayers and walked by a few displays, then headed home so that I could rest up for my big day of meeting Stan Lee. When I got home, I checked out the website to see if times were posted for the photo sessions. There were two session listed for Saturday – 1:30 pm and 4:30 pm.

I decided to get back to the LA Convention Center at around 11 am on Saturday. I figured that would give me time to wait in line for the 1:30 session. Then I’d be free to spend the rest of the day exploring the con. The 4:30 slot was my safety net.

I got to the intersection of Pico Boulevard and LA Live Way at 11:08 am. The intersection is within walking distance of the convention center. However, traffic was so backed up (and parking at the convention center was so mismanaged) that I spent the next three hours sitting in traffic slowly crawling around the building in a doomed attempt to be let into the parking structure.

At just shy of 2 pm, I found a random parking lot across from the convention center that was charging $40 (versus the $20 I had paid the day before to park in the building’s official parking structure). I rushed into the con, knowing I had already missed the first Stan Lee photo op. I went straight to the photo area to find out what time I could start lining up for the 4:30 session. I was told to come back at 4 pm.

So I explored a bit of the convention. Then, at 4 pm on the dot, I was back at the photography area. The line was backed up with people still waiting to get their photos taken with cast members from The Flash. But there was a small group of people off to the side who were waiting for further instructions on how to line up for Stan Lee. I joined that group.

It took a long time for the employees to come up with a plan for how to handle our ever-growing group. Eventually, they had us form our own line. I was the eighth person in the line. After a lot of frustrating hurdles, I began to finally get excited. This was my moment. I was going to get to meet Stan Lee. Or so I thought.

At around 4:45 pm, 15 minutes after the session should have already begun, someone came over to our line to inform us that Stan Lee had left the building. Apparently, despite his name being on the marquee, somehow no one had communicated to Stan that he had a 4:30 pm photo session. (Again, this information was listed on the official “Stan Lee Los Angeles Comic-Con 2016” website.) So Stan went home.

We were told they were trying to reach out to Stan Lee to figure out a solution. We should continue waiting in line. Someone would come talk to us “soon.” It was after 5 pm when a woman came and told us that we could either come back and try again tomorrow or we could get a refund. As much as I truly wanted to meet Stan Lee, it was at this point I had to throw in the towel. There were no times listed on the website for Sunday photo ops. And, after two days of being jerked around with only one 30-minute photo session actually offered (that I missed sitting in traffic), they had given me no reason to believe that if I came back again, I’d have any better luck. Most likely, I’d just waste more money on parking, only to suffer the same bitter fate.

At this point, you shouldn’t be surprised to learn that it took them another 30 minutes to get us our refunds. They weren’t sure how to process them, since the money came from Stan Lee’s team. And Stan Lee’s people had all left “Stan Lee’s Los Angeles Comic-Con.” Eventually, they came up with a plan. And I was handed back my cash. I headed straight for the exit.

As you would imagine, I felt pretty defeated by the whole experience. However, there is a silver lining to this debacle. On Saturday, while I was killing time waiting to line up for the 4:30 photo session, I got in line for another photo opportunity. The Hot Topic booth was offering a chance to meet Grumpy Cat. All you had to do was purchase a $12 plush Grumpy Cat and you were guaranteed a meeting with the Internet’s favorite feline.

Hot Topic had four different people on the floor managing their line. The line snaked around the hall, but the employees had helpful signs they held up to assist people. They were all warm and friendly as you waited. The line moved swiftly. Eventually, I made my way to the front, where yet another employee cut off my wrist band was and I was given some final instructions. Then, a very excited assistant took my camera and fired off several adorable photos of me next to Grumpy Cat. Grumpy Cat’s owner thanked me for coming out. I was handed a coupon for Hot Topic on the way out by another helpful, cheery employee.

I tell you that aside for two reasons. One, it genuinely was a bright spot in an otherwise miserable two days. And two, the professionalism and efficiency of the Hot Topic booth was in stark contrast to the handling of the miserable handling of the rest of the convention. I hope they do a lot of retooling between now and next year. I suggest handing the reigns over to Hot Topic and rebranding the event “Grumpy Cat’s LA Comic-Con 2017.” 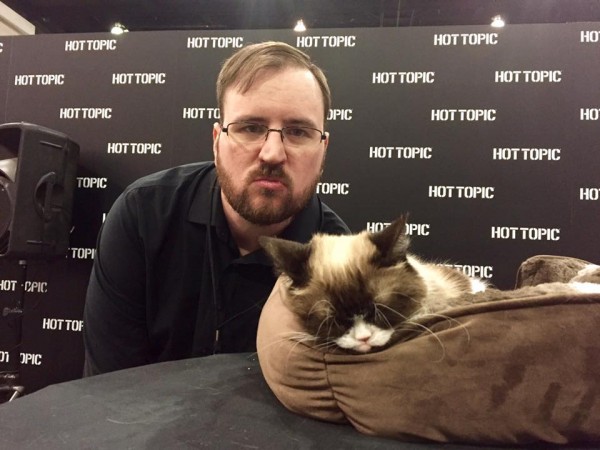