All it took was one small scene in The 40 Year Old Virgin to become a fan of Jonah Hill for life. What’s not to love about a guy who wants nothing more than to be able to buy a pair of hooker boots with goldfish in them? If it really is about the simpler things in life than Jonah’s got it made. Hill kicked off his boots and sat down with us to talk about life as a writer-turned-actor.

When did you know you wanted to be an actor?

I always wanted to be a writer since I was a kid for like Saturday Night Live or The Simpsons or Larry Sanders – I idolized those guys and I always wanted to write. But I was always a funny kid, I guess, I’m told by my parents. I was in school in New York for writing, but I couldn’t find actors that understood what my mind was writing to convey my thoughts properly, so I eventually was like, “Fuck it, I’ll do it myself.”

I started doing it and people were kind of into it and I fell in love with performing stuff. And doing these kind of movies is so great because I get to write and improvise most of my lines and stuff, so it’s kind of like you get to do both.

Where are you originally from? How did you break into the business?

I’m originally from Los Angeles. I actually grew up out here, which is odd for some people to deal with. I hopefully ended up a cool enough guy.

I moved to New York to go to college to New School University and I was writing in this bar called Black and White in the East Village, which is the coolest bar ever. If you are ever in New York, check it out. It fucking rules. It’s like my Cheers. They had this storytelling and poetry night and I would write these fake stories because I thought the sad stories were so funny. I would tell my friends and they all thought it was really funny. And then, one day Dustin Hoffman’s kids, Jake and Becky, came and saw it and we became fast friends and they were like, “You should meet my dad.”

I didn’t know their dad was an actor or anything, so I was like, “Cool, you should meet my dad. He’s an accountant. His name is Rich.”

So we all started hanging out and he thought I was really funny and he introduced me to a director, David O. Russell, and I auditioned for his movie. That was my first movie, I Heart Huckabees.

You were 19 when you got the part. Do you feel lucky to have landed that role at such a young age?

I was shitting my pants. I couldn’t believe it, man. David Russell is one of the coolest directors in my mind and it was just the coolest thing ever. It was funny, because I didn’t work for like two years after we shot it and I was like, “Well, am I really supposed to be doing this?” It came out a long time after we shot it. So, I did this cool movie and no one had seen it. I couldn’t get an agent or manager or anything. But at the time, I was like, “This is the coolest, craziest thing ever of my life.” And I still have that feeling. If I ever stop having that feeling then I’ll do something else.

In The 40 Year Old Virgin, you had a small, but memorable role. What was it like working on such a great movie with such an awesome cast?

I’d say the highlight of my life was just meeting those guys and getting to work with them – Steve Carell, Seth Rogen and Judd Apatow. They’ve been like family to me ever since. Judd and Seth, I work with them all the time now, which was my dream. They, to me, are the funniest guys around and it was like heaven.

I got there and it was like, “You have one scene. It’s a small scene with nothing written. Just improvise with Catherine Keener.”

I was like, “Awesome.” To me, it was funny because the scene in the eBay store, there was nothing written. But what I found funny was on the way there, I go, “I don’t really know what an eBay store is.” When I was driving to set that day, I really didn’t know what it was and what the concept was, so a lot of that shit I was saying to her was kind of true. The take that they used a lot of was the time when I actually conceptualized what it was. I’m like, “I really can’t buy these?” That was my thought process – are you serious? You can go to a store and see something you want to buy and can’t buy it to me was the funniest concept ever.

It was the best day of my life. I remember every second of it.

After that, you were in Adam Sandler’s movie Click. Between Steve Carell and Adam Sandler, how did any work ever get done? Those are two of the funniest guys out there.

What’s funny is that Adam and Steve both have such an incredible work ethic, you’d be surprised how much work does get done.

Is it a work hard, play hard kind of mentality?

Yeah. They are fun, funny guys – obviously two of the funniest guys on the planet in my mind – but when they’re at work, they’re just professional and cool. When you’re on a comedy set, it’s cool because you get to be funny for work, so it makes it so much more enjoyable. 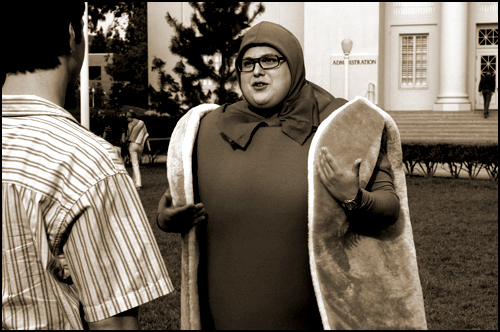 With the movie Accepted, how did you land the role of Sherman and what did they tell you about your character when you went in for the audition?

The character was written in the script as like a young Woody Allen. So when I auditioned for it, all the dudes were wearing like those Woody Allen blazers and talking very neurotically and I was like, “I think it’d be funnier if he wasn’t so neurotic because he’s got to be cool enough to be friends with B, where he’s like funny and cool, but not in the cool ‘getting the girls’ kind of way, just a funny, cool guy, but obviously high strung.” And I just took a different take where everyone I saw read was just trying to do a Woody Allen impression. I had to fight. I went in like 10 times probably for that role. They were not digging it.

What is it like for you right before one of your movies comes out? Do you have any kind of special routines or superstitions? Do you end up going to the theater with us common folks on opening weekend? Tell me what you do.

No, I despise common people. They make me throw up.

This is my first movie where I’m one of the main dudes, so this is really the first time I felt a lot of stake in the movie. I’m nervous. The thing is, everyone who has seen it, including my friends, who are a bunch of cynical assholes, who are completely honest with me and usually don’t like these kind of movies, thought it was really funny. One thing I can say is that I am genuinely proud of it and I think if someone saw it, they would be like, “Oh my god, that is a funny movie.”

I guess I don’t know what I’m going to do. I’m going on Conan on August 10, which I’m really excited about, which was the highlight of my life so far when I found that out. I screamed and ran around naked with all the dudes I was hanging out with.

Who in Hollywood would you like to work with down the road?

I’d say Wes Anderson, definitely. I like Bottle Rocket and Rushmore. All of his movies to me are so awesome. I saw Little Miss Sunshine the other day. It was awesome. I would love to be in a movie like that. Nathan Lane … no, just kidding. Nathan Lane, if you read HoboTrashcan, let’s do Wedding Crashers, you and me.

The funny thing is, if you had asked me that at the way beginning of my career, I would have said probably like Tom Shadyac and Judd Apatow. I’m just so lucky to have worked with them.

We were looking into your career and we see you’re doing a bunch of movies like Evan Almighty, Strange Wilderness and Knocked Up. Which of these future projects are you most excited about?

I’d have to say the most excited I’ve been just to see a movie I’m in is Knocked Up. Evan Almighty is going to be crazy and massive and it’s one of the coolest things to do in the entire world. I think Knocked Up, those are some of my best friends, those guys in the movie.

What’s the premise of Knocked Up?

I play one of Seth Rogen’s best friends and Seth Rogen is the main guy in the movie. We’re running a porn website and we’re really immature. We go out one night and get drunk in a bar and he meets Katherine Heigl, who is awesome and very attractive and a great actress. They get drunk and have a one-night stand and then three months later, she calls and they go to dinner and she is pregnant. So they start dating from when they realize she’s pregnant and I get to be kind of like Seth’s character in The 40 Year Old Virgin, where you don’t have the burden of being the main character and driving the story so much. I just get to go off and be funny. I am so excited.

You said originally wanted to be a writer, but now have established yourself as an actor. Is your goal shifting or will you someday shift back into what you originally envisioned yourself doing?

I’m writing a movie right now with Jason Schwartzman, who is a good buddy of mine. I think very soon we’ll get to see another movie I’m in that I get to write. And that’s the dream. That would be my ultimate dream come true, something I’ve written getting actually made into a movie.

We’ve got one last thing for you here. We are going to do a word association. We’ll just throw out a name and tell us the first thing that pops into your head.