“The Other Woman” Recap and Analysis …

So there’s no recap this week. Do you really need one? Seriously? Okay, fine, then.

In the past, Juliet had an affair with Goodwin – he’s the one Ana Lucia rolled down a hill and stabbed – who turns out to be the husband of her therapist, Harper. It’s not surprising why Goodwin and Juliet began to bump uglies since she’s the hottest woman on the island. Ben, who may be a mental giant but is still a 12-year-old emotionally, doesn’t like Goodwin putting the moves on his pretend girlfriend, and sends him off to die at the hands of the Tailies. Juliet is sad, and bakes dinner rolls.

Meanwhile, back in regular time, which is actually the past, but not as much of the past as Juliet’s flashback – get all that? – Jack’s hunting down Dan and Charlotte (who are, in turn, trying to shut down the chemical sprayers at The Tempest which could kill everyone on the island) while falling in love, Kate’s being a retarded tramp with another head wound, Sawyer and Hurley are playing horseshoes and Ben is playing Locke like a fiddle, as usual, by showing him a tape that proves that Charles Widmore likes riding in the back of shiny, black cars. This, of course, makes him a bad guy, so Locke lets Ben go free. Or something like that.

Oh, and Sun and Jin are in the episode for, oh, about three seconds.

There, satisfied? I can be succinct if I want to. It’s just rare that I want to.

Okay, so that’s all out of the way, let’s chit chat about some minor points, shall we?

Ben and Locke are the bestest of friends
After Ben and Locke’s little conversation this episode, I’ve drawn two conclusions: 1) Charles Widmore is definitely up to something (as I’ve always suspected), and 2) Locke may be the sixth member of the Oceanic Six. Now, going back to Widmore for a minute, it’s always been obvious since Desmond’s backstory that Charles Widmore was going to be revealed as one of the big bads. You could see it coming a mile away … which is why I’m now suspicious the powers-that-be revealed it to us so nonchalantly and cleanly, a mere episode after we see Widmore buying the Hanso diary. They never do that! Perhaps Widmore is just a red herring. We’ll have to wait and see how all this pans out. I do tend to believe that the Freighties are working for Widmore, however, so I’ll just come right out and commit to that.

As for our Oceanic Sixth, the least obvious choice at the beginning of the season was Locke. I mean, the man is fighting tooth and nail for that island and you’d expect him to stay on it in order to discover what he’s supposed to do and to protect it. Now that we’re a few episodes in, I think John’s best hope for protecting that island and finding his way is to leave it. If Sayid is working with Ben to take down the Big Cheese, then why not Locke? Who would be more of a soldier for Ben and the island than Locke? There, I’ve said it. It’s out there. Let’s see if I’m right tonight.

He’s got … to get … his son … back!
The general consensus amongst everyone I’ve talked to is that Ben’s mole on the boat is Michael. That’s pretty much been my feeling for most of the season so far, as well. We all knew he’d be coming back, eventually, and it just makes sense that he’d be the man on the boat. I don’t want to spoil it for anyone, but Harold Perrineau IS coming back to the show. It’s right there for everyone to see on IMDB. Seriously, go look. I know, I know, I hate when things are spoiled for me, but when they put it on the front frickin’ page, what are you gonna do?

Now, just because Michael’s going to be in an episode doesn’t necessarily mean that it’s Michael who’s the mole, right? Heck, it could be Walt for all we know. That’d be a fun little twist. Maybe they’d explain how he’d gotten so big by using time dilation. All I know is that if it’s not Michael or Walt, it had better be one helluva big surprise. Like Boone. Or maybe Shannon. Hey, I’m just saying.

What’s this big red button do?
So Dan’s not only a physicist and quantum theorist, he also appears to be a techno-chemist, as well. Impressive. Most impressive. And also highly improbable. As my girlfriend pointed out after he pretty much hacked a computer and then found a way to neutralize a chemical despite studying very meticulously in the fine science artistry of physics – “That’d be like me trying to sift through primary and secondary mesenchyme cells with a telescope.” I have no idea what she’s talking about half the time, but she’s a developmental biologist, so I’m just taking her word that that’d be really, really hard to do. At any rate, the important part to remember about Dan monkeying around with chemicals is that it doesn’t just save everyone on the island like Miss Charlotte says, it also disables Ben’s biggest line of defense in keeping people off the island. Now the Freighties and Widmore’s other cronies can come and go from the island as they damn well please.

The first explanation, and the most boring, is that Desmond was right in asking Dan where his head protection was whenever he fired up the wayback machine and now Dan’s brain is all full of holes from the radiation. And that’s probably the real explanation.

Another, far more fun explanation has to do with what line of timeline thought and theory the writers adhere to. There are two “arrows” of time to look at in regards to the situation with Dan – divergent timeline theory and static timeline theory. Let’s go to the whiteboard! Yay! 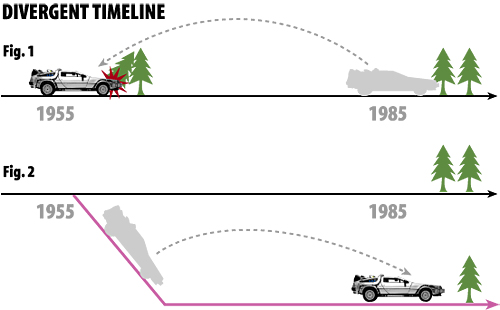 Divergent timeline theory is the cleanest and safest of the theories surrounding time travel and the effects of monkeying around in the past. In Figure 1, you’ve hopped in the DeLorean and gone back to 1955, where you run over one of old man Peabody’s pine trees. At that exact moment, an alternate divergent timeline skewed off from the one in which you first hopped in the DeLorean, so when you head back to the future, there’s only one pine tree (Fig. 2). The other timeline with twin pines still exists, but in an alternate timeline in which you never traveled back in time and killed one of the pines and therefore it is inaccessible to you. 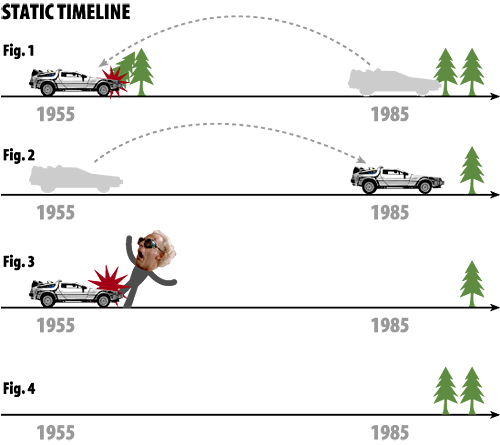 Static timeline theory can get a little hairy. You hope in the DeLorean, as usual, and go back to 1955 and run over one of old man Peabody’s trees, as in Fig. 1. At that exact moment, the entire timeline from that point on is completely destroyed and rewritten based on what occurred in the past. There were NO twin pines in your future, and therefore you would only remember a single, lone pine in 1985. This is a predestination paradox, which basically states that whatever has happened in the past was meant to happen and our current timeline reflects that, immutably. Now, the sticky part comes in on Fig. 3. Let’s say you decide to go BACK to 1955 again and you aren’t paying attention to what you’re doing and run over Doc Brown as he’s crossing the street. At that exact moment, the entire timeline would change, completely eradicating any evidence that you, the DeLorean or Doc Brown ever existed. Oh, and you never ran over a pine tree, either, so now there are twin pines again. That’s heavy, I know. That’s the sticky part of static timeline theory.

Unfortunately, static timeline theory is what makes the most sense in relation to Dan and his memory holes. Basically, at the exact moment that Dan got on the satphone and told Desmond to go see his 1996 self, the entire timeline of the Lost universe was rewritten. The Dan up to that point that had interacted with Desmond was no longer the same Dan. Slowly, Dan began to remember things that happened in the past, like the note to himself in his journal. The “rewrite” of the current timeline may come in waves, or slowly over time. It might not occur at all if the island acts as a temporal hub where spacetime behaves differently from the outside world.

So, yeah, I think that’s what’s happening to Dan. What he told Desmond on the satphone lead straight to a predestination paradox. Desmond was supposed to tell Dan what the wayback machine’s settings were supposed to be so that he could get it working. And since he got it working, Dan has more than likely jumped from the past in to the future, probably more than once, perhaps changing even more timelines along the way. This might also account for Dan’s “swiss cheesing”… he’s jumped so many times and inadvertently changed so much in subtle ways that his mind has been affected since his consciousness would theoretically exist slightly outside the timeline rewrite.

Eh, maybe I’m wrong. But it did give me an excuse to pull out the DeLorean graphics, so it’s all good.

Can you hear me now?
My last thought is a short and simple one, really. The Dharma bungalows are rigged for surveillance, and that’s how the Others are keeping tabs on Ben while he’s being held by Locke. It’s how Harper knew that Ben wanted Juliet to stop Dan and Charlotte, and it’s also why Ben has been able to concoct such an intricate plan. It would also explain why the Others truly haven’t stormed Locke’s camp yet – not because they don’t want Ben anymore, but because Ben doesn’t want to be rescued. He’s right where he wants to be.

And that about wraps it up for this week. In a few hours we’ll know if I’m right about the Oceanic Sixth, and apparently we’ll get to know more about Sun and Jin, or at least that’s what it looks like. Yippee. I’ve got this sinking feeling that we’re about to hit a couple of filler episodes. It’s about that time. Hopefully I’m wrong. In the meantime, though, keep thinking those deep thoughts and let me know what you’re thinking.

Chris Kirkman is a graphic designer/photographer/journalist/geek extraordinaire with way too many Bruce Campbell movies in his library. He is still hoping that Lost will end when Bob Newhart wakes up next to Suzanne Pleshette, complaining of a strange, strange dream. You can contact him at ckirkman@hobotrashcan.com.