It’s been a long, hard road for Lost’s Dr. Jack Shephard, but last night he finally showed that after six seasons of being stubborn and smashing things, he finally gets it. Jack certainly hasn’t always been the easiest character to love, but I hope that after last night’s episode, all of you, like me, returned to your seat on the Jack bandwagon.

There is a lot of Jack hate out there, much of it justifiable. Our own Chris Kirkman has definitely had a few choice words for the good doctor over the years. Even I have found myself rolling my eyes a time or two at Jack’s stubbornness. But while at times you just want to sever the guy’s dural sac, it’s easy to forget that at his core, Jack has always been pretty awesome and loveable guy.

Think back to season one. The very first shot is a close up of Jack’s eye. He’s the first character we are introduced to – the first one we make a connection with. From that moment on, as the pilot unfolds, Jack begins saving everyone else’s lives at a breakneck pace. What I’ve always loved about the guy is his intensity in those situations. A switch flips in his head and he just goes full speed with no regard for his own well-being. Go back and rewatch the episode where he gives his own blood to Boone in an attempt to save Boone’s life (even though, at that point, it’s pretty clear Boone isn’t going to make it). Sun finally has to convince Jack to stop the transfusion. You get the impression that if she didn’t, he would just keep giving his own blood to Boone until Jack either passed out or died.

Of course, what I’ve really always found compelling about Jack was what a train wreck his personal life actually was off the island. It’s not that Jack is a hero – in today’s television landscape, a true white hat hero would be boring to watch. No, Jack’s not a hero. Instead, he has a hero complex. He needs to fix things, needs to be everyone’s savior. Maybe I’ve just always been drawn to characters on the verge of a nervous breakdown, but I’ve always really been fascinated by the way Jack always seems to be dancing on the edge of a precipice. It’s been both compelling and heartbreaking to see him finally tumble over that edge. (And, as a bonus, when he did finally snap, he grew that amazing Ron Burgundy beard.)

That being said, I completely understand why fans started to turn on Jack. I think it all started back in season three, before the makers of the show had set a definite end date. Season three will forever be remembered as the season where the show just plodded along without a rudder; the writers unsure how much real information to give away since they didn’t know how long they would have to stretch the show out. I’ve actually heard that the thinking by ABC executives at the time was that the show could go on forever. In their minds, Dr. Jack Shephard was the star of the show – just give the fans a Jack-centric episode and they will love it. That is, of course, how we ended up with one of the most pointless episodes of the entire series – the infamous Bai Ling “Jack’s tattoo” show.

Jack’s image could have been salvaged after season three, but even after the Damon Lindelof and Carlton Cuse set a definite end date for the show, Jack still remained rudderless for a while. In order to play up the “Man of Science/Man of Faith” conflict between Jack and John Locke, Jack turned into a giant douchebag who kept arguing that the island wasn’t special and there was a rational explanation for everything going on, even though he had already seen his dead father, a smoke monster and Richard Alpert’s beautiful, ageless eyelashes. Not since Scully in the later seasons of The X-Files had a character so desperately grasped at straws in an attempt to rationalize away the supernatural.

Of course, building conflict between Jack and Locke wasn’t the only reason for Jack’s stagnancy in character development. The other problem the writers had with Jack was one many writers face – you can’t really have Jack get better until the show is ready to wrap up. It’s the same reason Dr. Gregory House is still struggling with his pain pill addiction and why, after it seemed like she was cured, Tara Gregson is one again being overtaken by her alters. If Jack finds inner-peace and finally stops fighting the island in season four, it kind of ruins his arc in seasons five and six. A mentally healthy character who finds inner-peace is a boring character.

What’s great now, as the show winds down, is that the writers can finally give Jack the ending he deserves. Ever since he took that timeout after smashing the mirrors in the lighthouse, Jack has finally reached enlightenment. He was the only character who didn’t want to leave the island on the sub last night (of course Kate, with her uncanny ability to have firearms drawn on her, got shot, which forced him onto the sub). Then, on the sub, he got to be in the John Locke role as he attempted to convince everyone that nothing would happen if they let the bomb count down to zero (which is the second time he’s done that this season – the first being on the Black Rock with Richard). Sawyer was actually the character in the “Man of Science” role – dismissing Jack as crazy and pulling the chords on the bomb anyway.

Of course, if Jack’s faith in the island at that moment and his take charge attitude once the sub began to sink (he was once again ready to drown alongside Sun and Jin in order to try to save Sun), your heart had to melt a bit once he finally got to the shore. I held up okay when Sun and Jin drowned together and when Hurley and Kate started to break down, but when Jack walked away from the rest of the group to cry by himself, I almost had to find my own little corner of the beach to start bawling. 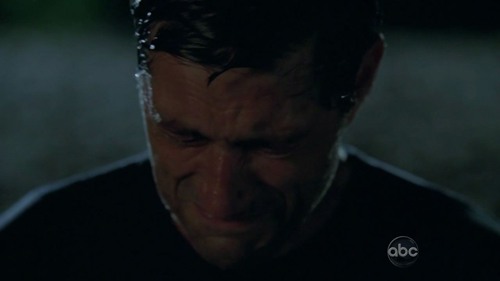 Most interesting, of course, was the fact that Sayid told Jack to find Desmond in the well “because it’s going to be you, Jack.” All season long, we’ve been told about the candidates and it’s been implied that someone will have to step up and replace Jacob. It seems like, at least in Sayid’s eyes, Jack is the man for that job. I, of course, happen to agree with Sayid. Being a deity engaged in an eternal battle with Smoke Monster Locke seems like a fitting job for a guy with a hero complex. So I’m really happy that he ended up where he has, even if the road getting here has been a bit bumpy.

Of course, even if you don’t agree with me that Jack has finally redeemed himself, I think we can all safely agree on one thing – Kate still sucks.