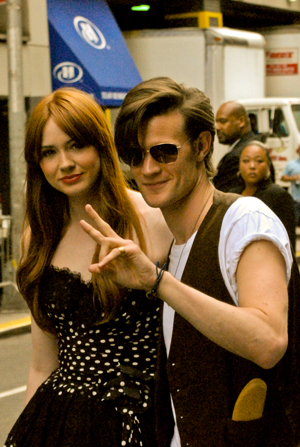 With a pack of enthusiastic fans herded behind barricades, from a distance the Doctor Who Series Seven premiere in New York City looked like a typical big Hollywood event. However, upon closer inspection, it was clear that these weren’t your average fans or Hollywood stars.

Instead of arriving in black stretch limos, actors Matt Smith and Karen Gillan pulled up in front the Ziegfeld Theater in matching DeLoreans, a clever play on the British television show’s time travel theme. They posed for photos in front of the cars with the event’s post-screening Q&A panel moderator, Chris Hardwick, and executive producer Caroline Skinner before doing a quick round of autograph signings.

With Doctor Who’s popularity in America at an all-time high, BBC America turned to the largest single-screen theater in Manhattan. The 1,100-seat theater was filled to capacity, with fans in fezzes and elaborate costumes cheering loudly throughout, including during a brief on-screen glimpse of former Doctor David Tennant in a teaser for his new show The Spies of Warsaw. Again illustrating that they weren’t your average audience, the crowd held up lights as if it a rock show, but instead of raising lighters or cell phones, the attendees held up Sonic Screwdrivers, The Doctor’s all-purpose tool. The tickets for the event, which were priced at 11 cents in honor of the eleventh Doctor, sold out in just minutes. Fans looking to score the best seats in the house showed up as early as 6 a.m., 12 hours before the premiere began.

The premiere episode, “Asylum of the Daleks,” kicks off a five-episode story arc that will say goodbye to the Ponds, The Doctor’s current companions, played by Karen Gillan and her on-screen husband Arthur Darvill. Before the screening, Matt Smith gave a passionate plea to the audience not to give away any spoilers, so we won’t delve into plot details, but as the name suggests, it features The Doctor’s oldest foes, the Daleks. To introduce the episode, the panel said show runner Steven Moffat was attempting to making the Dalek’s scary (which isn’t an easy task considering they are small aliens with nasally voices who travel around in metallic suits that look a bit like fancy trashcans). Without giving anything away, we will say that in typical Moffat fashion, the episode feels epic and contains a few surprising revelations. It also introduces an intriguing obstacle for the Ponds to overcome during their farewell stint.

The teaser for the remaining four episodes promised plenty of other epic moments as well, including dinosaurs inside the TARDIS and the return of the Weeping Angels in the fifth and final episode, “The Angels Take Manhattan” (which was filmed on location in New York earlier this year). There will also be time for quiet introspection though, as both the fourth episode “The Power of Three” and the online miniseries “Pond Life” (which begins airing on YouTube today) examine Rory and Amy’s lives in-between visits from The Doctor.

The Hardwick-hosted Q&A session after the screening featured a few interesting revelations. Perhaps the most amusing one was when Gillan was asked if Darvill was a good kisser, which caused her to blush and giggle before saying “technically yes” he is, though kissing him felt like “incest” due to their off-screen friendship. Smith and Gillan were asked if, like former Doctor Tennant and his companion Catherine Tate, they did a Shakespearean play together, what would it be? They both agreed on MacBeth. Smith also promised a “new king among hats” in this year’s Christmas special and introduced the audience to his mother, who was there in the audience. He also gave a shout out to the show’s composer Murray Gold, who was also in attendance. Gillan was a bit emotional throughout the screening, admitting she was choked up several times during the episode. She was visibly sad when she realized the event would be her last screening with Smith.

“Asylum of the Daleks” airs at 9 p.m. on BBC America. If you are excited for the premiere, make sure to check back to the site every day this week, as we will be running interviews with Matt Smith, Karen Gillan and Caroline Skinner that were conducted at BBC America’s offices prior to the screening. 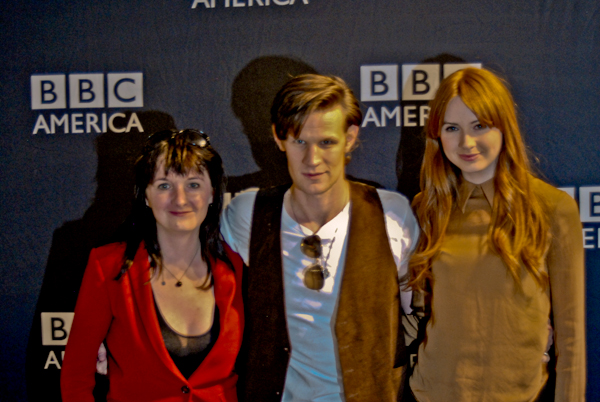 Hobo Radio 616 - Doctor Who?
Hobo Radio 458 - I should have been listening before
Hobo Radio 444 - Sorry if we've disappointed any of you at any point throughout our journey
Hobo Radio 437 - Cat Cafe (ft. Fontina Turner)
Hobo Radio 435 - Too much TV
Hobo Radio 432 - An unstoppable killing machine
Comments (1)