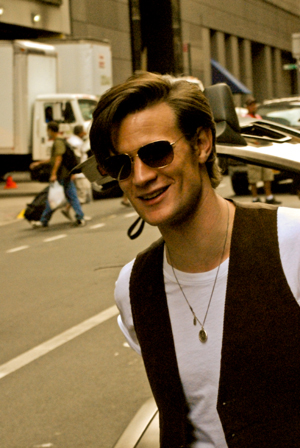 He’s faced Daleks, Cybermen and the Silence, but this season The Doctor will face one of his greatest challenges – saying goodbye to Amy and Rory. The eleventh Doctor, Matt Smith, described the five-episode arc beginning this Saturday as “the fall of the Ponds.”

We caught up with Smith at BBC America’s offices before the premiere of “Asylum of the Daleks” at Ziegfeld Theater in New York City to talk about the new season, his love of New York City and his secret desire to see The Doctor swinging from trees with Tarzan.

In the trailer for series seven, Amy tells The Doctor, “This is what happens when you travel alone for too long.” How will the departure of Amy and Rory effect your character? After the Ponds leave the show, will The Doctor go to a darker place?

Obviously, in the Christmas special he meets his new chum or someone he thinks is his new chum. I think it’s just sort of a note for The Doctor that’s from someone who loves him very much saying, “Don’t be alone too long” because I think he gets more dangerous when he’s on his own. I think he needs that sort of human moral compass or that human sensibility. He needs that because he doesn’t have the same grasp on it.

I’m really interested by the time he spends on his own. I think as a character, it’s really interesting to think of him becoming quite reclusive and alone. Just this old man wandering around the universe trying to put things right, killing loads of innocent people along the way.

When you look at it, there’s a lot of clerics who die in certain episodes. Poor dudes. “Oh no, another one bites the dust.”

The five we’re dealing with, the overall arc is the fall of the Ponds and the end of an era. They are out of there. So that’s what we build towards.

And then, of course, the episodes that we are shooting now that will transmit next year after the Christmas special will deal with the arrival of Jenna-Louise Coleman, the new companion, and the subsequent adventures with The Doctor thereafter.

But up until “The Angels Take Manhattan,” which is great, it’s all about the Ponds.

When we last left The Doctor, he was dead to the universe, deciding to go back into the shadows. Does he stay underground this season?

We absolutely picked up where we left it. We touch base with a man who, as we said, is trying to step back a bit and be less prominent, less famous, less apparent, less destructive – less of all of those things that he started to struggle with. We see him trying to deal with that and I think absolutely as a character trait or personality or thing, whatever you want to call it, there’s absolutely something that he’s grappling with there.

Perhaps it does make his soul a little darker somehow because he is alone a lot more and as Amy says, it’s unhealthy for him I think ultimately for him to be alone too long.

You said the Daleks are scary again, how so?

Quite simply, I think we got the design of them better. And we’ve drawn on every single Dalek that’s was on it’s – you can’t say legs, can you? – on it’s space wheels. You’ll see tonight, the asylum is scary – the design of that, you’re in Dalekland. It’s like a sort of perfect theme park because everything’s made for Daleks. It’s ridiculous.

I think the story and the world in which they’re set is gruesome and frightening. But I think the design and just the way it’s lit and just the tone and the feel of the episode, I feel we’ve achieved our intention with their nature much better than we have previously, which I’m really thrilled about because the Daleks are important to Who.

I think it’s where you keep mad people, but I like the idea that some of them are so mad that they’re going, “Don’t let me up.” The interesting thing about the Daleks is I think perhaps if there was more of a human conscience there, the latter could apply to that. But the Daleks just don’t have that. It’s just alien evil encased in a tank.

That’s why The Doctor has had this lifelong war. That’s why they’re his greatest foe because there is nothing redemptive about them. They are only evil. And that’s the only way he sees them is pure evil.

But, you know, I think this is an interesting episode for the nature of the Daleks. We learn a lot about them. Steven [Moffat] cleverly reveals, as you sort of have to with every Who episode with a monster who comes back, they have to have moved on somehow, the monsters. I think Steven’s done that. He’s explored their nature in a very interesting way, I think.

We encounter someone’s feet. He was a king. I’m not going to give anything else away. It’s episode four of this season and he’s chasing us.

Who would I like to encounter? It’s like “What’s your favorite album?” I should have a few stock answers. I love Frank Sinatra, but I always say that. I want to say someone different. Was Tarzan real? He wasn’t real. I like the idea of The Doctor swinging from the branches with Tarzan, being really bad at it though. Tarzan, I think The Doctor should hang out with Tarzan for a bit.

You did some filming in New York this season. How is filming on location versus filming on set in Cardiff?

I want to film every single episode of Doctor Who in New York. I’d like to put that out there, BBC America. If anyone wants to make that happen, we are absolutely open to it. I love it. I absolutely love this place, I love this city. Anywhere you point the camera, there is something wonderful and beautiful to look at. The light here falls between the grids of the buildings so wonderfully.

I’ve made no secret of the fact that I’d like to come live here one day anyway on my own. It’s great to do a periody piece in New York, as well. The locations afford you so much. It was wonderful. We had a great time.

It was a wonderful experience for us as well because we filmed in Central Park and had hundreds of fans following us. It was remarkable. It was like nothing I’ve ever witnessed before. I would love to come back, absolutely.

[Editor’s Note – We were one of 10 people in a small roundtable discussion with Matt Smith. The questions above are a combination of those asked by HoboTrashcan and the other media members.]

Top photo and interview by Joel Murphy. Second photo taken by Gary He for BBC America. “Asylum of the Daleks” airs this Saturday at 9 p.m. on BBC America. Check back tomorrow for an interview with Karen Gillan.