The new season of Archer premiered two weeks ago on FX. The show is taking a huge detour from what we’re used to and surprisingly, it’s not a suckfest. I was concerned that leaving the spy agency aspect of the show would be a mistake, but it doesn’t feel forced and is just as hilarious as always.

The ensemble of characters in itself is amazing and the talent on that show is ridiculous, but if we’re picking people out, I’d say my two favorites are Pam and Krieger. The new direction the show is taking is giving a larger role to Pam, and I’m really excited to see more of her bad-assery.

So this week, I decided to make you guys a little Pam Poovey food to shove in your face holes. I was just going to just get a bunch of 40s and bear claws and photograph them, but you triflin bitches deserve better than that. So you’re getting Holy Shit Snacks and Green Russians. Be glad I stopped there, I could have made you all a steamin’ batch of cooch chili.

Just keep them away from the food rapists at your office. These aren’t supposed to be cream filled.

Unwrap the Ferrero Rocher candies and pulse in a food processor a few times until they are a bunch of small chunks.

Using a mixer, blend together nutella and butter. Add in powdered sugar, a half cup at a time.

Fold in candies with a spatula.

Roll mixture into little logs and place them on wax paper-lined cookie sheets.

Freeze for an hour.

When you’re ready to dip them: melt wax in a double boiler. Stir in chocolate. Heat over medium-low heat until the chocolate is melted.

Dip logs halfway into the chocolate. If desired, roll the dipped part in nuts. Return to the wax paper to set. (If your house is warm or humid, they may take longer to set. You can refrigerate them to speed up the process.)

Put all of the ingredients into a shaker full of ice. Shake. Serve up in a milk carton or a thermos or whatever the hell else you have lying around.

* To be completely honest, this tastes exactly like you’d expect it to – a milky licorice cocktail. You’ve been warned. 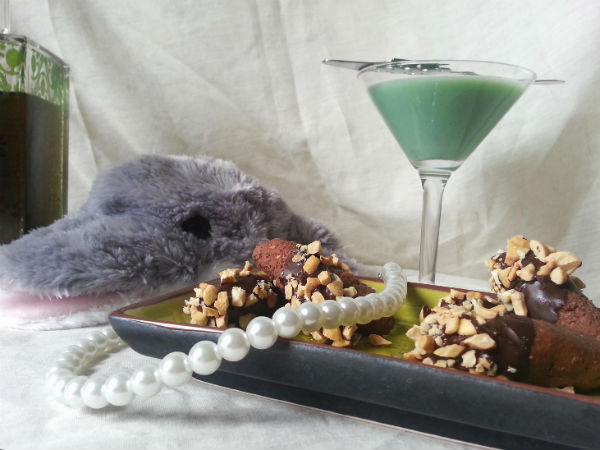