“We must all fear evil men, but there is another kind of evil that we must fear most, and that is the indifference of good men.”
– Monsignor, The Boondock Saints

The Boondock Saints doesn’t fit nicely into a single genre. Instead, it’s an amalgamation of a straight action flick, a dark comedy and a crime drama. It’s the story of fraternal twins in South Boston who become vigilantes and the FBI agent trying to track them down. It’s pretty safe to say that it’s unlike any other film you have ever seen.

It’s the story of the McManus brothers, Connor and Murphy, who, after quarreling with members of the Russian mafia, decide to become vigilantes who rid the world of evil. They are aided by their friend David Della Rocco, a package boy for the Italian mafia, who provides them with a hit list of bad guys. Trying to catch the McManus brothers is Paul Smecker, a sassy FBI agent played perfectly by Willem Dafoe. In addition to Smecker, the boys are being hunted by Il Duce, an unstoppable freelance hitman played by Billy Connolly.

The film has an incredibly strong cast. Sean Patrick Flanery and Norman Reedus do a great job playing the McManus brothers, David Della Rocco is excellent as David Della Rocco (a part that was written specifically for him, which is why the character shares his real name), Bob Marley (sadly, not Jamaican singer) offers some great comic relief as Detective Greenly and Billy Connolly is amazing as Il Duce. But the best performance by far is Willem Dafoe’s portrayal of Paul Smecker.

Paul Smecker is a truly memorable character and it’s hard to imagine anyone except Dafoe playing the role. He’s an incredibly intelligent and intuitive FBI agent with a low tolerance for stupidity. (All of his interactions with the moronic Detective Greenly are hysterical, especially when he shoots down Greenly’s “huge guy” and “serial crusher” theories). What’s most interesting about the character is the ethical dilemma he finds himself in – he believes what the McManus brothers are doing is necessary, but as an officer of the law, he is morally obligated to bring them to justice. Smecker is also a homosexual, but while he is certainly quite sassy, he’s far from a stereotypical Hollywood portrayal of a gay man. Smecker actually smacks his partner in the head and calls him a “fag” when he tries to cuddle and he gets kicked out of a gay bar for calling the bartender who cuts him off a “fairy fuck.” Much like Omar in The Wire, while the officers around Smecker seem to know he is gay, they respect him and fear his wrath enough not to make an issue out of it. Every scene that Smecker is in is a memorable one, although seeing Dafoe dressed as a woman at the end of the film is a memory you will most likely want to forget. (If you are wondering what crossdressing Dafoe looks like, picture the female Gremlin in Gremlins 2.)

One thing that writer/director Troy Duffy does that sets this film apart from most straight action films and crime dramas is he shows the McManus brothers heading to their victim’s location, then he cuts to the aftermath and shows Agent Smecker and the Boston Police Department investigating the crime. It’s only as Agent Smecker begins to unravel what happened that we see how things played out when the McManus brothers arrived on the scene. The best use of this concept is when Duffy shows the brothers’ first encounter with Il Duce. Duffy actually superimposes Agent Smecker pantomiming his version of what happened at the crime scene on top of the footage of the McManus brothers and Rocco squaring off with the hitman, which is a very memorable visual sequence.

The film was released with little fanfare in 1999, but eventually the movie gained a huge cult following on DVD. Thanks to the secondary success and strong DVD sales, Duffy is currently filming Boondock Saints 2 (though sadly, Willem Dafoe will not be returning for the sequel). Also, on February 10, the original film was released for the first time on Blu-ray.

Those of you who have seen the film on DVD will be surprised at how much brighter and more vibrant the picture looks on Blu-ray. While the picture still looks a bit grainy, overall the picture quality is much better than on the original DVD. The sound quality is also vastly improved.

The Blu-ray version comes with a host of extras, including two audio commentaries – one by writer/director Troy Duffy and one by actor Billy Connolly. There are also outtakes, deleted scenes and the original theatrical trailer (which is terrible and a very poor representation of the film, which may explain why the film didn’t do very well in theaters). Also, for those of you who want to reenact your favorite scenes, the disc includes the original script.

The Blu-ray release also includes two versions of the film – the original theatrical release and an extended director’s cut. In the wake of the Columbine shootings, the film’s release date was delayed and the film was heavily restricted by the MPAA due to its violent content. The director’s cut of the film includes all of the violent scenes that were original sanitized in the finished product. The only real difference is that the director’s cut features more blood splatter, and to be completely honest, it’s difficult to tell the difference between the two versions of the film. So, if blood splatter is your thing, then go for the director’s cut, but honestly you aren’t missing out on anything by sticking with the theatrical version of the film (which still has a body count of 33 and 246 utterances of the word “fuck”).

If you already own the film on DVD, you could probably be perfectly content with the DVD version of the film, but I still recommend picking it up on Blu-ray. If you’ve never seen The Boondock Saints or if you have seen it, but don’t own it, then I highly recommend picking up the Blu-ray version. 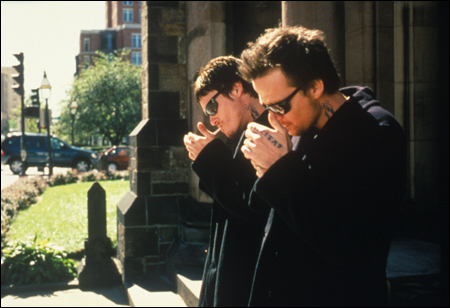 Written by Joel Murphy. The Boondock Saints is available now on Blu-ray.