While Pixar may be the king of animation these days (and Disney has now fully embraced computer animation with their fantastic film Bolt), it wasn’t long ago that the Walt Disney Company itself ruled animation with memorable stories and beautiful hand-drawn adventures. One of the last great hand-drawn Disney films was Lilo & Stitch, which was originally released in 2002 and is now being rereleased on DVD in a special two-disc “Big Wave Edition.”

Lilo & Stitch is the story of a genetically-engineered alien who was created by a mad scientist with the sole purpose of bringing destruction and chaos wherever he goes. The alien, referred to as Experiment 626, is exiled to a deserted asteroid and his creator, Jumba, is imprisoned for his work. However, since Experiment 626 has been bred to wreak havoc and since his creator gave him a host of superpowers, including superstength, intelligence and a resistance to bullets and fire, Experiment 626 is able to escape capture and flee to Earth.

The aliens originally want to just destroy Earth with Experiment 626 on it, but a historian on our planet convinces them that Earth must be spared because it is the natural habitat of an endangered species – the mosquito. So the aliens decide to strike a deal with the mad scientist who created Experiment 626 to bring him in in exchange for his own freedom. They send him to Earth along the Earth historian, Agent Pleakley. Knowing that they are on his trail, Experiment 626 decides to blend in and pretend to be a dog in order to get adopted by a family as a pet.

He is adopted by Lilo, a precocious Hawaiian child who is living with her sister after the death of her parents. Lilo is a free spirit who thinks a bit differently than her peers, which causes her to have problems fitting in, so her sister decides to get her a dog as a companion. Lilo is immediately drawn to Experiment 626, who she dubs Stitch.

Unfortunately, since Experiment 626 has been engineered to be an agent of chaos, he proves to be a handful. His antics couldn’t come at a worse time either, since Lilo’s sister Nani is being observed by the world’s most intimidating social worker, Cobra Bubbles, who doesn’t believe Nani is fit to raise Lilo. So Nani must prove herself to Cobra Bubbles while Lilo attempts to control her rambunctious pet, who is being tracked by two aliens. It’s certainly an original concept for a movie and one that works well.

The story is cute and, more importantly, it is well-written enough to keep the attention of any adult who sits down to watch the film with their children. It also had a nice nod to the Ugly Ducking, which adds some emotional weight to the film. Plus, parents should appreciate all of the references to Elvis Presley and all of his music featured in the film (Lilo claims that Elvis Presley was a model citizen – which is really a pretty funny claim – and has Stitch model his actions after the King). Fans of animation should also appreciate the look of the film, which is a bit different from any previous Disney animated feature. Stitch manages to be both ugly and cute at the same time and all of the human characters in the film have a fresh look from the standard Disney character models.

The “Big Wave Edition” of the film is packed with extras. Disc one includes audio commentary, a music video, several mini-games and hula lessons. It also includes a humorous feature called “A Stitch In Time,” which inserts Stitch into classic Disney films. However, the bulk of the special features are on the second disc of the DVD. The second disc has deleted scenes, the original pitch for the story, early sketches of Stitch and a whole lot more. But the most interesting extra is a two-hour documentary on the making of the film, which should be watched by any true fan of animation, since it is far more in-depth than your standard “making of” featurettes. 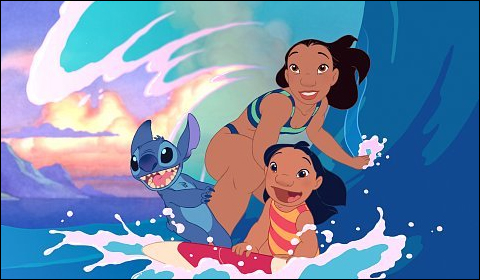