This week’s inductees into the “Overrated Hall of Fame” are … post-game comments.

A couple of Sundays ago, always interesting DeAngelo Hall of the Washington Redskins said in a post-game interview that the Skins “need to cut” him because of how poorly he had played that day. Of course, such refreshing honesty provided great fodder for talk show callers and talking heads, who all weighed in on the shocking candor of Hall’s statement. His off-the-cuff comment moments after a heartbreaking loss was dissected more than anything President Obama said that week.

This fan and reporter frenzy over any out-of-the-norm post-game comment goes on year-round regardless of the sport, and it’s about time we all just settle our asses down a bit when it comes to over-reacting to things that athletes say in that first half hour or so after a game.

Most sporting event are a few hours of ultra-competitiveness between the world’s greatest athletes, most of whom are some of the most competitive humans on the planet. (This does not, of course, include any Pittsburgh Pirates game.) Games often involve intense physical contact. Supreme mental and physical strength are required. Athletes exert themselves until they physically and emotionally spent. (Even Alex Ovechkin does this once or twice a week.) Bodies and health are put on the line, and in some sports, athletes actually risk their lives. (NHL skate blades are razor sharp, Major League fastballs move very fast and Tim Tebow believes in an angry, spiteful God who could smite him after a third interception.) They do all of this in front of thousands of live fans and millions of fat, Doritos-stained bastards watching on television.

Yet twenty minutes after a game, with an athlete’s adrenaline still in the red zone, with his body still covered in sweat and dirt, with the pain from the game pounding different parts of his spent body, a pasty, doughy collection of middle-aged reporters are thrusting recorders in his face, shouting questions about the events that just transpired on the field. These often involve the game’s key plays or an athlete’s failure to deliver at a crucial moment. The athlete has had no time to reflect or cool down, and now some judgmental jacknape from the Kansas City Star is asking accusatory questions about a dropped pass on fourth and six.

And when this athlete responds to a question with something other than the 27 textbook athlete platitudes, his comment goes through a week’s worth of intense analysis by the same people who bitch and whine about how most athletes never saying anything honest or genuine in an interview.

Now, I know that with the big money of pro sports comes the responsibility to be more media savvy and to respond to questions in a somewhat calm and polished manner. Most athletes do just that. But these guys are asked loaded questions night after night and week after week by reporters who can’t contain their drool as they imagine their pointed questions eliciting that controversial sound-bite answer that will make every Sportscenter broadcast for the next four days.

How diplomatic would any of us be if forced to endure a string of reporters’ questions at the end of each work day. Something tells me us workaday regular Joes and Josephines wouldn’t be so diplomatic every single day. Let’s imagine a few examples of how this might go.

Reporter: “Can you tell us why you handled that misbehaving student in a manner that just escalated the situation instead of defusing it, Mrs. Teacher?”

Teacher: “Because I was tired of that little fucknut’s bullshit, which he’s been pulling all goddamned year, that’s why!”

Reporter: “What went through your head immediately after you realized you had mis-measured and then had to tear down two hours of work, Mr. Carpenter?

Carpenter: “I was pissed the fuck off, what do you think? Christ, what a stupid-assed question.”

Porn Star: “Well, of course I find this act distasteful, to say the least, and I can only do this with a fellow actress who knows beforehand how we will end the scene, for we both know that our jobs entail acting out the largely unspoken fantasies of the average person, and that while these facial ejaculation scenes might titillate and excite viewers, most people never actually perform these acts in their real lives, so if I just look at from a sociological and workmanlike standpoint, and my scene partner agrees to this act in advance, I can live with what I do.”

(Okay, so maybe some regular people would know how to respond calmly and rationally to loaded questions.)

I’m not giving athletes a total pass on stupid or incendiary comments. If an athlete says something stupid or controversial in a planned, sit-down interview, we can be little less forgiving, as at that point he is no longer covered in post-game sweat and blood and still oozing competitive juices and adrenaline.

But when an athlete rips an opponent, coach or umpire or – bless you, DeAngelo Hall – himself right after a game, let’s just enjoy the juiciness of the quote and discuss it a bit the next day at our much more boring jobs, and then let it go. Let’s not declare the speaker of said quote to be a brainless, classless, tactless moron who is disrupting team chemistry or thinking only about himself or unable to control his emotions 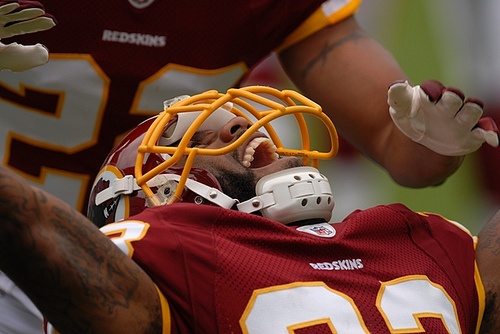 Hobo Radio 492 - People died in the 80s
Hobo Radio 467 - This podcast is a Tide ad
A Cinecle View - Freedom of Expression: The President is doing it wrong
Hobo Radio 287 - Crabtree!
Overrated - Star athletes being overpaid
Note to Self - Why your team won't win the Super Bowl 2012