One of Joss Whedon’s greatest strengths as a director is his ability to create a sense of grandeur in his work.

Whether it’s The CW’s Buffy the Vampire Slayer or Serenity, the theatrical adaptation of Whedon’s cult hit Firefly, the acclaimed writer/director finds a way to make things seem epic. And considering Marvel’s The Avengers is a big summer blockbuster that’s been teased ever since the closing credits of 2008’s Iron Man, Whedon is absolutely the right man to make this movie feel important and give it the larger than life feel that you would expect for a team up of “Earth’s mightiest heroes.”

To make a movie like this work takes more than grandeur though. You need to find a way to spotlight all of the individual superheroes while also advancing the plot and giving the audience a memorable villain and a handful of great battle sequences. Whedon is able to deliver on all of these fronts. The movie has a nearly two and a half hour running time, but none of it feels wasted and even the scenes that simply involve characters sitting around a table talking feature snappy dialogue and have enough tension or excitement running through them to keep things from ever getting boring.

Much of the story builds on things we’ve already seen in the previous Avenger character films. The film’s MacGuffin is The Tesseract, an energy cube that was prominently featured in Captain America and originated in Odin’s (Thor’s father) war room. The Avengers‘ villain also comes from a previous film – Loki, Thor’s trickster brother who disappeared into the abyss of space at the end of Thor. He returns with a kick ass new staff and an army of aliens looking to snag the Tesseract and take over Earth.

Of course, all of this is simply an excuse to create a conflict big enough to bring The Avengers together. What we all want to see is Iron Man, Captain America, Thor, The Incredible Hulk, Black Widow and Hawkeye team up to take on a set of worthy foes. And seeing the interactions between these different personas makes the film so much fun to watch. It’s a real joy to see Tony Stark (Robert Downey, Jr.) and Bruce Banner (Mark Ruffalo) bond over their love of science. Though it’s equally as fun to watch Thor (Chris Hemsworth) and The Hulk try to kick the crap out of each other. And Stark’s seemingly endless string of jokes at Steve Rogers’ (Chris Evans) expense provide consistent laughs throughout the film. Plus, there is actually a quite lovely and compelling backstory given for The Black Widow’s (Scarlett Johanssen) close relationship with Hawkeye (Jeremy Renner). 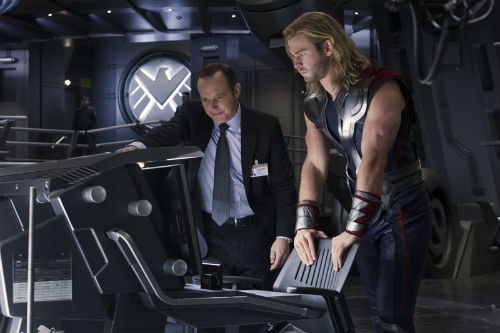 What’s also refreshing is that while all of the big stars are able to shine, there are also great moments in the film for minor characters like Agent Phil Coulson (Clark Gregg) and Agent Maria Hill (Cobie Smulders). And, of course, Samuel L. Jackson is given plenty of opportunity to shine as Nick Fury, director of S.H.I.E.L.D. It’s worth mentioning too that Mark Ruffalo, who made headlines when he replaced Ed Norton as The Hulk, gives the most compelling and nuanced portrayal of Bruce Banner I’ve ever seen. I hope he gets his own spinoff film so that they might finally get The Incredible Hulk right.

One of the other great things about Joss Whedon is that, unlike a lot of directors today, the man knows how to shoot an action sequences. I’ve complained at length about the modern tendency to use shaky handheld camerawork as a cheap means of conveying action, which typically leaves me feeling cold and slightly nauseous. Whedon doesn’t resort to those cheap tricks. All of his action scenes are clearly stages and easy to track with, which makes them so much more fun to watch. There’s a scene late in the film where he uses one continuous shot to go from hero to hero showing you how each one is faring in battle that is truly amazing to watch unfold.

There are only two things that kept this from being a perfect film. One is a few minor inconsistencies and plot holes in the writing that left me scratching my head, the biggest of which involved the dramatic shift in how much control Bruce Banner had of his faculties when he morphed into the Hulk. The other thing is the 3D element, which like many films was a complete waste of time. It added nothing to the film. The best thing I can say about it is that, unlike Thor which had poorly-lit battles with the Frost Giants that became incredibly difficult to see when converted, the 3D in no way detracts from the film. It just doesn’t add anything either.

Overall though, The Avengers is a fun, funny film that actually lives up to all of the hype surrounding it. Once again, Joss Whedon created a grand stage and delivered a memorable, epic story on it. And the teaser clip that rolls after the closing credits and the inevitable success this film will have hopefully means Whedon isn’t done filming stories featuring Earth’s mightiest heroes. 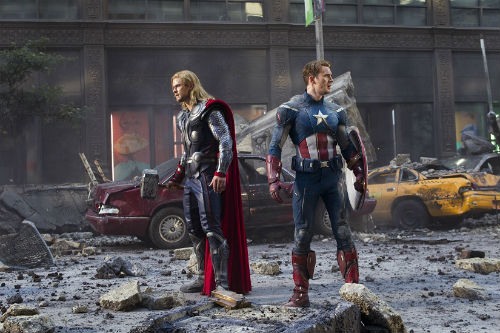