It was announced yesterday that CBS and 20th Century Fox Television have finalized a deal to bring back How I Met Your Mother back for a ninth and (hopefully) final season.

If you are like me, this isn’t good news. Personally, I’ve been hanging in there this season – putting up with a show that has become a shell of its former self – just because it seemed like we were finally close to the finish line. Long ago, I stopped caring about how Ted and the mother get together. I liked the other characters enough and liked the early seasons of the show enough that I’ve stuck with it in spite of the way they’ve squandered the show’s initial premise.

Rumblings of a ninth season have been out there for a while. It seemed like Jason Segel was the sticking point in the negotiations for the longest time. I found myself hoping that with his movie career, he’d refuse to re-sign no matter what. And that way, the show would come to an end at the conclusion of this season, culminating in Barney and Robin’s wedding and Ted’s first meeting of the mother. At this point in the show’s run, I figured that was their best chance to go out on a high note.

In a conference call earlier this week, show co-creator Craig Thomas promised we would still see Barney and Robin’s wedding on this year’s season finale on May 25, 2013.

“That will definitely happen. We are heading toward a set date,” Thomas says. “We set it on TV, and we will stick to it. We’ve been seeing glimpses of this wedding for like three years – we have to get there already, right?”

In my heart of hearts, I want to believe we’ll be spared of that. I think the best case scenario at this point is that they introduce the mother in episode one of season nine and just let her be a regular cast member for the remainder of the season. That would take some smart writing and really great casting for the mother, but it could easily be done.

Still, I have the sneaking suspicion the show will stick to the idea of having the mother’s introduction happen in the finale. And if that’s the case, we could be in for a painful final run (which yes, I’ll still watch because I’m an idiot).

So since I doubt Carter Bay and Craig Thomas have a plan in place yet for the ninth season, I figure I would do them a solid and offer a few suggestions of my own for how to string us along for one more season …

Scenario 1: Ted sits there at the train station, several paces away from the mother, who is clutching a yellow umbrella. Ted catches a glimpse of her and starts to say hello. She slowly turns to face him, the camera positioned so we can’t quite see her face.

Then, as she comes into frame, we see … that it isn’t the mother at all. It’s Robin in disguise. Ted catches her trying to leave the wedding because of nerves. He talks her into going back and marrying Barney.

She drops the umbrella. A mysterious woman picks it up. That woman spends the entire ninth season trying to track down the owner of the yellow umbrella.

Scenario 2: Ted sits there at the train station, several paces away from the mother, who is clutching a yellow umbrella. Ted catches a glimpse of her and starts to say hello. She slowly turns to face him, the camera positioned so we can’t quite see her face.

Then, as she comes into frame, we see … that it isn’t the mother at all. It’s a chimpanzee in ladies clothing. As we cut to Ted’s future kids rolling their eyes, Future Ted says, “Did I say mother? That was the story of how I met your monkey, Mr. Waffles.”

Ted spends the bulk of season nine dressing Mr. Waffles in hilarious outfits and using him as a surrogate for Marshal and Barney, who are too busy with their married lives to listen to Ted’s dating woes. At the end of the season, Ted feels like he must give up Mr. Waffles … and meets the mother, who is a local zookeeper.

Scenario 3: Ted sits there at the train station, several paces away from the mother, who is clutching a yellow umbrella. Ted catches a glimpse of her and starts to say hello. She slowly turns to face him, the camera positioned so we can’t quite see her face.

Then, as she comes into frame, we see … an unmarked van driving up. Masked men rush out and throw a bag over Ted’s head before tossing him into the van. They rush Ted off to the airport where he’s thrown into a cargo plane … and flown to South Korea.

It seems GNB has been doing shady dealings with the South Koreans. And Barney, the scamp, put Ted’s name on all of the paperwork. For the rest of the season, Ted is stuck in a Korean prison. He grows a crazy beard and must scrounge for food. Hilarity ensues as he corrects the grammar of his captors and requests Eggs Benedict, a cappuccino and a copy of the New York Times instead of the breakfast gruel he is served.

(We’ll have to wait and see if Bay and Thomas borrow any of these ideas. Scenario 1 seems the most plausible, though deep down I’m rooting for Mr. Waffles.) 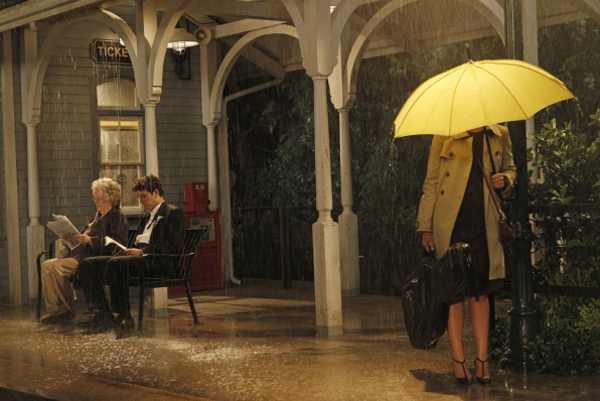