“I’m going to go ahead and guess that one of the issues here is your need to say that a person is exactly anything.”

In many ways, Orange Is the New Black feels like the spiritual successor to creator Jenji Kohan’s last show, Weeds. Both shows feature a white, cultured, attractive female protagonist caught up in the drug trade. Both have a quirky Jewish love interest for the lead. Both have catchy theme songs (Orange Is the New Black‘s is an original song by the amazing Regina Spektor). There are even some familiar faces from Weeds that show up as reoccurring characters, like Natasha Lyonne, Michael Harney, Pablo Schreiber and Matt Peters. But Orange Is the New Black isn’t Weeds. It doesn’t try to be. And, though its a bit premature to say this with only one season under its belt, I think it has potential to be something even better.

The series is based on Piper Kerman’s 2010 memoir of the same name. Like Kerman, the protagonist in the show, Piper Chapman (Taylor Schilling), is sent to federal prison for her brief involvement in a drug trafficking ring years earlier. Chapman is engaged to Larry Bloom (Jason Biggs) and is in the midst of launching a boutique soap making business when her past crime finally catches up with her. And, to make matters worse, her ex-girlfriend heroin dealer Alex Vause (Laura Prepon), the one who convinced her to smuggle the fateful bag of drug money through an airport, is locked up with her.

It’s an intriguing premise and one Kohan could have run with to make another Nancy Botwin-esque story about a well-meaning, but dangerous white girl who leaves a trail of destruction in her wake as she navigates various minefields. But instead, Kohan decided to do something better. She made Orange Is the New Black an ensemble show. Instead of just focusing on Chapman, she opens the show up to the colorful and diverse cast that populates the prison and, in doing so, gives her viewers a far more dynamic and compelling show.

“In a lot of ways, Piper was our gateway drug,” Kohan told Entertainment Weekly in a recent interview. “We wanted to write stories about all sorts of women and their experiences. But it’s very hard to sell a show about women of different colors and different ages and different socioeconomic backgrounds. This way, we almost get to sneak in these amazing characters and amazing stories through this white girl going to prison. With each episode we explore a different character.” 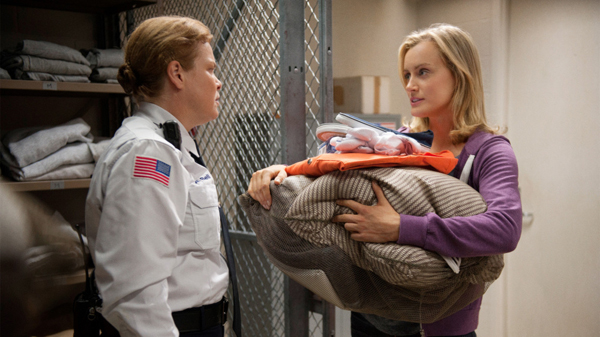 The show adopts a similar narrative structure to season one of Lost. Each of the 13 episodes focuses on a different inmate, giving the viewers a series of flashbacks to show how that prisoner ended up behind bars and a parallel storyline inside the prison. This helps to mix things up, embedding the viewer deeper and deeper into the prison world so that you understand who these people are and how they operate. And Kohan and her writing staff have come up with a great cast of characters to populate the prison. And they found a team of amazingly talented women to bring these characters to life.

There’s Galina ‘Red’ Reznikov, the intense, but surprisingly sensitive Russian cook played brilliantly by Kate Mulgrew. There’s also Miss Claudette Pelage (Michelle Hurst), a long-incarcerated inmate who never receives visitors or mail, who the other prisoners fear and spread rumors about. And there’s Sophia Burset (Laverne Cox), the transsexual woman who has a wife and a young son struggling to deal with her sex change operation and incarceration. Natasha Lyonne, who has struggled with drug addiction in her own life, turns in a captivating performance as the rebellious drug addict Nicky Nichols.

What’s most interesting about the show is how your perception of characters changes as the season progresses. As you get to know characters more or see different sides of them, your sympathies change. There aren’t many truly villainous characters on the show. Everyone is presented in shades of gray. Even an inmate nicknamed “Crazy Eyes” (Uzo Aduba) turns out to be a much more dynamic and likable character than you’d first imagine. And thanks to a wonderfully complex performance by Prepon, Alex Vause turns out to be a very conflicted and sympathetic character who isn’t quite the calculating, bad ass heroin importer she initially seems to be.

With such a rich and deep ensemble, at times Chapman comes across as the least interesting character in the show, especially early on. She makes some huge gaffes in the first few episodes that, even by privileged white girl in prison standards, make you roll your eyes. But ultimately, I really enjoyed her arc on the show. Where she ends up is a very different place from where she begins the season. And where Chapman lands in the finale left me very excited about season two (which Netflix has already green-lit).

I do wonder about the long-term prospects of the show. Chapman is only sentenced to 14 months behind bars, so theoretically there is a small window of time for the show to operate within. And while I enjoyed Weeds overall, it definitely felt like a series that overstayed its welcome. But, even with that in mind, I’d say I’m cautiously optimistic about this show going forward.

If you haven’t already binged-watched season one, which was released in its entirety last Thursday, I definitely recommend giving it a shot. It’s a surprisingly addictive series that I found myself going through at a record pace. Netflix is quickly establishing itself as a new powerhouse in quality television programming in the same league as FX, HBO and AMC. I’m excited to see what the online streaming company, and what Orange Is the New Black, have in store for us next. 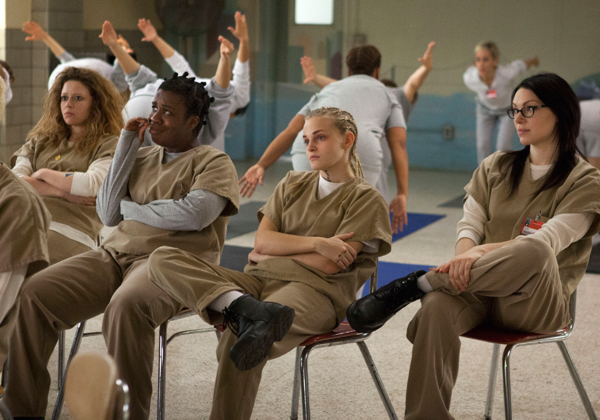 Written by Joel Murphy. If you enjoy his recaps, he also writes a weekly pop culture column called Murphy’s Law, which you can find here. Follow Joel on Twitter @FreeMisterClark or email him at murphyslaw@hobotrashcan.com.