I’m usually the last person in the world who cares about romantic plotlines in action stories. At best, they tend to feel superfluous and at worst they become a needless distraction, taking up precious time that could be used to show the hero roundhouse kicking some jerk’s face.

But watching 24: Live Another Day, I can’t help but notice that the writers are aggressively avoiding having any happy couples. They seem to be going out of their way to show us that every romantic relationship on the show is in some way toxic. And I’m starting to wonder if the writers didn’t all go through traumatic break ups before they started working on the series.

Don’t believe me? Let’s take a closer look at the couples we’ve been presented with thus far.

First, there’s Audrey and her husband, Chief of Staff Mark Boudreau. How bad are things between these two? Audrey was tortured by the Chinese and left in a catatonic state because of her relationship with Jack Bauer and yet Jack still seems like a better boyfriend than Mark. Mark is weaselly and manipulative and dangerously overprotective. And there is nothing romantic about their relationship. He is clearly just the guy who rescued her from her mental break, but now feels like she owes him for it. The fact that Audrey was so willing to write him off as a monster for helping her dad turn himself over to Margot Al-Harazi, yet applauded Jack for his role in the operation, speaks volumes to where their marriage is at. And she hasn’t even found out that he tried to turn Jack over to the Russians yet. When she does, I have to imagine she ditches him and throws herself at Jack.

Speaking of Margot Al-Harazi, her daughter Simone had an even more twisted relationship than Audrey and Mark. Because of her evil mother, Margot was forced to sleep with other men to aid their terrorist mission. And Margot had Simone manipulating Naveed in order to keep him on task. When that didn’t work, Margot chopped her daughter’s finger off. You hear stories about terrible mother-in-laws, but this one has them all beat.

Then there’s poor, sweet, newly-gothed up Chloe O’Brian. Not only do we discover that her husband Morris and their son Prescott were killed in what was made to look like a car accident, but at the end of this week’s episode, we also discover that she’s now dating Adrian Cross, who is clearly positioned to be the series’ villain after Margot took a tumble out of that moon doo … I mean, hotel window.

Speaking of dead spouses, there’s three more widowed heroes – Jack Bauer, James Heller and Kate Morgan. Jack’s wife was, of course, murdered in season one. Heller has had two different wives die on him. And Kate’s husband was accused of selling secrets and committed suicide (allegedly – I’m not convinced he wasn’t set up, but that’s a whole different discussion), which not only broke Kate emotionally, it also sabotaged her career.

Also, let’s not forget the “Yorkshire Widow” Margot Al-Harazi, whose second husband was Al-Qaeda commander Mahmoud Al-Harazi. His death by a U.S. drone strike is her entire motivation for orchestrating this series of attacks.

I know this is a dark show, but with every character having either a dead spouse or a loveless marriage, at this point I could use at least one scene of a happy couple kissing or simply enjoying each other’s company. These characters live in a world that is constantly under the threat of terrorists attacks and, thanks to a shockingly high number of moles and double agents, Jack Bauer is the only person who can save them, yet inexplicably bureaucrats try to stop him from doing his job at every turn. It’s a chaotic and scary world they inhabit. It would be nice if they at least had someone to go home to at the end of the day who could spoon them while watching old episodes of 30 Rock.

So come on writers. Just show me Prime Minister Alastair Davies kissing his wife on the cheek or Lieutenant Chris Tanner, the drone pilot accused of attacking his fellow soldiers before they figured out the system was hacked, going home after a terrible day to find his adorable wife and smiling children waiting for him with a warm meal and amusing stories about their days. Hell, at this point, I’ll even settle for that son of a bitch Navarro, who clearly is wearing a wedding ring, being embraced by his sweet, but equally corrupt wife as they both take the override device to Cross.

Throw us a bone, 24 writers. And maybe whoever it is that hurt you will see that you changed and will come crawling back. If your show’s taught me anything, it’s that there’s still time. 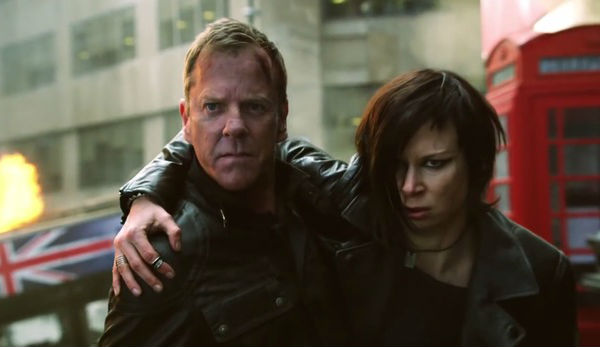