Some of you may remember that, at the time, I wrote a tribute to him. To be honest, I don’t remember much about writing it. At that point, I was completely in shock.

I’m not sure what compelled me to sit down and compose the tribute. I know it was written late at night when I should have been sleeping, since the next day I got in a car and drove from Maryland to Asheville, North Carolina to be close by as my mom and grandmother made funeral arrangements. Honestly, I think I just needed something – anything – to pass the time.

Looking back on it now, I’m impressed with how coherent it is. There’s a lot of solid biographical information in it and at least some small sense of the impact he had on my life. It’s nice to know that at a time when my brain was on autopilot and it felt like the world was crumbling around me that I could still string together a serviceable obituary.

I never, for a moment, thought he was going to die that day. I knew he was going in for surgery, but it was a minor procedure to repair a leaky heart valve. Heart surgery, sure, but the kind you are home from a day or two later. The surgeon botched it, which is why he isn’t here today. It was a mistake. A very cruel, unfixable mistake.

I had meant to call him before the surgery. As the members of my family know, I’m not the best at calling to check in. I didn’t think it was a big deal. I figured I’d call him after. He’d probably make me laugh by venting about how inefficiently the hospital was being run. He’d no doubt have a few ideas on how to fix it.

Instead I sent him an email that morning from my work computer. The tone was nonchalant. It was just me checking in. Something he’d see later to know I had been thinking about it.

It wasn’t until later that day that I actually felt scared for the first time. My mom called to update me, letting me know there had been a complication. I remember sitting in the break room at my job, staring at the brick wall, silently praying for God to heal my grandfather. Those prayer were not answered.

Later that night, I found out he died. It still didn’t seem possible. When my mom broke the news to me over the phone, I was stoic. I kept my composure afterwards as I called my boss and left a voicemail, explaining I would need to take some time off because my grandfather had passed away. It was the first time I said the words out loud. They stung in the back of my throat.

I quickly hung the phone up and tossed it down in front of me. Then I broke down sobbing. For a long time. Ugly, uncontrollable crying.

The funeral was a haze. As was the second funeral, much, much later, when he was finally laid to rest in Arlington National Cemetery. Honestly, the next year was a haze. I ended up moving to Boston the following December to live with a girl I hardly knew. I needed a change of scenery, something to shake me out of my funk. I needed a distraction from the grief.

I remember one night a few months after he died that I had a dream we were wandering through the woods together. Some horses had escaped from their enclosure and were running free. It was up to us to round them up. I’m sure any armchair psychiatrist reading this could have a field day with what all of those symbols mean. To me, it was just nice to be with him again. Until I woke up the next morning and the dream haze wore off. That’s when it hit me, all over again, that he was dead.

It got better, eventually. But “better” is relative. Ten years later, I’m still not over it. It still hurts. The loss looms heavy in my life. I’m reminded of him constantly. I often wonder what he’d think about milestones in my life or the person I’ve become. I talk to Molly about him all the time. Molly, my fiancé, who never got to meet him.

Before we left for Los Angeles, we took a trip to Arlington with my mom to visit his grave. As I always do, I asked for a moment alone. I talked to the headstone, telling my grandfather that I missed him and catching him up on our big move. As much as I want to, I don’t really believe he can hear me. It’s just … I have some many things I want to say to him. And nowhere else for those words to go.

In a sense, he’s not really gone. I do believe that we live on in the hearts and minds of the people who love us. Or occasionally, in their dreams. But in another, more real sense – he is gone. It may hurt less now than it did back then, butit still hurts.

Unfortunately, I imagine it still will in another 10 years. 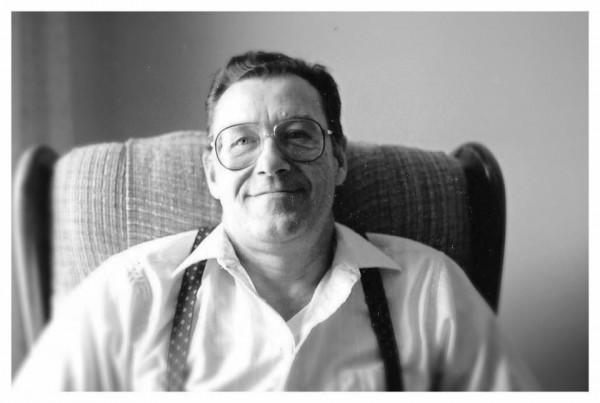