It might not be released until next March, but the Bob’s Burgers Burger Book: Real Recipes for Joke Burgers has had a lot of buzz. Not only do I want it, but I also want to have written it. I’ve made four of the burgers from the show myself and had a blast doing it. It’s one of my favorite things on television and it’s heavily steeped in food and food puns. However, jealousy aside, I decided to move on.

The new season is starting next month and I can’t let it pass by without a recipe. But I’m sure as hell not doing a burger recipe. It’s been done. 75 times. In a book. So I start thinking of what I can make and it hits me … but like, gently. It brushes me. I want to make that thing from my favorite episode. Obvi.

But wait, Fontina … your favorite episode is a Christmas episode. Won’t the Internet get really mad at you for mentioning that in August? Why yes, yes it will. Maybe I’ll write it a nice letter explaining the situation. Maybe it will understand.

I want to make a theme recipe for that show Bob’s Burgers that you love so much. You know, the one with all of your favorite actors doing guest voices and Loren Bouchard just rocking at life? Yeah, that’s the one.

You see, there’s this really well-written episode called “Christmas in the Car.” It has some great lines and some great deliveries. Kristen Schaal really shines in that episode. And it guest stars Bobcat Goldthwait. How can you not love him in a voice role?

Okay, okay, Internet. I hear you. It’s Christmas. But just because I’m writing this column in August does not grant you leave to start complaining about “Christmas sneaking up earlier and earlier each year” and “just let us have summer”.

That’s the other thing, Internet. Not everyone loves summer. I’m a snow bunny in my heart. I look forward to winter and fires in the fireplace. But if I ever dare to mention those outside of the confines of December, I get my ass handed to me on a tweet platter. But have I ever once shamed you for posting a beach picture in the middle of January when you feel like you’re dying inside?

Think of it this way.

Just because someone is excited for pumpkin spice lattes in August or puts up their Christmas tree the day after Halloween doesn’t mean the world is going to end. It doesn’t mean you need to take to social media to cast them out as a seasonal criminal. Because … brace yourself … it doesn’t affect you. Even if it did, because you have to read the words “peppermint mocha” and it makes your skin crawl … it is making someone else happy. So is it really so bad?

So I ask of you, Internet … please allow me to post a recipe based on something Christmasey for the premiere of Bob’s Burgers. Please take a deep breath and chill the hell out. Because if you don’t want to eat it … you don’t have to. And it makes me happy.

Whew. Hopefully that does the trick. (It won’t.)

In the show, Linda puts her Christmas tree up the day after Halloween. It dies. They have to go get a new one on Christmas Eve … hence, “Christmas in the Car.” On the way home they stop at a diner and order a Dutch Baby. It’s a world-famous high rise pancake, if you didn’t know. It’s supposed to take 25 minutes to come out, but there’s comes out a little early and Linda exclaims “It’s a preemie, just like Jesus.”

Linda gives Bobcat the container and says, “You ever have a Dutch Baby? Put that in your mouth, Merry Christmas.”

Bobcat says, “This is really good, you can’t even taste the baby.”   That’s it guys. That won me over. I’ve been wanting to make a Dutch Baby ever since. Also, I did. Then I made another one later that night. Because it is really good. And you can only taste the baby a little. I never need to make regular pancakes again.

So much like Linda, I’m putting up Christmas a little early. But my recipe won’t die like her tree did. It’s too damn good. 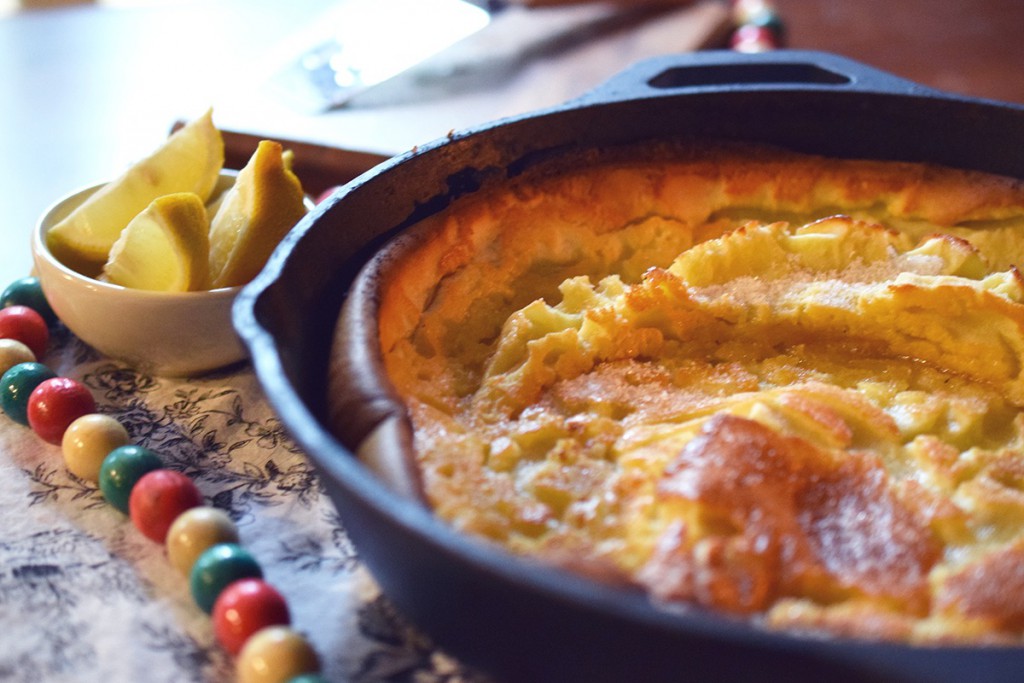