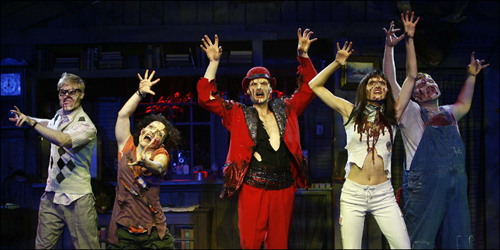 True fans of the Evil Dead franchise have seen Ash wrestle with his own hand or exclaim “This is my boom stick” hundreds of times, but they’ve never seen him spontaneously break into song … until now.

Following in the tradition of “Spamalot” and “The Producers,” “Evil Dead: The Musical,” which is currently playing at New World Stages in New York City, takes the franchise made famous by Sam Raimi and Bruce Campbell and sets it to music.

The story, which combines elements from both Evil Dead movies, centers around five friends who spend the night at an abandoned cabin in the woods and unwittingly unleash a pack of Candarian demons using the Necronomicon, or “Book of the Dead.” One by one, all five are possessed by these demons and it’s left up to the hero, Ashley J. “Ash” Williams, to defeat the demons. He receives help from Annie, the daughter of the man who originally lived in the cabin, who arrives at the cabin with her boyfriend Ed and a local hillbilly named Jake.

While the first Evil Dead film was more of a true horror film, the sequel injected a lot of humor and slapstick into the franchise. “Evil Dead: The Musical” takes the concept a step further, acting as almost a parody of the films by using inside jokes about Raimi and Campbell and by openly acknowledging plot elements that didn’t necessarily make sense. And, of course, there are the musical numbers, which include Annie singing “All the men in my life keep getting killed by Candarian demons” and Jake and Annie giving an “Ode to an Accidental Stabbing.”

Deadites from across the country will surely flock to New York to experience their favorite films in a brand new way. Evil Dead fan Ryan Ward came all the way from Winnipeg, Manitoba Canada for the show. Of course, Ward had a good reason to make the trip – he stars as Ash in the play.

Ward’s involvement in the project began three years ago in Toronto. “I was still in school at the time,” Ward said. “I was trying to get some acting work in the summer in Toronto. I saw a flyer and said, ‘Oh, Evil Dead. I love Evil Dead.’ ”

Ward didn’t exactly have high expectations for the project going in. “I figured it would be a bunch of guys putting it on who were just Evil Dead dorks. I was pretty sure it wouldn’t be any good.”

Still, being an “Evil Dead dork” himself, Ward went in and tried out for the show. “I didn’t think I’d get to play Ash, I figured I’d play ‘Wiseman’ or some small character.”

But, he believes his knowledge and respect for the film helped him win the lead role. “I think I was really the only guy who tried out who kind of understood what Ash should be,” Ward said. “After I read ‘boom stick’ they jumped up and cheered.”

Ward was cast in the lead role and was actually able to give creative input as the show evolved and was refined over time. Through trial and error the show was eventually tightened up and, due to its success in Canada, was brought to New York City. Ward was the only original cast member kept on when the project moved to the U.S., most likely because of his ability to truly capture the essence of the role and his resemblance to Bruce Campbell.

When he tried out for the play, he didn’t think he looked much like Campbell, but most people who see the show see a striking resemblance between the two.

“I think I look a bit like Bruce Campbell. I have dark features and I’m tall. I’m sure I’m not as big as Bruce Campbell was,” Ward said, “I think it’s more the facial expressions.”

After studying the films, Ward was able to effortlessly recreate the trademark eyebrow arching and facial expressions, but he also has tried to establish a delicate balance between simply mimicking the role that Campbell made famous and giving the character his own interpretation.

“I wanted to make it half my own thing, but I knew what was expected of me,” Ward revealed. “I tried to get the right bits of what Bruce Campbell did to try to satisfy people who liked Evil Dead because I know what I would want to see if I watched the play.”

Ward has also been able to recreate some of the famous physical comedy bits from the films, including smashing bottles over his head and wrestling with his hand before chopping it off. Ward has always been comfortable with physical comedy, citing John Ritter and Jim Carrey as inspiration. He was also able to draw from a one man show he wrote and performed called “Noctürnal Müsical,” which centered around a man trapped in his own dream whose alter ego is trying to kill him.

While recreating the physical aspects and mannerisms of Campbell were important, Ward knew there was one thing he absolutely had to know by heart.

“My biggest concern is: don’t screw up the important lines,” said Ward. “I know that everybody in the theater is probably saying them with me.”

Of course, he has screwed up the important lines from time to time, including the famous ‘boom stick’ line. However, fans of the franchise have still embraced him and he has received a lot of praise in the role, include praise from Bruce Campbell’s wife.

Campbell and his wife attended the show on the first two nights. After the show, Campbell’s wife told Ward, “It was so weird sitting next to Bruce because I was looking at you playing Ash and it looked like Bruce 20 years ago.”

Campbell himself was also impressed with the show. “He really liked the show, he thought it was funny,” Ward said. “I was a little bit nervous. I was keeping my eye on him. I was trying to see if he liked it or if he was bored.”

Renée Klapmeyer, who plays both Annie and Shelly in the show, really enjoyed Campbell’s presence. “It was awesome having him there, just knowing he was out in the audience and hoping that we were all representing something that he did that was close to his heart,” Klapmeyer said.

Klapmeyer, who is originally from Stillwell, Kansas, wasn’t familiar with the Evil Dead franchise when she began working on the play, but has since become a fan. “I had never heard of Evil Dead. I didn’t know anything about the movies,” Klapmeyer admitted. “I just saw the audition and it said, ‘Come prepared with your best horror scream.'”

Like Ward, when she landed the role she watched the films to help develop her two characters, but found that the musical had changed them quite a bit.

“The character of Shelly in the movie is really different from the character I play in the show. They’ve expanded it,” Klapmeyer. “The role of Annie is different as well. So, I definitely watched the movies and studied the movies a lot, but I also tried to bring my own creativity to the role.”

Nonetheless, Klapmeyer has developed a real appreciation for the movies and their fans. “It’s just been so amazing. I’ve never done a show like this before where the audience is so involved,” she said. “Everyone seems to enjoy it so much. They love what we are doing up there, which makes it that much more exciting.”

Of course, one of the things the fans really love is Shelly’s breakaway costume. Throughout the show, pieces of her outfit are ripped off, leaving her scantily clad by the final curtain. “I’ve actually never played a part before where I’m ripping off articles of clothing. It’s fun,” Klapmeyer said. “It’s more fun when the audience is in to it and they’re screaming and yelling as I’m taking off the articles of clothing.”

One aspect Ward and Klapmeyer might not enjoy is the copious amounts of blood that end up filling the stage by the end of the night. Much like a Gallagher show, “Evil Dead: the Musical” actually has a “Splatter Zone” in the front rows, where some audience members try to hide behind plastic ponchos to stay clean while others wear white t-shirts that they keep as blood-soaked souvenirs.

Starting out, the blood was a bit of a challenge for Ward and the creative team from Toronto. “It was a pretty steep learning curve when we first did it. We didn’t really know what to expect,” Ward said. “They used Super Soakers. I was soaked in blood and we didn’t have any wash basins or anything like that or any real clue how we were going to get it off in time for me to get back on.”

Over time, they were able to develop a better “blood-delivery system” and Ward was able to adjust to the splatter. “I’ve learned how to dodge the blood so it doesn’t hit my mic,” Ward said. And the blood really doesn’t bother him anymore. “I’m kind of used to it,” he said.

Sometime though, the blood can actually be dangerous for the performers. “We have the huge blood fight, then we still have one more number,” said Klapmeyer. “That’s very challenging for all of us because there is blood all over the stage. A couple of cast members have actually slipped on the blood and fallen.”

Still, the blood, the rabid fans and the cheesy musical numbers help to make “Evil Dead: The Musical” a unique experience.

“It’s unlike any theater show you’ve ever been to,” Ward said. “One word I would describe it as is ‘raucous.’ It’s like a rock concert.”

“From the minute I did it, I knew it was something special,” he added. “I challenge you not to have a good time at this show.”

Klapmeyer agreed, “It’s the kind of show that you leave all of your inhibitions at the door and walk in and just say, ‘I’m going to have a really good time’ and just go with it because the ride that we take the audience on is a crazy ride, but it’s a lot of fun.”

Written by Joel Murphy, November 2006. Photos by Carol Rosegg. For more information on “Evil Dead: The Musical” or to purchase tickets, visit the official website. To read our interview with Bruce Campbell, click here.