The original Evil Dead was made by a group of friends on a shoestring budget. It spawned a franchise that included two subsequent films and a musical adaptation and it launched the careers of the director (Sam Raimi) and the star (Bruce Campbell).

That original film is 30 years old. And, since it was made on a tight budget, it doesn’t have the best special effects or production values. So there is certainly room for a remake to come along and improve on the original on a technical level while still capturing the part of the story that fans of the cult classic have latched onto for all these years.

Unfortunately, this is not that remake.

While Evil Dead certainly improves on the visual effects and overall technical proficiency of the original, it serves up a storyline that is so muddled and off the mark that it squanders all of its potential.

The film starts with a familiar premise – a group of young, attractive friends head off to a remote cabin in the woods. One of them finds a mysterious book in the basement of the cabin and accidentally unleashes an evil spirit on all of them. Chaos ensues.

One potentially intriguing wrinkle the film adds is that one of the main characters, Mia (Jane Levy), is trying to kick a heroin addiction. She is the first one to be possessed by the evil spirit, so initially her friends just chalk up her bizarre behavior to her detoxing and wanting a fix.

It’s a clever conceit and one I wish the film had explored further. There are clear parallels to be made between fighting addiction and fighting off an evil spirit. And it gives the other characters a built-in reason to act in the clueless, reckless way that characters tend to act in horror movies, since there is a (semi-)plausible explanation for Mia behaving completely out of character.

Sadly, it abandons that idea fairly quickly and instead settles into a fairly standard and not particularly well-written horror film. None of the characters are memorable enough or compelling enough to garner your sympathy and their inevitable deaths aren’t particularly inventive enough or shocking enough to make you care either.

The plot is ridiculously convoluted and the ending makes little sense from a logical standpoint. But even worse than that, the film lacks any of the trademark wittiness or fun that the original series of films had in spades. The Sam Raimi Evil Dead films always felt tongue-in-cheek (especially the two sequels), but this film just seems vulgar and overly serious.

It does have some great special effects though. The characters, when they get possessed, look truly creepy and disturbing. And there are a few gory moments that horror fans will enjoy on a visceral level.

Fede Alvarez shows that visually he is quite an effective director. He comes up with some really inventive shots early in the film and the whole thing is beautiful to look at and well-composed, even if the story that unfolds is a mess.

The story is just too hard to get past though. And Alvarez is the first-billed writer on the film, so along with the credit he takes for the film’s visual accomplishments, he also has to take the lion’s share of the blame.

The other credited screenwriters are Rodo Sayagues and Diablo Cody. Cody has shown she has real writing chops with Juno and her Showtime series United States of Tara, so I’m wondering how much of her version of the script actually made it onto the screen since it lacks the trademark charm and snappy dialogue her work is known for.

It’s a shame too. Cody’s style of writing could have been an interesting way to re-energize and reintroduce the franchise to a new generation. Instead, what moviegoers are left with is a visually-stunning, but poorly-executed film that pales in comparison to the original low-budget Evil Dead. 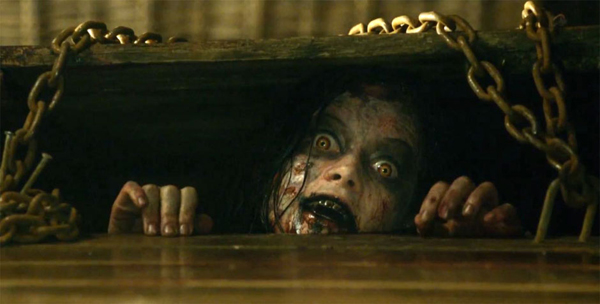