This episode embodies absolutely everything I love about Lost: the mythology, the action, the characters, the history … the mystery. Locke is right back where he belongs as the promised protector of the island, and things are about to get real heated with a psychotic mercenary about to torch everything like Sherman marching to the sea.

This week, to prove that I’m suffering the symptoms of the episode’s title (I’ve been pulling late, late hours at the office), I thought it would be fun to distill all the action and detail of this episode into complete pictorial form. Why? Because I can and because you like it. Enjoy.

Yup, my brain still hurts. We’re not going to pick apart too much this week, but there are some very important developments that simply cannot be ignored. Let’s get the easier ones out of the way before we dive into transdimensional quantum shifting and the Casimir effect. 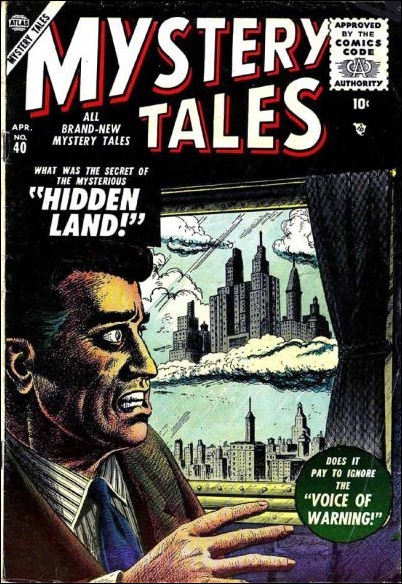 Many of you have probably already seen this comic cover since it’s plastered all over the Internet like Paris Hilton’s, err, assets, but I thought it would be good to include just in case. This issue, of course, is one of the six items that Richard Alpert brings to young Locke’s house in the flashback. Obviously, the knife was the wrong choice, but was this comic the right one? Perhaps it was the Book of Laws that seemed to be printed just after the Gutenberg Bible?

At any rate, the cover is fascinating since the man who spies the “Hidden Land” in the clouds appears to be looking out the window of an airplane. I’ve scoured the net for a scanned copy of the comic, but I came up empty. All I know for sure is that the “Hidden Land” story is only about four pages long, so it’s doubtful that much of it has anything to do with the Lost mythos. Still, I’m curious as hell. Copies of it are selling on eBay now for an average about $120, so I don’t think I’ll be splurging anytime soon. If anyone out there happens to have a copy or has seen its inside pages floating about the ether, let me know, will you? I’ve got a cookie with your name on it.

THE FAMILY SHEPHARD
So, we finally know not only that it was Christian inside the cabin when Hurley went a-spying earlier this season, but also what Christian is doing in there – speaking for Jacob. At least that’s what he’s telling Locke, anyway. Not only was Christian getting all comfy in Horace’s scratch-built cabin, but his fair daughter was chilling there, as well. Was it just me, or did Claire seem to be in on the joke? She had that cat-that-ate-the-canary grin on her face the entire time, as if she was reveling in knowing the whole story while Locke was still digging it all up clue by painful clue.

The main question on my mind is if Christian is dead or alive. Obviously, if he’s alive, he’s been keeping pretty quiet for the past few months while his son and his daughter dodged kidnapping and murder attempts. As I’ve mentioned before, I’ve felt for quite some time now that Christian has been to the island before and has just been trying to get back for much of his life. The flash forwards with Jack have reaffirmed that assumption since Jack has now taken the same alcoholic and drug-addled path of his father. It would explain why Christian took so many trips overseas, besides the obvious reason of wanting to see his daughter in Australia. In last season’s finale, Jack tells Kate that he’s been using the “golden ticket” to travel overseas as much as he can, hoping upon hope to get back. Perhaps this is what Christian was attempting for so long.

So, in the end, was he really dead when Jack found him? And, if so, was he somehow resurrected on the island? Another theory that keeps rattling around in my nogging is that dog-tired twin theory from a couple seasons back. I still think that could have merit, but not in the traditional sense. The Christian on the island could actually be a Christian from an earlier timeline, representing his younger self and the time he spent on the island. When he finally gets off the island, he returns at an earlier time in the outside world, and scrambles desperately to get back. Also, since he obviously got to spend some quality time with Claire, he made frequent trips to Australia, trying to reconnect with the daughter he both never and always knew.

Just something to think about.

AND NOW, FOR THE MAIN EVENT
First, before we fall deep into the rabbit hole, I have an orientation film I need you to watch. Some of you have seen the teaser to season four and scientist Marvin Candle’s introduction to the “Orchid” station, but if you haven’t you really need to see it to understand how things are really coming together.

All caught up? Okay, great. Let’s go over the main parts of the film and how it relates to where we are so far on the island.

The first thing you’ll notice is the number on the bunny. If you’ll remember waaaay back in the first arc of the season three, Ben uses a rabbit with the number eight marked in its side to convince Sawyer that he was implanted with a pacemaker that would stop his heart. This rabbit is obviously of the same stock that was used in experiments in the Orchid station. This places the Orchid station on the same island in the chain as the Hydra biological station.

Next, Marvin Candle (or at least that’s what he was called in the Swan orientation video) introduces himself as “Edgar Halliwax.” That name might ring a bell to some of you with minds like a steel trap. It’s the same last name that is stitched on the parka that Ben is wearing when he finds himself in the Sahara desert two episodes back. Here, take a look: 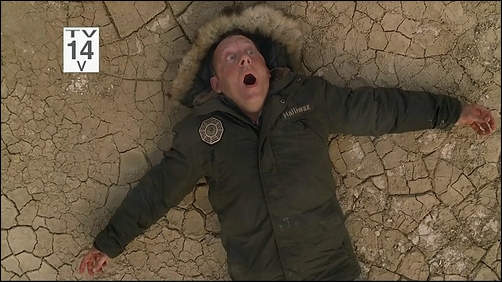 The Dharma logo on the jacket is from the Orchid station. It also matches the logo on the secondary protocol folder that Keamy pulls from the locked file on the Kahana this episode. You can see for yourself: 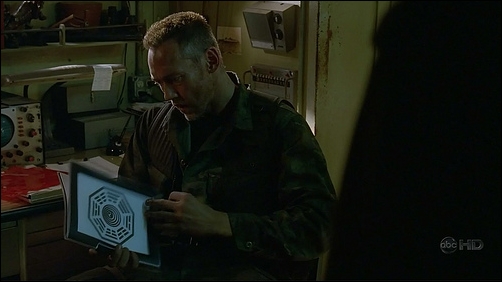 The video continues with Candle/Halliwax beginning to describe the functions of the station. He mentions that it is station six, and that it is not a botanical research facility as those watching the film might have been lead to believe. He begins to explain that the area of study there is highly volatile, and a very elaborate set of safety measures have been put into place, but he is interrupted by something seeming to fall from just above his head to the floor, and a commotion behind him. This is where it gets fun. A tech runs into the room and says “Oh my god, it’s 15!” referencing the rabbit now sitting on a shelf behind Halliwax. The number 15 bunny is, of course, the one he’s currently holding in his hand. He asks how long they set the shift, and screams to keep them away from each other, no doubt remembering what happened in Timecop when Ron Silver touched his future self and they both melted into protoplasmic goo.

Now, besides all that, the most important thing Halliwax mentions is something we’ve discussed here previously – The Casimir effect. The Casimir effect is a proven phenomena in quantum physics that describes an area of negative space or energy. Imagine, if you will, that the normal fabric of space time has the consistency of a sponge. The solid surfaces of that sponge represent visible and qualitative space-time and energy. The holes in the sponge are pretty much just empty fields of space and energy. These holes represent, in a crude way, the Casimir effect. The effect is important in quantum physics as it is one of the cornerstones of wormhole theory and, subsequently, faster-than-light travel. If it were possible to harness the effect and create a negative region of space-time, it might be possible to stabilize a wormhole. Basically, it might be possible to “squeeze the sponge” and bring one or more of the positive matter surfaces together.

What does all this have to do with what’s happening on the island? Well, everything, really. First off, it would serve to explain both the time dilation that’s going on and being observed by Faraday, as well as the matter transference that we see when Ben wakes up in the Sahara desert. It would also explain why he later asks about the date, as any field generated via the Casimir effect may be able to transport matter at faster-than-light speed, which, of course, could shift that matter along space-time.

I’m quite sure that this effect could explain some of the other phenomena on the island such as why Richard Alpert never seems to age, and why the island is largely impervious to outside detection. This might also tie in with my previous thoughts on the Hatch and why that button needed to be pushed to keep the Swan online and the energy dissipated. If the island exhibits a natural Casimir effect, it could theoretically cause the island to exist partially inside one of these negative zones of energy. Time would be skewed forward and back, it could “blink” in and out of the phase state of the natural world, and light, itself, would bend and seem strange, just as Faraday mentioned when he first landed on the island.

I’m quite sure we’ll be revisiting this topic before we’re wrapped up here in a couple of weeks with the season finale.

Until then, keep thinking those thoughts and if you have an epiphany, tell me something good.

Chris Kirkman is a graphic designer/photographer/journalist/geek extraordinaire with way too many Bruce Campbell movies in his library. He is still hoping that Lost will end when Bob Newhart wakes up next to Suzanne Pleshette, complaining of a strange, strange dream. You can contact him at ckirkman@hobotrashcan.com.