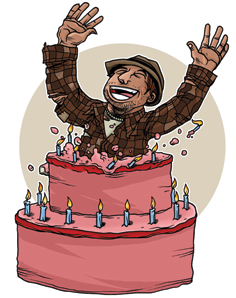 If you’ve ever seen photos of the contributors of HoboTrashcan, you already know they are all perfect 10s. And fittingly, as of yesterday, HoboTrashcan is 10, as well.

That’s right, HoboTrashcan was originally launched August 23, 2005. (Yes, they had the Internet back then. You just had to walk uphill in the snow to access it.)

In honor of the site’s decade of destruction, we thought we’d look back at 10 of our favorite moments over the years …

10. Murphy’s Law – In which I attack a nationally-syndicated movie critic

In one of the more bizarre moments on the site, Joel Murphy went public with a nasty email he received from a nationally-syndicated movie critic he reached out to for help. The critic, who happens to share a name with a certain James Bond actor, actually left a comment on the column continuing to attack Joel. In the long run, as newspapers continue to die out and Joel now regularly attends movie screenings, it’s safe to say HoboTrashcan prevailed.

Aaron R. Davis’ friend Harlan came up with the following theory while watching Steven Spielberg’s films: “Penis symbolism is everywhere. Spielberg is terrified of not being able to measure up, so it’s all about either conquering it or mastering it. And that’s it.” Davis applies this theory to wide variety of Spielberg’s films in this fantastic column.

8. Hanging Around … the set of Things I Don’t Understand

Indie filmmaker David Spaltro generously invited us on to the set of his film Things I Don’t Understand to watch them make movie magic. We interviewed members of the cast and crew to find out what goes into making an independent film in New York.

When Ned Bitters wrote a column saying that people don’t actually like Bob Dylan’s music, they just pretend to like it to seem sophisticated, it opened the floodgates. Dylan supporters flocked to the site to take umbrage with Bitters’ claim. Whether you are pro-Dylan or anti-Dylan, the entire debate is highly entertaining to read.

6. Poppin’ Molly’s Handy Guide to Navigating Your Facebook Page in the Midst of the Baltimore Riots

The recent Baltimore riots were a tense time, but Molly Regan’s ability to discuss them with grace and humor was truly impressive.

When The Dark Knight Rises was released in theaters, we tracked down the creators of the comic book villain Bane to talk about the character’s origin.

Fontina Turner served up these Breaking Bad themed breakfast sandwiches for you to make at home … or in your meth lab.

In a surprisingly-candid interview, the talented voice actor opened up about his rough childhood and his struggle with addiction. He also talked about his beloved stint on Futurama and even did a few of the voices.

These days, it is widely accepted that The Wire is the greatest television show ever made. (They teach classes on it at Harvard, for goodness sake!) But back in 2005, when the show was still on the air, it was largely overlooked. But HoboTrashcan did all it could to promote the show, including interviewing as many cast members as possible. In fact, the day the site launched, it featured at interview with Omar himself, Michael K. Williams.