I’ll warn you up front – most of you who read this post will dismiss it outright. You’ll probably simply chuckle at the paranoid blogger and his crazy conspiracy theories, dismissing this entire column as nothing more than the rantings of a wild man, as though I’m wearing a tinfoil hat and shouting at you from a street corner.

But one day in the near future, when you are drawing your blinds at night in hopes of obscuring yourself from the view of Google’s all-seeing eye or, worse yet, trying to keep a low profile to avoid being whipped once again by the sadistic guards at the Google work camps, you’ll wish you had taken my words more seriously.

So call me crazy if you want, but just remember that I warned you.

Remember, a few months from now when I mysteriously disappear one evening and all traces of HoboTrashcan are suddenly removed from the queue of your favorite search engine that I was the one telling you all that Google must be stopped before it’s too late.

Now look, I realize how crazy this sounds. Everyone loves Google. Google has become so ingrained in our daily lives that it’s basically impossible to remember what life was like before it existed. Google has given us so much – the answers to all of our questions at the touch of a few keys, the absolute best email client on the Internet and a comprehensive map of the United States that provides directions to anywhere you want to go, complete with a 360 degree view of the actual streets you will be traveling on. In this digital age, they are the ones giving us all of the cool shit those futuristic science fiction movies all promised us.

But lately, there have been a string of stories that have me beginning to wonder if all along they have simply been lulling us into a false sense of security to distract us from their eventual takeover. (Again, just like in all of those futuristic science fiction movies.) Specifically, there have been three stories recently that have me beginning to wonder if an evil scheme is perhaps in the works over at Google Headquarters.

First, there was the story about Google secretly testing a fleet of cars capable of driving themselves. (Tests, by the way, that they ran on real roads with traffic around them without even bothering to check first with the government or local law enforcement to see if these robot car driving tests were legal.) Then last month there was the disturbing report that a different set of Google cars, the ones with cameras mounted on them to take photos for Google’s Street View service, “inadvertently” collected emails, passwords, phone numbers and URLs from nearby encrypted wireless signals while driving around. And now, Gawker is reporting that Google is building a “mini-metropolis” that will include offices, sports facilities, child care and housing at its California headquarters in an effort to keep their best employees on Google-owned land at all times.

These various news articles don’t sound like much when taken separately (in fact, chances are you’ve heard these stories already without thinking twice about them), but when added together, Google’s nefarious master plan begins to become more clear. This is undoubtedly phase one of a grandiose plan that will position them as unstoppable supervillains.

Think about it. First, Google builds a powerful search engine that amasses all of the collected wisdom of the Internet and controls how that information is disseminated to the public. Then, Google makes the best email client on the market today, getting the vast majority of us to switch over to Gmail. Those of us that made the switch are already under their thumb – they have access to all private messages and information (and, if celebrities like Brett Favre and Greg Oden are any indication, Google probably also has more cock shots than they know what to do with). But they still need to get into the rest of the populace’s emails, so they send out their Street View cars to “accidentally” collect data on everyone else.

Speaking of those cars, they are also tasked with creating comprehensive 360 degree imaging of our streets, which will no doubt prove invaluable when Google begins plotting their evil missions. (Before Street View, Google already had satellite images of the entire United States.) That was phase one of controlling the roads. Phase two is clearly to seize control of our cars themselves – convincing us all to buy robot cars that can drive us wherever Google wants us to go (including off a cliff if we step out of line). Google also recently released Hotpot, a FourSquare-like program that will no doubt allow them to track the movements of everyone on foot who has a cell phone.

On top of that, they are now placing their employees in their own private city. This, of course, serves two purposes. First, they can fortify the city to protect themselves from any citizens who decide to revolt against them. But beyond that, this city will no doubt serve as a training ground for their foot soldiers. I envision it a bit like Project Mayhem in Fight Club, a commune with supervisors who use megaphones to shout “You are not a beautiful and unique snowflake” to employees who spend their days making soap and powerful explosives. Actually, on second thought, that seems too low tech for Google. Their real Google city will probably be run more like Hank Scorpio’s Globex Corporation in the classic “You Only Move Twice” episode of The Simpsons (where employees are rewarded by coming home to find another story added onto their house).

Once their army has been trained and all the data they need has been amassed, Google will no doubt launch their hostile takeover of the United States. It will take us a while to figure out what they are up to, though, since stories about their uprising will be mysteriously absent from our Google News feeds. By the time we realize what has happened, it will already be too late. We’ll all start frantically trying to figure out what to do – except our Google searches will yield no helpful answers and our email blasts to friends and family will never reach their intended targets. It will be a grim future that we will simply be powerless to stop.

In fact, the only silver lining will be that I get to say I told you so. 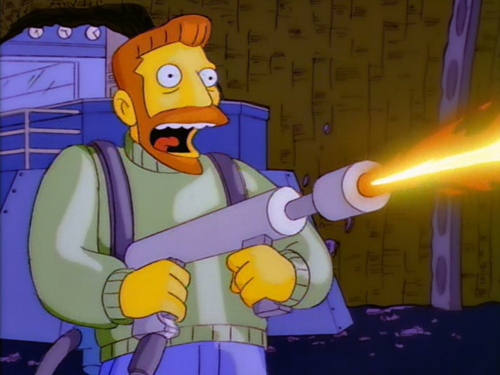