This weekend, I saw a new show on E! with the horrifying title Bridalplasty.

And, to my everlasting regret, I could not look away.

It was … awful. It was a chilling nightmare from which I could not wake. I just couldn’t look away from the terror that overwhelmed my eyes, because for a while there I was a hundred percent certain that I was about to witness the unraveling of the entire fabric of reality.

I had a nightmare recently that I was puking up worms that didn’t gross me out as much as this show.

The premise is horrifying: women who are engaged or recently married compete on a reality show in order to win their dream wedding and plastic surgery. Scarily, the women are much more excited about the plastic surgery than the wedding. They are so eager to get every tiny, elective, totally unnecessary medical procedure they can think of — for free! — that they will jump through hoops of flaming dog shit just to have a chance to talk about the possibility of getting them done.

They will humiliate themselves at every possible turn. Dude, I’m so self-conscious about my weight that I don’t even like people to see me in shorts, but these women have allowed themselves to be filmed while a plastic surgeon draws all over them with a marker like someone diagramming the different meat sections on cattle. Women who, as far as I can tell, have nothing physically wrong with them. Sure, some of them could stand to lose some weight, which they readily admit — but they seem not to have considered the possibility that going for a walk every day might be a better alternative than getting cut open for free because you’re lucky enough to have survived the longest in what seems like the most horrible sorority hazing on record.

If you’re going to film me in my underwear for broadcast while some stooge — a guy who actually tells a woman who looks like she weighs 90 pounds that she needs liposuction on her thighs — sections off my flank steak from my New York strip, it had better be because I’m getting implanted with a metal arm with laser rifle attachment. In that case, Trap Jaw me right the hell up, and make sure one of my new attachments is a Lightsaber. But I am not doing it for the chance to go to an “injectibles party.”

Yeah, just hearing that phrase made me curl into the fetal position and pray that the asteroid that will wipe out all human life was only seconds away from the atmosphere.

See, all of the women — each of them varying degrees of the Worst, Most Empty Person Who Ever Lived — have to go through a challenge on the first episode. Shanna Moakler, someone who TV tries to convince me is allegedly famous for taking off her clothes in a magazine once and marrying a low-tier rock musician, leads these twelve twits into a tent where they are confronted with pictures of themselves in their underwear. By this time, I am incredibly over-familiar with the bodies they seem to hate so much. Their job is to then cover the pictures with the new versions of themselves. Or, at least, what E!’s Photoshop brigade assumes they will look like once they get all of their surgical makeovers.

The twist, apparently, is that the new pictures have been cut into puzzles — really, just small squares — and the women have to solve the puzzle. And they are all really, really, really bad at it. It’s just stupefying. Apparently the complex riddle of where your own shoulders go is beyond the abilities of some of these gals.

And what were they competing for? A syringe. The prize for this was not to notice how incredibly vapid and empty you are in order to make this the focus of your life and to actually believe that getting some skin shaved off will magically make you a perfect person, but a syringe. The syringe is a free pass to what was called, multiple times, as if it were really a thing, an “injectibles party.” Contestants were whining about how sad it would be not to get to go to “the injectibles party.” Like actually being one of these people isn’t punishment enough, now they’re going to be destroyed inside because they didn’t get whisked away to a party where someone they actually let call themselves a doctor injects botulism into their faces?

And please, PLEASE, if an “injectibles party” is a real thing, don’t tell me. I don’t want to know. When I was a kid, women had Tupperware parties. The idea of the same group of housewives sitting around now shooting each other full of disease in order to look pretty is just too much for me to handle. In fact, I never want to hear the phrase “injectibles party” again for as long as I live.

The women on this show are just awful. One of them actually pawned her engagement ring without telling her husband about it. Another cries that she’ll always regret not being at the airport to pick up her husband from Iraq; apparently being on this sideshow was much more important to their future marriage. One girl, obviously addicted to reality television, talks about nothing other than having been on The Biggest Loser and having lost 95 pounds — she’s not making a great case for self-control and exercise by going on a show where she hopes to win liposuction. She was the same girl who threatened to cut the other contestants, by the way.

But the most awful aspect of this show, for me, is the wedding aspect.

These girls are so hung up on the fantasy of the Perfect Wedding that they’re overlooking everything they already have. A couple of the women on the show are actually already married. One of them even has a couple of kids. She’s the one who said something about how she really wanted her dream wedding so she had something to be proud of. Aren’t having a great marriage and happy children something to be proud of anymore? Sure, you can’t go on television and show that off on a reality competition, but why should you want to?

That’s the worst part of Bridalplasty, even worse than the bizarro cosmetic surgery world we’re subjected to. It’s that these women all act like they have nothing in their lives if they don’t have the Perfect Wedding. We see one woman whose husband or fiancé or whatever seems to be completely against her even being on the show, because he doesn’t think she needs plastic surgery or that they need this dream wedding. She has that kind of love in her life, but it’s not enough for her. It makes me kind of sad. So this show makes me feel sad and it makes me want to puke. I still feel dirty, days after watching it.

The show itself even perpetuates the idea that a woman is nothing without her Perfect Wedding. When the first contestant is eliminated, Shanna Moakler kisses her off with the statement: “You’ll have your wedding; it just won’t be Perfect.”

It’s why I hated this show so very, very much. Bridalplasty is bad for you. It is not harmless television. It not only perpetuates the heartless myths that perfection comes from syringes and million dollar weddings, but it participates in the destruction of self-esteem, feminism and healthy relationships. The people who created this thing and inflicted it on a television audience are bad people.

I didn’t think the reality show bar could sink any lower than Jersey Shore. But those assholes are just genetic mistakes. Bridalplasty actively makes me wish for the end of the world it so clearly heralds. 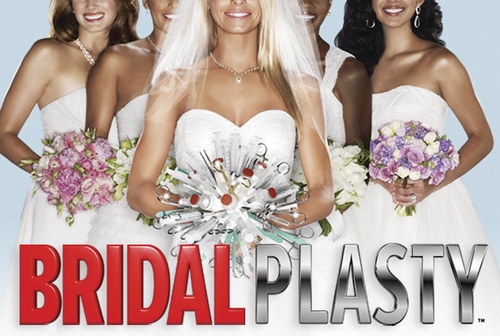