[Editor’s Note: Joel Murphy if off again acting “like a boss,” so today we bring you another special guest column by confessed hipster Nicole Alexandria.]

I have always been fascinated with people watching even from an early age.

I was the kid in grade school who at recess would sit alone reading a book in the corner secretly watching people, seeing how they act towards each other. It wasn’t because I was the awkward ugly kid as much as I never really could stand the way people interact. Once a month one of the most popular girls in school would see me sitting there alone and ask me if I wanted to hang out with her. I would always turn her down, because I couldn’t understand why she was always flocked with girls who worshiped her.

Reality television for all its ridiculous, disheartening or even soul crushing merits, allows you to socially analyze individuals, families or other groups on a grand scale that you might not otherwise come near in a natural setting. I would even go as far as stating reality television is the closest society will ever get to a human form of a zoo. You take a sect of human, place it in a cage that somewhat resembles its normal habitat and put it on display as people watch and observe hoping to see a grand fight for survival or scandalous mating ritual.

If you turn on your television you can pretty much find any sub-sect of American culture represented. On any particular day of the week you can see what it’s like to be married as midgets. Or married to a rap star. Or be a spoiled rich brat who never had to work a day in their life. You can watch as people fight, cry, whine, sleep together or completely fail at life without having a guilty conscious. You can watch drug addicts strive to recover. Or hoarders. Or cops arrest criminals. For a while you could even see people go through extreme surgeries to be more commercially attractive. You can even watch as a seemingly normal marriage with far too many children crumbles before your very eyes on national television. Welcome to the human zoo. Enjoy. Sometimes if you’re lucky, the more odd ones will even do sideshow tricks.

I would argue the greatest example of this one television right now is Sister Wives on TLC. In an unprecedented look of a real polygamist family, you see social and familial structures that haven’t been explored previously due to the legal implications of outing themselves. Actively married to three women already, the male protagonist courts and marries a much younger and skinnier bubbly woman WHILE continuing to sleep with the aging, much more plump and seemingly more rigid previous wives. It’s almost revolutionary. But wait! It gets better. Skinny Wife Number Four moves into a house rent free and is partially supported by Major Bread Winner Wife Number Two and not a single cat fight is hinted at on the horizon. It’s genius. Does welfare know about this? How is this even illegal?

Despite being a ridiculous premise, the family somehow works. They seem totally normal and, even dare I say it, loving. The wives actively support each other. One takes care of the others children while at work and another does food shopping. The children (which could easily populate their own football team) grow up together in a loving environment as opposed to the bitter separation of several broken homes. They all seem relatively well-adjusted, which is uncommon in the reality TV world. The male patriarch, who seemingly always has a smile on his face (at least on camera) – arguably because when one wife has a headache there are three other options to choose from – seems like a loving and doting father who cares for each of this children immensely. Each is fed, clothed, clean and happy. It almost forces you to say, “Well shit, who am I to judge?”

It’s also surprising, to anyone not from a small area in Utah, how common polygamous marriages actually are. It’s easy for an American to look at countries where polygamy is common place as different or inferior, but this is on mainland soil. These are Americans. Just like you. Who if you saw on the street would seem like normal and rational people. All of the woman who entered the marriage were also from polygamous families themselves. Each grew up with the idea that multiple wives were an asset and not a creepy loophole for their husband to sleep around. The third wife even went as far as saying in one episode that she wouldn’t want to be married to a man alone. That statement must make anyone interested in psychology salivate.

I wouldn’t enter a polygamous marriage myself, but then again, I’d never spray my skin orange and sleep with as many women as I could on national television either. But as long as I’m not off doing more important things, I’ll watch.

Why not. Welcome to the monkey house. 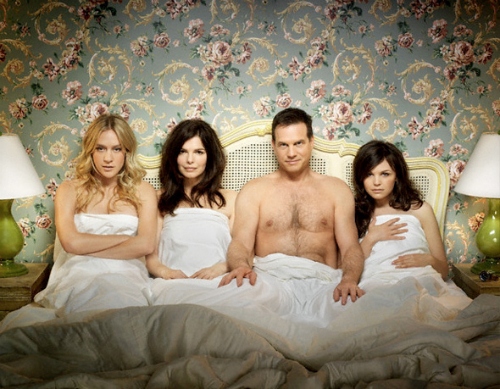