EXT. CITY STREET WITH NO TRAFFIC THAT LOOKS LIKE AN UNDERPOPULATED TV SET. DAY.

Ken Jeong and a female companion approach a movie theater and look at the marquee. Two movies are playing: Uber Cute and War Troll. Not funny, but this ad was apparently put
together in two seconds. Also, one movie starts at seven and the other at eight, but there is almost no one street and it’s very sunny, implying that no one wants to see either movie, or they’ve decided to come and line up six hours early.

Ken Jeong sips his can of Coke Zero and then makes a grimace that is probably supposed to say “satisfied, refreshed, thirst quenched,” but is really more of an accurate representation of
the soul-killing disappointment one feels when first tasting Coke Zero. No, no, it tastes really good on its own, you’re not settling at all.

Ken glances at his can with seemingly no motivation. He reads the words “Real Coca-Cola taste AND zero calories,” which is a half-truth at best.

KEN: I don’t do “or.” “Or” makes you choose. I want romaction: cyborg meets his baby mama. Waah.

Ken counterintuitively decides to keep running with this comedy bit, despite the fact that his female companion is looking at him like he’s insane and this isn’t 2006 when this kind of shit
was mildly amusing at best.

KEN: [Straight to camera, in that aggressive, hostile manner that he apparently thinks is hilarious] Who wants “or”? I’m done with “or”!

Ken checks out his reflection, preens, gives his can of wretched chemicals to a passerby, and starts singing “Or! What is it good for?” in a terrible, terrible parody of Edwin Starr’s “War”
to no one in particular. It’s stupid and clumsy, but apparently being bad at something and doing it anyway is also comedy because Judd Apatow doesn’t try very hard and now we all have to
suffer because of it. Yes, yes, doing the Robot is always hilarious.

Also, a black cop shakes his head in a funky way because without this little bit of stereotypical minstrelsy, we wouldn’t know what the joke is or something.

Stoners giggle until they shit themselves because this commercial is on Adult Swim and as we all know the Adult Swim audience demands only the best quality because they love Seth McFarlane
and saved Family Guy. That’s how you know Family Guy is a high quality show, because it got revived because it was such a hit on Adult Swim, and as we all know, making stoners giggle is incredibly difficult to do. Fox could probably save themselves the millions of dollars they spend giving McFarlane and that piece of shit Alec Sulkin and their entire gang of idiots free reign to make all of the hysterical rape and Asian jokes they want and just hire someone to jangle their keys at the camera for a half-hour and they’d get the same ratings on Adult Swim. I guarantee
you. Seriously, just put on Bob Ross reruns for five hours and stoners will sit there, crunching away in pure delight.

Ken Jeong walks back over to his female companion, triumphant that he has told the world what’s what. Millions of viewers are glad that if Ken Jeong had to make a choice between doing the only two things he is capable of doing, hostile non-personality has won out over stereotypical Asian voice.

KEN: I told you: romaction.

WOMAN: Yeah, I heard you, and I saw your little dance of defiance and all that, but romaction isn’t a thing. Like, you know that no one’s going to go into the projection booth and somehow
quickly edit both of those movies together just because you got wired on Diet Coke’s poser cousin and threw a little hissy fit on what seriously looks like an exterior set from How I Met
Your Mother during lunch hour? Right? Right, Ken? I mean, you get that you actually have to make a choice here, right?

WOMAN: Well, you’re actually not, because now instead of choosing romantic comedy “or” action, you have to choose ridiculous chemical-addled fantasy movie that doesn’t exist “or” actual movie. So — and I know what I’m hoping happens here since this is like being on a date with a child who doesn’t want to go to bed yet — pick one: delusion “or” reality.

WOMAN: Yeah, no, I heard. But, seriously, this is life, you either get one thing or the other. Something or nothing. So which is it? Movie, or nothing?

Ken suddenly sputters and doesn’t know what to say. He halfheartedly tries to resume his little hipster jig, but then remembers effort isn’t cool and stands there, wondering what happened to
his can of Coke Zero.

WOMAN: Yeah, you’re 43, not five. Call me when you’re ready to just make a decision like a person.

She walks away, leaving Ken standing there, suddenly incapable of making a decision which way to move.

America sneaks up behind Ken Jeong’s career as a minor comic actor and locks him in the car with “Gangnam Style” and the media’s sudden decision to treat Seth McFarlane like he’s some
beloved entertainer who should be a star on his own – like he’s fucking Alfred Hitchcock or Walt Disney or something – and then pushes the car into the ocean. 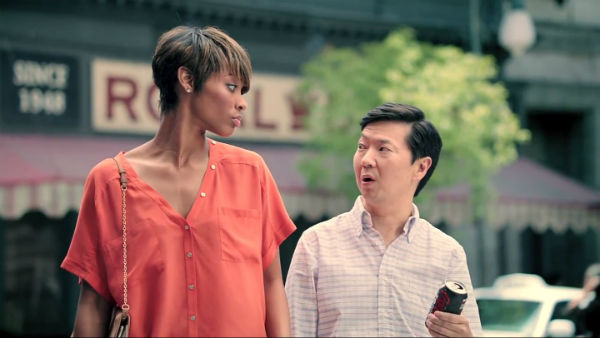