[Editor’s Note: Joel Murphy is off trying to find himself, so today we bring you a special guest column by Louis Miles.]

Americans have it good.

My metric for that statement is simple. If any random person had to choose between living in America, or blindly throwing a dart at a map, and living where the dart landed, everyone would choose America. Don’t get me wrong, this country has problems, and plenty of them. Most of us, however, can expect to go about our day without guns and hate entering into the equation. Speaking from the anemic Jewish perspective, that’s a damn fine notion to embrace.

I only bother to mention this because I’m about to complain. As someone who considers complaining to be a personal pastime, I’ve come to understand that first complementing your subject makes you seem at least not fully despicable. And, if there’s anything I want said about myself, it’s that I’m not fully despicable. So, allow me to venture forth with the aforementioned bellyaching .

Commercials make no sense. Now, I know you’ve heard that before. Hell, if you have but two mere brain cells playing diffusion-poker in your skull, you’ve thought it before. You’ve seen a commercial before for a deodorant you already use and can only notice that women aren’t flocking around you, demanding to fellate your armpits.

So you know that, and I know that. Guess we’re done here, right? Well, that would certainly make for an uninteresting bit of reading. Commercials promise bullshit and they lie. That’s the most simple tenet of marketing. Let’s go deeper then. After all, it’s not the lies I have problems with, it’s the truth, and the truth is this. We have so much shit in this country that we have formed industries around pedaling it. That’s a truth we’ve all been comfortable with for some time but only due to the fact that we simply don’t think about it all too much.

Say we go back to that map I mentioned in the first paragraph, and say that dart landed on Ethiopia, then I went to Ethiopia and fished out a starving native and brought him back to America. He’d obviously be floored by the mere amount of shit in this country. Here, we’d have a guy who had likely never had a full belly in his life and he would be inundated with the means to sustain himself in almost an instant.

What in the flying fuck would he make of a commercial about food? Not only do we have enough food that we aren’t dying of hunger, but we have so much fucking food that companies are actually fighting for us to be their consumers. Food companies have marketing budgets! Marketing budgets! Meanwhile, back in Ethiopia they don’t even have a god damn food budget!

And medicine! It gets even crazier! Not only do we have life saving medication, it has to be flouted on television at the expense of millions of dollars. New flavors of medicine are advertised every day. Children have to be tricked into taking medicine, not because it will save their god damn lives, but because it tastes like fruit punch!

Here’s the craziest part, commercials are essentially a tax. When you a watch a show on network television, you are in fact paying for it. You’re paying for it with your time. Instead of forking over the 10 bucks a month for HBO you’re choosing to subject yourself to one minute of commercials for every two minutes of content. That’s how it works. But what about our buddy from Ethiopia? What part of the television experience do you think he’d actually enjoy? The part where hack writers shit all over studio audiences or the part where they get to find out about exciting new products that they can eat?

The bottom line is this, commercials are perhaps one of the most telling signs that your country is both doing well and has completely loss its sense of reality. Clearly, those two things aren’t mutually exclusive. Evidence of such would be my retarded pet cockatiel, and the TV personality Nancy Grace. I’d go so far to say that success, as we have come to define it in this country, almost requires that loss of reality. By the definition most prescribe to success in this country, people must acquire more shit, in more places. That is what has become of the American dream.

Now, this is the part where I turn it all around. For, on the off chance, that you took any of this seriously, it would be rather depressing.

I love how we define success. I love acquiring shit, and I have no problem with it. I love that when I watch television there are commercials pedaling shit that I don’t need. 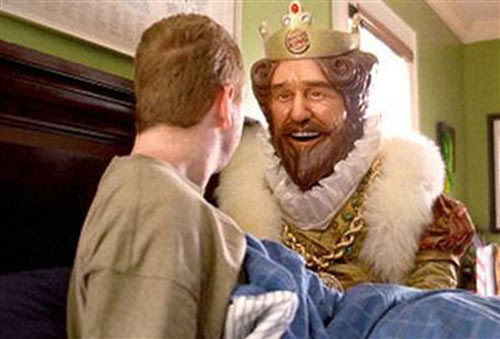