Yesterday, billionaire mogul Sir Richard Branson unveiled his new single-person submarine, Virgin Oceanic, which he will use to explore the five deepest parts of the ocean, setting as many as 30 Guinness World Records in the process. The sub, which cost $17 million dollars to build, is made of carbon fiber and titanium and is capable of staying submerged underwater for 24 hours at a time.

Branson claims he is doing this for scientific and educational reasons. He told reporters: “The last great challenge for humans is to explore the depths of our planet’s oceans.”

However, I can’t help but wonder if there isn’t a deeper, more sinister motive. Perhaps Branson is really searching for buried treasure or lost artifacts to further his empire. Perhaps he is seeking out Cloverfield style sea monsters to capture and unleash on his enemies. Or perhaps his ultimate goal is to use his assassin Jaws and a series of nuclear missile attacks to destroy civilization while he hides safely in his underwater base named Atlantis.

Branson is a really fun and charismatic guy who seems to be using his wealth to do some really amazing and unique things. However, every time he announces a new venture, I can’t help but wonder if it’s all part of some master plan to destroy James Bond once and for all.

Don’t believe me? Just read this quote that Branson posted on his blog, explaining the reason he built Virgin Oceanic:

“What if I were to tell you about a planet, inhabited by ‘intelligent’ beings that had, in the 21st Century, physically explored 0 percent of its deepest points and mapped only 3 percent of its oceans by unmanned craft, when 70 percent of that planet’s surface was made up of water … Then I tried to convince you that only 10 percent of the life forms inhabiting that unknown world, are known to those on the surface – you’d think I’d fallen asleep watching the latest sci-fi blockbuster! Then you discover that planet is Earth …”

The statement is ominous, smug and a bit condescending. It’s totally something a supervillain would say while trying to explain to the public the genius of his vision for a brighter future. The statement might as well have ended with Branson typing: “Muahahahahahaha!”

Still not convinced? Let’s take a look at Branson’s previous venture – Virgin Galactic. Branson created the first commercial spaceline, which he plans on using to shuttle rich patrons into space on sightseeing tours. The ship will also be used by scientists at the Southwest Research Institute to conduct “valuable microgravity, biology, climate and astronomy research.”

What is the point of this research? Perhaps it’s all part of Plan B, in case his underwater plot is foiled by Mr. Bond. Branson, once again aided by his deadly assassin Jaws, is undoubtedly building a secret space station (kept hidden by a special radar jammer) that he will fly to as he releases 50 globes containing deadly toxins into the Earth’s atmosphere, destroying all humanity.

Sound far-fetched? Perhaps. But would you really be that surprised if you found out tomorrow that one of the astronauts on Branson’s Virgin Galactic missions was named Dr. Holly Goodhead?

If you still aren’t convinced, let’s take a look at Necker Island, Richard Branson’s private island. Sure, Branson claims that he uses the island to house rock stars on his label to give them some much deserved rest and relaxation, but could there be more to it than that?

Perhaps Necker Island is where Branson plans to arrange the sale of his plans for state-of-the-art solar power plants to the highest bidder. And when James Bond shows up to stop him and to destroy his solar-powered gun, Branson will undoubtedly challenge him to a duel on the beach.

And what about all of the Virgin musicians Branson invites out to the island? How do they fit into this? Well clearly, Branson is going to use them to write lavish, ridiculous theme songs for each of his adventures.

At this point, it should be clear that Branson is modeling his life after James Bond villains (and that he clearly has an affinity for Roger Moore era Bond). All he’s missing is a white cat and a few bad ass lasers. You may not believe me now, but you will when Branson’s next venture involves buying Fabergé eggs at auctions and starting his own Virgin Circus. 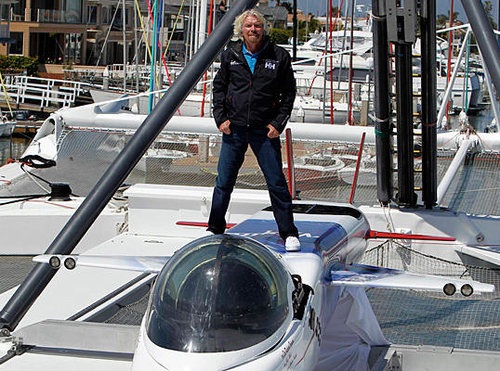