Most romantic comedies are about two people who, through a series of unfortunate circumstances, are unable to get together, even though it’s clear they belong with one another. Once they finally overcome their obstacles and embrace for that first passionate kiss, the music swells and the credits roll.

What’s different about The Five-Year Engagement is that it’s about two people who already had their storybook meeting and are now together and in love, but, through a series of unfortunate circumstances, can’t have the perfect wedding that they planned.

The longer things go on without a wedding, the more they start to doubt their relationship and wonder if they truly do belong together. And that is what makes this movie so compelling to watch. Sure, it has great comedic moments and plenty of colorful characters, but at its heart, this is a story about whether or not these two people belong together. Meeting someone is easy, sustaining the love you initially feel for someone is hard.

The key to making these types of romantic comedies work is coming up with believable reasons for the two characters to stay apart. For the most part, The Five-Year Engagement does a good job with this. First two other characters announce a shotgun wedding that takes precedent over their wedding, upstaging our heroes Tom Solomon (Jason Segel) and Violet Barnes (Emily Blunt). Then Violet gets accepted into a grad school across the country, which means she and Tom will have to leave San Francisco for two years to stay together, putting Tom’s dreams to become an executive chef on hold. The wedding keeps getting put on the back burner as Violet gets busy with school and Tom struggles to find his place in a new locale.

As the film goes on, the reasons the two don’t get hitched get a bit more contrived. In the end, the film unfortunately goes for an old familiar plotline that I wish it hadn’t stooped to. While the early hiccups are relatable and make them both sympathetic characters, their ultimate reason for postponing the wedding seems a bit forced and makes both Tom and Violet look terrible. (Tom’s actions in particular seem to come out of left field and seemingly happen for no other reason than to advance the plot.)

Adding to the problem is that, like many Judd Apatow produced films, this movie feels a little too long. So while the characters are making decisions that make them seem unsympathetic, the film in general begins to run out of steam and drag a bit. Luckily, it ultimately has a strong ending that (almost) makes the wait worth it. Also, the film’s use of stale donuts as a metaphor throughout the story works incredibly well and almost makes up for the missteps.

Jason Segel and Emily Blunt are both quite good in the lead roles. In order for the film to work, they have to quickly convince you that they are a great couple that is madly in love. The story they recount about how they meet is cute and helps sell them as a couple. The two also have good chemistry with one another, which makes the overall story work.

The supporting cast is quite strong as well. Fans of NBC’s Thursday night lineup will be happy to see both Chris Pratt from Parks and Recreation (as Tom’s buddy and coworker Alex Eilhauer) and Alison Brie from Community (sporting a British accent as Violet’s sister Suzie). Both give memorable performances and are given moments to shine. Pratt is great singing a hysterical cover to “We Didn’t Start the Fire” that recounts Tom’s love life. And Brie has a great scene with Blunt where the two do Cookie Monster and Elmo voices to disguise the fact that they are fighting in front of a child.

In addition to those two, the film also features a variety of other talented comedic actors, including Brian Posehn, Chris Parnell, Mindy Kaling, Kevin Hart. David Paymer and Mimi Kennedy are both enjoyable as Tom’s parents.

Overall, this is a sweet, relatable and very funny movie about two characters who you want to see end up together and get the storybook wedding they deserve. The film feels a little too long and loses its way with an unfortunate turn of events in the end, but it’s definitely worth seeing. 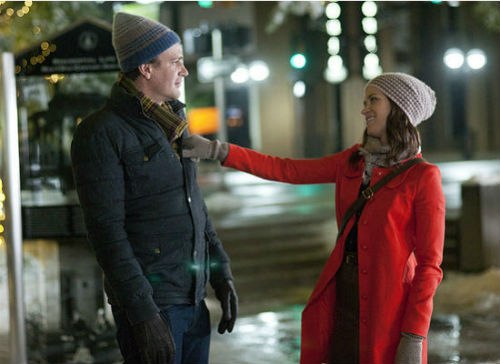