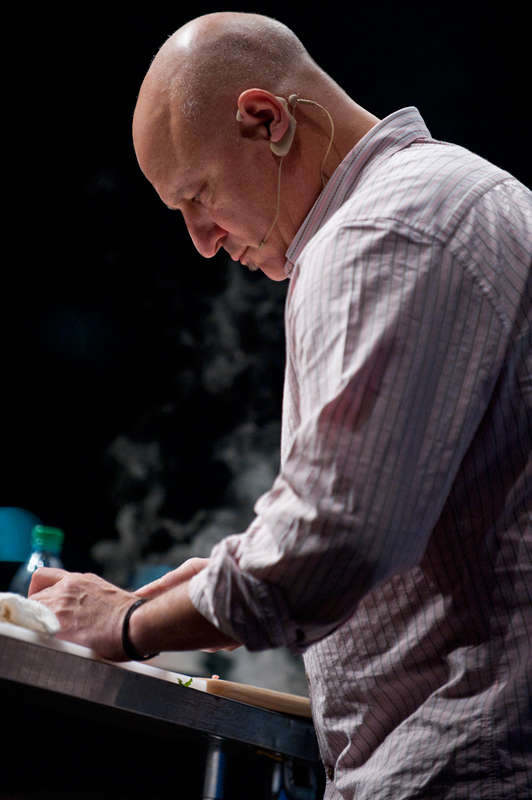 Fans of Top Chef are used to seeing Tom Colicchio and Gail Simmons judge other people’s food. But one thing they rarely get to see is the duo cooking anything themselves.

That’s what made it such a special treat when the over 3,000 people in attendance at the Celebrity Theater inside the Metropolitan Cooking and Entertaining Show in DC on Saturday got to see a live cooking demonstration by Colicchio and Simmons. Their theme was savory and sweet (with Simmons, naturally, handling the sweet and Colicchio in charge of the savory). Colicchio prepared rabbit with pistachios, which he was very excited to do since it’s one of his favorite proteins and shows never let him prepare it. Simmons made a pie with a gingerbread crust (and gin cocktails for the two to enjoy while cooking).

Throughout their demonstration, the duo took questions from the audience. The questions were fun and kept the atmosphere lively while the two prepared their dishes. They talked about Top Chef, gave advice on how to feed your family on a budget and cracked jokes. (Colicchio’s best one-liner came when he was asked the most awkward or disturbing thing he witnessed filming Top Chef and he said, “Padma in curlers.”)

The highlight of their show came when celebrity chef Giada De Laurentiis, who performed two demonstrations herself in the Celebrity Theater on Saturday, stepped up to one of the mics in the crowd and asked a question. She wanted to know who got to taste the food Colicchio and Simmons were making.

It turns out this was an inside joke between the three of them. They had all gone out to dinner Friday night and, when asked by De Laurentiis what he was cooking the following day, Colicchio joked it didn’t matter because no one would actually taste the food.

So, cheered on by the audience, De Laurentis went up on stage, bringing the little girl who was standing in line behind her waiting to ask a question with her, and sampled the Top Chef duo’s fare. It was a very entertaining unscripted moment between three colleagues who seemed to be genuinely enjoying each other’s company.

On Sunday, Food Network Star winner Jeff Mauro, former Top Chef contestant and current star of The Chew Carla Hall and celebrity chef Jacques Pépin (along with his daughter Claudine) also had their own demonstrations in the Celebrity Theater.

In addition to those demonstrations, the two-day Metro Cooking and Entertaining show had over 350 exhibitors inside the massive Walter E. Washington Convention Center in Washington, DC. There were a variety of other cooking demos on smaller stages, workshops, book signings by chefs and beer, wine and food tastings.

The Metropolitan Cooking and Entertaining Show was started in 2006 in DC. The two-day event, which is presented by The Tiny Kitchen, Inc., also takes place in Dallas and Houston annually.

Written by Joel Murphy. Photos by Brian Murphy. For more information on the Metropolitan Cooking and Entertaining Show, visit their official website.