I’d say I have a handful of guilty pleasures, but I don’t really care for the term. I have a handful of interests that lie outside of the spectrum of sophisticated entertainment and I am not ashamed of it. (I actually have way more than a handful of these, but that’s not as poetic-sounding.) I enjoy Katy Perry, reruns of The Girls Next Door and, pertinent to this column, Gigolos on Showtime.

This fairly-staged reality show follows the employees of the Las Vegas escort service, Cowboys4Angels. While I’m not really sure how realistic some of these situations are, I can vouch for how entertaining they are. Each of the guys embodies a little reality show, two-dimensional character, but they do it with a hell of a lot of swagger. Nick, the bad boy, is the most lovable bad boy on TV. Brace, the ditz, is hilarious and confident. Vin, the nerd, is obviously my favorite and a mature, put-together lad. Ash, the spiritual one, is sensual and caring. Bradley, the small-town boy, is super sweet and attentive to his ladies.

You can say all you want to about the show. It is what it is. It’s hot guys having sex with ladies that supposedly pay them. It’s a fun watch. And season six is premiering March 17. (So tune in and watch the guys totally wreck LV.)

To get penis pumped for the premiere, I’ve made a delectable Man Candy Layer Cake. Banana cake with a creamy, nut filling (what else?) is covered in buttercream and nanner candies and then topped with blow pops and carbonated sugar (fancy unflavored Pop Rocks) that explode in your mouth, not in your hand.

So pop some in your mouth and cross your fingers for lots of naked Vin this season.

* I kept the amount of candies to a minimum with this cake, but if you want to absolutely cover it, a few other topic-appropriate treats include: Mounds, Oh Henry, Whoppers, Chunky, Payday, Lik a Stik … feel free to leave others in the comment section. 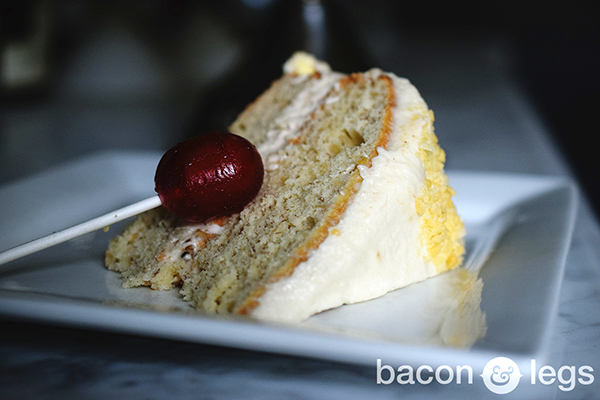 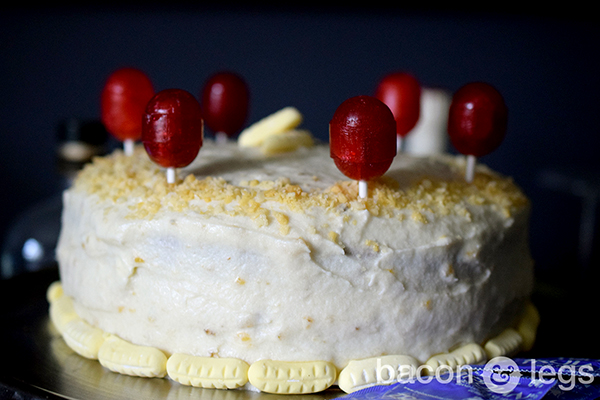