Set against the backdrop of the final days of the Vietnam War, King: Skull Island has some intriguing musings on the nature of war and man’s drive to conquer the world. Much in the way Kurt Vonnegut used aliens “unstuck in time” to talk about PTSD in Slaughterhouse-Five, the film’s colossal monster serves as a metaphor for an unwinnable war; one capable of bringing soldiers to the brink of madness.

And while I greatly enjoyed the depth this added to the film, at the end of the day, I just wanted to see King Kong take down military helicopters and fight giant lizard monsters. Luckily, director Jordan Vogt-Roberts seems keenly aware that that’s why his audience bought tickets. The film is chocked full of beautifully-rendered fight sequences, set in gorgeous jungle locales and utilizing well-timed slow motion effects to let the audience revel in the joy of a giant ape destroying any and all foes.

As the Vietnam War is winding down in 1973, Bill Randa (John Goodman), the leader of a covert agency dubbed Project Monarch, convinces the U.S. government to send his team to a newly-discovered uncharted island in the South Pacific. Randa recruits former British intelligence agent James Conrad (Tom Hiddleston) to be his guide and accomplished-photographer Mason Weaver (Brie Larson) to document the trip. He also convinces the government to give him a military escort; lead by Lieutenant Colonel Preston Packard (Samuel L. Jackson). 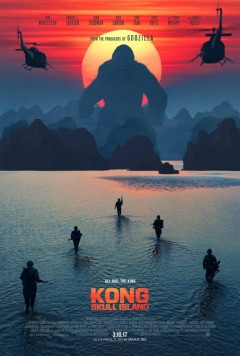 Randa keeps most of the team in the dark about the true nature of their mission. Only he and a few others know that the real reason they are exploring Skull Island is to see if the legends of its mythical monsters are true. They don’t have to wait long. The moment they reach the island, they are greeted by the massive King Kong, who they attack to little effect.

Kong makes quick work of their helicopters, leaving the soldiers and civilians scattered across the island in various teams of survivors. Two idealogical camps begin to emerge. One group believes they must kill the beast. The other begins to understand the island’s ecosystem and quickly sees that Kong is the only thing protecting the rest of the island from a bloodthirsty pack of lizard monsters.

Packard is the most determined to destroy Kong. Jackson plays the character with a fierce determination that makes the lieutant colonel incredibly compelling. From the moment we first see him in Vietnman, Jackson makes it clear that Packard isn’t ready to put wartime behind him. He eagerly accepts the transport mission to Skull Island as a way to prolong his time deployed and he goes to the island looking for one last fight. There is an engrossing Captain Ahab quality to his quest to destroy King Kong. But, more than anything, I could have simply watched Samuel L. Jackson angrily stare down a giant ape for two hours without getting bored.

While I found Jackson’s character the most compelling, the film does a fairly decent job servicing its ensemble cast. Everyone’s personalities are clear and a surprising number of minor characters are given moments to shine. The film doesn’t put much effort into developing James Conrad or Mason Weaver, but Tom Hiddleston and Brie Larson are both compelling enough actors to make their vaguely-defined characters come to life. John Goodman, as always, is particularly delightful in his scene-chewing role as a man who knows more than everyone else and John C. Reilly shows up in a fun surprise role that steals every scene he’s in.

The action scenes are inventive and always fun. The film spaces out the use of King Kong just enough that it feels exciting every time he’s on-screen. The island is also full of many other threats. The battles are highly-stylized and just over-the-top enough to be delightfully ridiculous. Vogt-Roberts has great instincts for which action tropes to embrace and which ones to deconstruct or abandon to subvert the audience’s expectations.

Vogt-Roberts also did a great job with the soundtrack. He uses the type of 70s rock music that has become synonymous with Vietnam War films, but avoids obvious and well-worn soundtrack choices like Creedence Clearwater Revival’s “Fortunate Son.” He opts instead for songs like The Stooges’ “Down On the Street,” The Hollies “Long Cool Woman (In a Black Dress)” and The Chamber Brothers’ “Time Has Come Today” to evoke the feeling of the 70s without feeling clichéd. (Though he does sneak some CCR in there, too.)

Ultimately, Kong: Skull Island is a joyous film with charismatic performances, a pleasing score and all of the ape-on-lizard action you’re hoping for. There’s just enough of a deeper theme to keep it from being mindless action, but the film never forgets that you’re there for the spectacle. So if the idea of a gas-mask-wearing Tom Hiddleston taking down lizard monsters with a sword in slow motion while a bad ass 70s soundtrack plays excites you, then this is the film for you.