This week’s inductee into the “Overrated Hall of Fame” is … returning home run balls.

Memorabilia experts speculate that the ball might have fetched a quarter million dollars at auction. Yet this schlub, who makes 23 grand a year and has $100,000 in unpaid student loans, hands this quarter million dollar winning lottery ticket over to Derek Jeter, who has made over $200 million playing baseball and millions more in endorsements. After he retires, he will be able to use his reputation, accomplishments, personality and winning lottery ticket of a face to continue to make millions.

Giving this guy back his baseball isn’t selfless. It’s downright irresponsible. I guarantee you that this kid is never again going to have a quarter million dollars land in his lap again. This was his one shot in life at having a nest egg most of us non-New York Yankee glamour boys will never know. But he gives it away all for the chance to shake the hand of a guy who probably doesn’t even remember his name by now.

Why does Derek Jeter need that ball? What can it possibly add to his already ridiculously fortunate life? He’s one of the richest athletes in the world. He’s almost universally beloved. Hook a Red Sox fan up to a lie detector and the machine and the needle would go crazy if the Beantowner said he hated Jeter. He’s a first-ballot Hall of Famer, a five-time World Series winner and – perhaps best of all – has had his pick of the finest New York quiff available for the past 15 years. Even super dreamy and more talented A-Rod has to wait at the pussy buffet until Jeter is done making his selection.

And now he also has the ball from his 3000th hit. Is it on a mantel in his condo? Stashed in his nightstand behind his black Amex card and a gross of condoms? (In Jeter’s world, also known as “a week’s supply.”) Or in a safe deposit box where he’ll never see it again, at least until the Hall of Fame asks for it, where they can display it for free … oh wait, I mean where they can make money off of fans payings pay 20 bucks a pop to glimpse the hallowed ball that our Jeter-worshiping hero just gave away.

I hope the kid’s family is duly pissed. I know I’d be infuriated if one of my brothers did that. My dad would have pulled out his favorite epithet, “shit for brains,” and hurled it at me or my brother with extra venom. What if one his loved ones has a medical emergency that insurance won’t pay for? How about putting a huge down payment on a house, resulting in a tiny mortgage payment that would allow for easier repayment of those crushing student loans?

Maybe he could ask Derek Jeter for some money, or maybe even for a low interest loan. But that won’t work, because Jeter’s people will no longer let this maniac within 405 feet of him, which is, ironically, the distance that home run traveled.

This is nothing against Jeter. I love the guy. Name another athlete of his stature from the past 20 years who has his professional and personal reputation? The only thing I blame him for is accepting the ball. He should have said, “Aw kid, that’s real sweet of you – and a bit crazy and stupid, too – but just knowing I got 3000 hits is reward enough. I don’t need the damn ball nearly as much as you do. Thanks anyway. Here, let me sign it. You’re a prince. Now, before you sell it, please, for the love of Mickey Mantle, get yourself some help. Your decision-making skills are a bit skewed.”

But he traded a certain degree of financial security for a handshake, a photo op, fawning press coverage and tickets to future Yankee games. It’s sick that his eagerness to win a moment of favor with a Yankee legend is more important than a couple of hundred thousand dollars in the bank. And again, don’t tell me it’s about “giving.” Had he given the ball to a charity so that they could sell it, then I’d call the kid Christ-like and marvel at his generosity. But he gave it to a man who already has it all.

Who knows, maybe this insanely lucky bastard will be there when A-Rod hits the two home runs that tie and surpass Barry Bonds on the all-time dinger list. He’ll once again have to choose between a major payday or a handshake and some used Yankee bats and jerseys. Will he keep them this time? With this nation’s unholy adulation of sports stars, I’m guessing that after the game, he won’t have the balls. 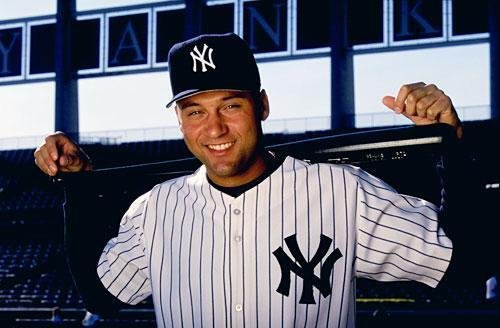